Dispatches from the Far-Flung Crime Community

—The crime community is manifold, its members peculiar. These are their stories.

Megan and Laura do everything together. In the car, on the way to work, they listen to true crime podcasts and discuss their favorite serial killers. For Christmas, they give each other murder-themed gifts. If Laura goes on a date, Megan will text her obsessively, making sure she hasn’t been kidnapped. If Megan and her husband go out for drinks, Laura will probably be there, too. Even their aesthetics are perfectly aligned: both have finger tattoos, while Megan’s tongue stud and green hair are the point to the counterpoint of Laura’s winged eyeliner and iridescent fingernails. And when they tell each other their deepest, darkest secrets, it’s not just because they’­re best friends—it’s because they can’t legally tell anyone else.

Megan and Laura are probation officers who work in the mental health unit of a Chicago probation department. For each woman, a lifelong obsession with crime (and with Clarice Starling, from Silence of the Lambs) eventually led them to the world of probation, a world of paperwork and home visits, of listening skills and emotional intelligence, of empathy and a certain casual bravery. Their unit works with former offenders who suffer from mental health problems; their goal is to find the clients who will most benefit from the tools they have at their disposal.

This means that not everyone with mental health issues qualifies. If someone is psychotic, but it’s drug related—or depressed because they’ve been doing jail time—there are better units for them to land in. While Laura and Megan will rarely take on a violent offender, they will work with offenders who’ve been violent while actively symptomatic—say, someone who resisted a nurse while in the grip of psychosis. They don’t diagnose, either; when they head to the jail to see if a specific person is eligible for their unit, they go to verify symptoms, get a self-report from the individual, and check any documented mental health records in the hopes of concluding that yes, this person has a diagnosable illness, and they have the tools to help them re-integrate into society.

Laura came over to the unit from a career as a social worker, while Megan previously worked with probated sex offenders. (Both women have their master’s degree in forensic psychology.) Despite their childhood fascination with crime, neither wanted to work as a police officer. Probation is “kind of the best of both worlds,” says Megan, “because we get to have kid gloves on where we’re helping and linking [people up with services], but also we get the law enforcement side: ‘No, you have to follow these rules.’” Their coworkers are about 80% female; the men, they’ve noticed, do want to become cops. Probation officers have to be extremely good at listening and high in emotional intelligence—traits where women tend to have an edge over their male counterparts. “I can’t speak for all women,” says Laura, “but we want to help people but don’t want to, you know, carry guns and arrest people.”

Article continues after advertisement
Probation officers have to be extremely good at listening and high in emotional intelligence—traits where women tend to have an edge over their male counterparts.

For citizens outside of the criminal justice system, who encounter lawbreaking through Netflix and the media, it’s easy to assume that any high-profile criminal deserves jail, or worse. A sentence that’s “only” probation can seem like a cop-out, a sign of corruption behind the scenes. But that’s not necessarily true. For any given crime, there’s a minimum and a maximum sentence, and this means that probation is often on the table (as the minimum sentence) even if the public isn’t aware of it. Additionally, it’s not unusual for a sentence to be reduced because of extenuating circumstances: for example, someone might get charged with a felony for attacking that aforementioned nurse, but once it becomes clear that they were in the middle of a psychotic episode, their charge gets dropped down to a misdemeanor. And now they’re eligible for probation.

But people who don’t work in law enforcement often don’t understand these sorts of intricacies—and Laura and Megan aren’t officially allowed to talk about any of it. Probation is, after all, completely confidential. Sometimes, when a high-profile offender is given probation instead of prison time, their friends will be outraged, and the two of them find it difficult to explain why they’re not equally upset. “I’ll say, ‘No, that gets probation all the time,’” says Laura. “People don’t understand that. People will say, ‘They should be castrated!’”

Not only are their concepts of a “light sentence” different than their friends, but the things that shock their friends simply don’t shock them. “I was talking about someone’s background,” says Laura, “and I was like, ‘Yeah, they have four domestic violences and a DUI, that’s not that much.’ And this person was like, ‘Not that much?!’” She laughs. “But we see pages and pages [of crimes for a single offender]. I’m like, ‘They only have two pages, that’s nothing,’ and people are like, ‘You’re insane.’”

As far as risks of the trade go, the women say that it’s a lot of paperwork, a lot of meetings within the safety of their office building. Of course, not even probation officers are safe from unwanted attention. If a client is starting to get lovestruck, or repeatedly harassing one of them, they’ll pass him off to a male coworker. Megan remembers a time when a client asked if he could see her “outside.” She responded that she hoped to never see him again—and that that was a good thing. “Don’t come back here,” she said. “Don’t get probation again.”

A more frightening interaction took place during a home visit, when an extremely friendly and animated client suddenly locked the door behind Megan. “How long are you staying?” he chirped. The client wasn’t intending to be threatening—he just wanted to hang out—but Megan was unamused. Probation officers in the mental health unit aren’t armed (they only carry pepper spray and a radio), and so they’re particularly disinclined to put themselves in volatile situations. If a client is especially unpredictable during a home visit, or if the officers are met with hostility by neighbors who tend to assume that they’re cops, they may cut the visit short or choose to delay it until the next month.

Most of Megan and Laura’s clients, though, are simply trying to make it through the day. And there aren’t always enough resources lying around to make their lives easier—or even functional. There’s not enough housing available for people on probation, for example, and so a client who comes out of jail without a home may soon enough be back on the streets, despite everyone’s best efforts. The majority of their clients are on Medicaid, but it’s increasingly hard to find providers who will accept it. And, since probation is confidential, much of the responsibility lies on the client: to show up to meetings, to give their correct home address, to visit the doctor when they’re supposed to visit the doctor. If a client gives a fake address, and then skips a meeting, it’s possible for them to slip away from their probation officer forever.

“I try to be respectful, no matter what the charge is, and I always did a really good job with that with the sex offenders,” she says. “But it got a bit old, after having kids.”

“Thankfully not all cases stick with you,” says Laura. She pauses for a moment. “There are, of course, some that do.” Megan, thinking of her time in the sex offender unit, adds, “You kind of get used to whatever and learn how to compartmentalize.” That being said, she’s glad to be out of that particular unit. “I try to be respectful, no matter what the charge is, and I always did a really good job with that with the sex offenders,” she says. “But it got a bit old, after having kids; I was like, ‘I don’t think I want to do this anymore.’”

All of this is difficult to convey to the rest of the world, a world that thinks of crimes and jail time in extreme and often black-and-white terms, unaware of the system’s inner workings, not to mention the inner workings of the system’s employees. But Laura and Megan are generally too busy to stress about all of that. When they’re not listening to My Favorite Murder and Last Podcast on the Left on their way to home visits, they’re chatting about their favorite historical crimes (Laura’s partial to Ed Kemper, the matricidal giant), or scheduling times to hang out outside of work (difficult, since Megan has two kids and is trying really hard not to turn them into “tiny serial killers”).

Even their romantic lives are tinged with the criminal element. Before Laura met her current boyfriend, Megan would do serious detective work on all of her Tinder dates. Once, going off of nothing more than a first name and a place of work, she discovered that a potential date already had a girlfriend. Another time, she received a text from “Laura” while on a date that read, “My date’s great! He’s so handsome!” Megan knew immediately that the text wasn’t from Laura, and told the texter that she was sitting right behind him in the restaurant, watching. (She wasn’t.) His syntax had tipped her off. “Laura would say ‘hunk’ or ‘babe,’” she says, laughing. “I would never say ‘handsome,’” agrees Laura.

And then at night, when all the crime of the day is placed neatly back into its files, sometimes Megan and her husband will watch a movie. Occasionally, her husband will exclaim over something onscreen: “Oh, that’s so bad!”

Crime and Punishment in Shogun Japan 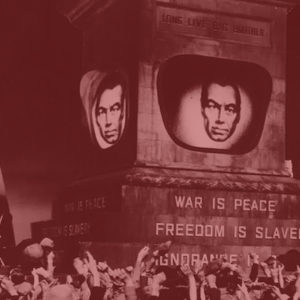 In George Orwell’s 1984, one of the main characters famously says, “If you want a vision of the future, imagine a boot...
© LitHub
Back to top