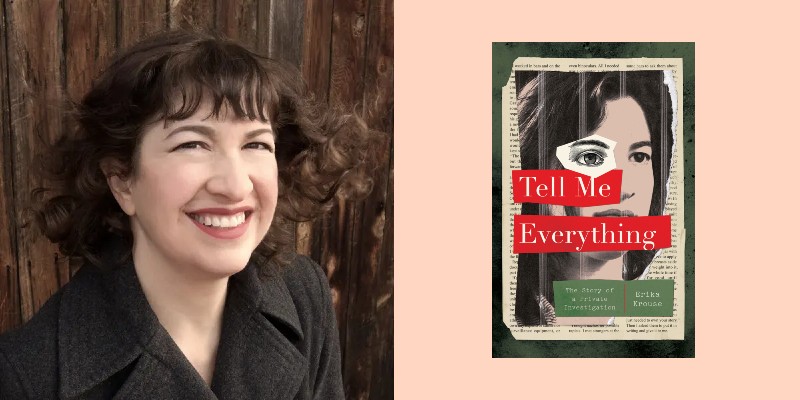 In Tell Me Everything, Erika Krouse becomes a private investigator and lands in a complex sexual assault case

As we settle in for our Zoom, I flip through the opening to Erika Krouse’s remarkable true crime memoir, Tell Me Everything. She wrote: “I became a private investigator because of my face. It’s an ordinary-looking face, but if I ask, ‘How are you?’ sometimes people start crying.” Her face is an invitation to tell her the worst things about yourself: she hears about messy divorces; terminal diseases; all sorts of traumas; and just plain confessions. “I was a storage locker for people’s secrets,” Krouse writes, and then shows the reader just how effective that ordinary face was in helping attorneys working on a very complex Title IX case at a Colorado university.

Here’s my confession. Many years ago, I reviewed Krouse’s 2001 short story collection, Come Up and See Me Sometime. I had thought about it periodically afterwards because I don’t usually like short stories, but I’d loved Krouse’s collection and my review was very positive. Fast forward 20ish years to Tell Me Everything landing in my mailbox. I remembered her and started reading immediately and I was hooked. I emailed Krouse—she remembered my review and another essay I published—and we made a date to talk once I had finished the book (which took around three days).

Tell Me Everything is not your typical true crime memoir. I can’t think of another nonfiction book where the protagonist is an actual PI. Also atypical is Krouse’s treatment of her own assault many years prior to this case, which rears its traumatic head while she is coaxing women to come forward and testify against popular athletes.

“One of the things that’s so effective about the book is that by page 11, we know what’s going to happen. You’re going to be working for this lawyer on this case and it’s going to be a transformative experience. I feel like it took you 11 pages to do with a lot what a lot of memoirists can’t do in 50,” I said.

Krouse laughed, “I worked pretty hard on those pages, so thanks,” she said. “This book actually came out of rejection letters. I always wanted to be in Granta and I submitted to them for 20 years in three different genres. They were like pie in the sky for me. One year the editor still said no, but she’d noticed something in my cover letter and contacted me. ‘You said that you were a private investigator. Can you write us a 3000-word piece on spec?’ she asked. And I wrote it. It was twice as long as the assignment.” She pauses, and I sense we are getting into more personal territory. This is a book about a huge, complex Title IX case which involved women coming forward after being assaulted by athletes the college wanted to keep and to keep happy. But it is also about Krouse reckoning with her own sexual assault and how it affected her and her family. It’s an unusual true crime book because there is no suspense, and the case is too complex to really follow. It’s also unusual because Krouse is so conscientious about protecting the victims and not particularly interested in the young male perpetrators.

I asked Krouse, “What do you think is the DNA of this book? What are the elements or who are the writers that you feel like you’ve internalized in order or to make this particular sausage?”

Krause said, “I feel I can only define it by what it’s not. It’s not straight true crime. All the mystery is gone. Even though I disguised everything, you could go online find out the outcome immediately. So there’s no question of what’s gonna happen. It’s not straight memoir either because I only take up a certain amount of space in there. And my story is really a subplot. It’s not the plot. I wish I had a better answer.”

“No,” I said. “I think that’s the most honest answer. Because you could recite a whole bunch of names and titles, but that’s the work. You do have to make up the structure yourself.”

“I think you invent it as you go,” Krouse said. “But I do think there are ways to write it all wrong, so it doesn’t fit how you feel or… your vision’s a strange word because I don’t really think I had quite a vision per se, but I did know when I was wrong. I think especially with a memoir, it has to fit something in your psyche—really, I think it has to fit many, many, many, many things in your psyche. You’re following a certain kind of psychological logic when you’re writing a memoir and it has to be a logic that the reader can also follow.”

“One of the things I really liked is that you set the book up so that we learn what a PI does along with you developing those skills,” I said. “It almost has a level of pedagogy to it, which is really interesting because we’ve all read a million novels about PIs, but the day-to-day work of a PI is not a novel.”

Krouse laughed. “I learned, but it’s also intuitive. What I find really fascinating is the way people manipulate each other in an interview. I don’t know if you’ve thought of that—”

“All the time,” I said. “All the time. I used to go into every interview feeling like I had to have a lot of false bravado in proportion to the pretentiousness of the person I was interviewing.” I told her about a difficult interview I did with a writer many years ago. ”He is one of a handful of New York writers that I interviewed in their apartments. And there’s definitely a type of writer who invites you to their apartment rather than meeting you at a cafe or something. It’s like they want to control the scene. They’re art directing the interview.” Krouse’s face had gotten me. I hadn’t planned on telling her—or telling anyone—about the particulars of that interview.

Krouse said, “See, my first thought is, ‘Oh my God, he had to clean his house.’”

I laughed. “His house was, I believe, professionally cleaned. I don’t see him with a toilet brush, you know?”

I agreed. “I need a level of clutter. I do. I can’t ever clean all the way up.” This discussion of actual clutter led to one about how complex the case was. It was one of the first Title IX cases, and though the settlement was in 2007 no one has written a book about the case. Krouse said, “I think it would be too hard for the reader to follow it without a lot of explanation. And that’s why people weren’t writing about this case. It was so hard to understand. I’ve read books about Title IX and I wouldn’t even find our case in there. I think it’s because it’s impossible to understand this case from a newspaper article. There are too many elements. There are too many strange things that fit together. And that’s why when I started writing about it I was thinking this is really is a book. It’s not an essay. It requires someone to organize it. Of course, the lawyers did that, but all they write are the legal briefs and who on earth wants to read those? Right?”

I said, “I think all that information synthesis is really interesting because there’s definitely a way to structure a memoir in which you would’ve been much more central. If we’re doing situation and story, you would be the situation and the case would be the story. Your book has a different feel to me—you’re present because your prose is really distinctive, but I didn’t feel you were overbearing or that your emotions were hijacking the case.”

“Right. It would’ve been dishonest for me to be like, oh, this case is a backdrop for my important life,” Krouse said.

“It hasn’t stopped a lot of people. We both know that,” I said. “But I think ideas are changing about the way that these cases should be portrayed. How do we tell these stories without revictimizing people?” I asked.

“That’s something that was a big concern for me. I was always worried about it. So I heavily disguised everyone to the utmost of my ability. Still, it was the thing that kept me on edge. And I’d have these nightmares that I just outed somebody who didn’t want to be recognized because at that time they were really under threat,” Krouse said. “I was afraid that if the wrong person read it and recognized somebody…but I was worried about revictimizing myself, too. It’s really difficult to revisit these tragedies, personal tragedies. It was hard for me to revisit my own.” Krouse paused, then said, “The word trigger is overused because anything can be a trigger. That’s why I was very careful not to graphically describe [the events in the case]. Even if you don’t have a history of sexual violence, just reading this could traumatize a reader. So I tried to keep it more clinical—here are the facts. The facts alone are hard enough. And I wanted the book to be safe for a survivor to read.” 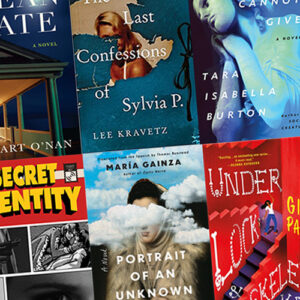