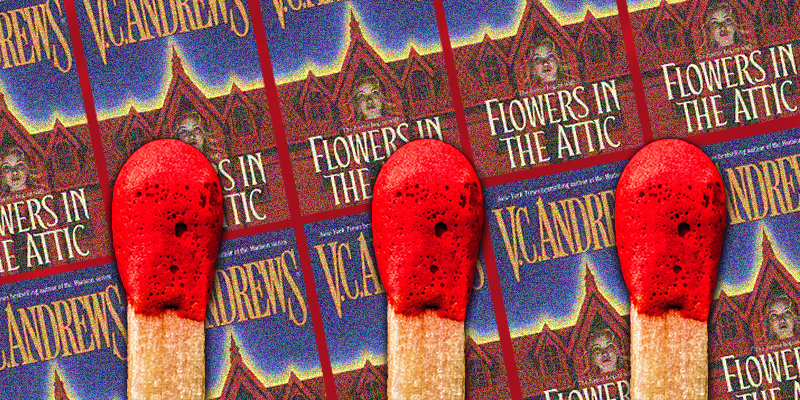 V.C. Andrews and the Battle Against School Censorship

Flowers in the Attic was banned from numerous districts for depictions of child abuse and incest. Everyone still read it.

There are many surprises to come for a newly published author, but one that surely seized Virginia’s attention was that almost immediately upon publication, Flowers in the Attic was banned from almost every high school library as well as adult ones, some bookstores, and especially by many parents who forbade their children— daughters in particular—to read the novel. 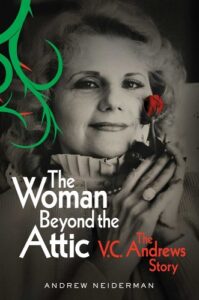 What had Virginia revealed in the young female characters she captured that so unnerved or challenged these people who wouldn’t open the cover of one of her novels? What were they afraid to read? A young girl like Cathy Dollanganger coming alive, feeling things she had never felt—what woke her at night, “pulsating, throbbing, excited,” knowing a man was there with her, doing something she wanted him to do?

Were Virginia’s revelations about a young girl’s sexual curiosity too much like their own, too much like their own fears and desires, perhaps even ones that flashed incestuous thoughts? Were these surreptitious readers afraid that someone watching them read Flowers in the Attic would see them blushing and ask them why? The protagonist was so young, the intimacy so adultlike.

Many blame the negative reactions simply on Virginia’s weaving incest into the story. Some were also turned off by what’s been called the Southern-fried religious fanaticism Olivia and Malcolm Foxworth practiced. Others point to the vivid depictions of child abuse. Likely, the combination of all these things was what offended many readers and especially parents who wanted to keep it from their teenagers and young daughters. Eleven- and twelve-year-olds who equated reading with taking castor oil were flocking to it.

Yes, the book is critical of fanatical religious beliefs, and it does vividly portray the torture and vicious punishment of innocent children, but I suspect discerning readers will tell us that there is more, much more, that is personal, making Virginia’s work alluring and forbidden simultaneously. Simply put, it was what reading Flowers in the Attic awakened in the reader and not just what it vividly displayed to the reader that made it so forbidden.

These are heavy themes for a novel that was supposed to be something of a fantasy, an escape read, that truly became one of the most successful literary experiences for an audience of adolescent girls as well as grown women. In mass-market paperback format, Flowers in the Attic at first looked like just another example of a diversion, entertainment, perhaps just another story to read on the beach. But with remarkable speed, the first readers spread the impact of their reading experience so quickly and enthusiastically that Virginia’s debut zoomed to the top of the bestseller list in two weeks. By September 1981, there were over 3 million copies in print. It probably didn’t need the heavy promotion Pocket Books and Simon & Schuster were giving it. Word of mouth, the most cherished sales goal for any publisher, was turning the novel into one of the fastest-selling books in publishing history.

Timing is everything. A novel that includes incest would certainly not be banned as widely today, but Virginia was clearly not driven by considerations of what was or wasn’t offensive. From all she wrote and said about it, we can see that she was determined to be true to her story and characters. In author-speak, she was not writing for any market. But she was not oblivious to what went on in the world around her. She was a voracious reader herself but less of contemporary fiction and more of the classics.

Around the time Flowers in the Attic and its first sequels were published, there was a great deal being written about child abuse. There were headlines in newspapers that rivaled any shocking premise Virginia could come up with. According to John Philip Jenkins, writing in Britannica (February 27, 2020), child abuse had become a serious social issue in the United States and other Western countries. There were claims of incest, abduction of children, and even the murder of children, as well as the operation of organized child-abuse rings. The information was gathered through social workers and psychotherapists who interviewed suspected child victims. Jenkins came to a fascinating conclusion that the increase in child-abuse reporting also resulted from “the controversial practice of some psychotherapists of attributing the problems reported by adult patients to repressed memories of sexual abuse suffered during childhood.”

In Winter’s Faces of Fear, Virginia admitted, “It was an odd sort of coincidence that I would start writing about child abuse right when it became very popular to write about it.

“There are so many cries out there in the night, so much protective secrecy in families; and so many skeletons in the closets that no one wants to think about, much less discuss. I tap that great unknown. I think my books have helped open a few doors that were not only locked, but concealed behind cobwebs.”

Tackling sensitive topics is always a difficult decision for a writer. Will the controversy cause the publisher to reject the work? For years, Hollywood avoided stories that put incest on the screen, but Simon & Schuster did not hesitate to publish Virginia’s work. It is true that incest has always been easier to digest in print than on the big screen, but despite its shocking incidents, the general public and most reviewers did not consider Flowers in the Attic gratuitous.

More important, Virginia did not shy away from her premise even though she was well aware of how such a story point would resonate with her family, her mother in particular. She expressed the opinion often that Cathy and Christopher Jr. weren’t to be blamed as much as their mother, who had cooperated in and later reinforced the situation that nourished the incestuous event.

In Rubin’s 1981 “Blooms of Darkness” interview in the Washington Post, Virginia accented this opinion, saying, “I don’t see why people find the incest so shocking. I felt it would have happened naturally. It’s the mother who is shocking. It’s her fault they’re in the attic in the first place.”

Whatever conclusion you reach, there is the adage, “If you want to sell something, ban it.” The forbidden is often the most desirable, not that this was the complete reason for the success of Flowers in the Attic. Nevertheless, it was undeniably part of the appeal for many. And yet, from what the surviving members of the Andrews family recall, it’s extremely doubtful the word “incest” was ever even uttered in the Andrews home before the publication of Flowers in the Attic, save perhaps in allusion to a biblical passage in which the act was referenced (e.g., Leviticus 18:10). Readers might be surprised to know that Virginia’s mother was the only other immediate family member in her household during the book’s writing and publication. According to Virginia herself, when her mother heard what topics her daughter had

written about, she avoided reading anything by her in the future.

Virginia wrote to her brother Eugene and his wife, Mary, about this during the early stages of the publication of Flowers: “Mother has not yet read my book. I doubt she ever will. Her attention span is very, very short—and she gets sleepy. I feel, however, if she can manage to read it, she will be shocked—and shocked more when she reads my other two books.”

And yet, when success came and the public demand to see—and even touch—her daughter was wrong, Lillian Andrews would be at her daughter’s side willingly. Family members witnessing it would describe those protective eyes scouring the adoring fans for anything she thought inappropriate. Lillian would reveal to her daughter-in-law Mary that she was wondering what the readers’ mothers were like.

Did they know their children were carrying Flowers in the Attic in the manner in which they should be carrying the Bible? What were they so in love with? Why were they so fascinated? What had the world come to? And how did her daughter do this? These were questions in family discussions, even occasionally voiced in Virginia’s presence.

As they say, the rest is history—although it is a continuing history, with the Dollanganger series still selling domestically and worldwide.

Share:
Flowers in the AtticSchool CensorshipThe Woman Beyond the Attic

Andrew Neiderman is the author of numerous novels of suspense and terror, including Deficiency, The Baby Squad, Under Abduction, Dead Time, Curse, In Double Jeopardy, The Dark, Surrogate Child, and The Devil's Advocate--which was made into a major motion picture starring Al Pacino, Keanu Reeves, and Charlize Theron. He lives in Palm Springs, California, with his wife, Diane. Visit his website at Neiderman.com.
http://Neiderman.com 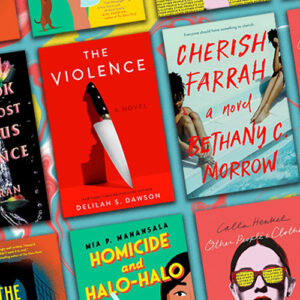