Crime and the City visits the rain-soaked mean streets of Vancouver for a look at the latest in Canadian crime writing.

We’ve covered Montreal and Toronto before in Crime and the City, so time to head west. All the way west to ‘Terminal City’—Vancouver, British Columbia, the third largest city in Canada and perhaps its most diverse and multi-cultural today. But Canada’s ‘City of Glass’ is also the country’s most expensive city to live in and now feels mighty familiar due to the number of TV shows up there in (surely room for one more nickname!) “Hollywood North”. There’s some crime and vice too….

Modern Vancouver may not seem too obviously noir, but John Belshaw and Diane Purvey’s Vancouver Noir: 1930-1960 (2011) shows quite clearly that there is an older Vancouver that was plenty dark. This is Vancouver as old school industrial city where gambling, smuggling, grifting, police corruption, bootlegging, prostitution, and murder flourished. The inclusion of a lot of great newspaper and police photographs bring back to life on Granville Street’s neon alley, the old burlesques, the crowds at Happyland and the Penthouse Cabaret on Seymour Street.

But back to Sam Wiebe for a moment who, as well as the editor of Vancouver Noir, is the author of the Vancouver-set Wakeland novels. In Invisible Dead (2017) PI Dave Wakeland is hired by a terminally ill woman to discover the whereabouts of her adopted child, who disappeared as an adult more than a decade earlier. It’s a search that takes him deep into Vancouver’s underworld. In Cut You Down (2018) Wakeland is hired to find a missing woman and finds himself immersed in Vancouver’s world of suburban gangsters, corrupt authorities, and a contract killers. As well as the Wakeland series Wiebe’s stand-alone novels include The Last of the Independents (2012), which won an Arthur Ellis Award in 2012. A crooked detective is playing the justice system to protect a kidnapper, and the only viable lead takes PI Michael Drayton to a car-thieving junkie. Finally, in Never Going Back (2020), we meet Alison Kidd, Vancouver’s top thief, fresh out of jail and determined not to go back. Of course, ‘one last job’ beckons.

Marc Strange was an Ottowa-born author, actor, and TV producer, best known in Canada for having co-created the long running CBC TV show The Beachcombers, which ran for nearly twenty years. He also created a series of Edgar award winning novels featuring ex-boxer Joe Grundy who works for millionaire Lord Douglas Hotel owner Leo Alexander. In Sucker Punch (2007) Grundy hunts a murderer through Vancouver’s streets. And then, in Body Blows (2009), the live-in servant and not-so-secret lover of Grundys boss turns up murdered and the case seems to relate back to the past.

A winner in the series longevity stakes Laurence Gough’s Willows and Parker novels are set largely in Vancouver. Book one in the series, The Goldfish Bowl (2016) is set in the city’s West End with a rogue sniper. Jack Willows and his new partner, Claire Parker are assigned the job of stopping the shooter. There are now a whopping thirteen books in the Willows and Parker series. Over the course of the books the Vancouver detectives move slowly on their relationship while the killers they hunt get more and more intense.

A couple of true crime books well worth mentioning that both happen to be by Vancouver’s Queen of Real Crime, Eva Lazarus. Blood, Sweat, and Fear (2018)) is the story of Inspector Vance, Vancouver’s first forensic investigator and the man known as Canada’s Sherlock Holmes and headed up what was Canada’s first police department to seriously use forensics. Each chapter follows the police investigation into individual crimes including the Japantown “Murder Factory,” the murder of two police officers at False Creek Flats, and the cause behind the mysterious death of a 19-year-old man. Lazarus is also the author of Murder by Milkshake: An Astonishing True Story of Adultery, Arsenic, and a Charismatic Killer (2019) is the story of forty-year-old Esther Castellani who died of undetermined, but gruesome, causes in Vancouver in 1965. The day after Esther’s funeral, her husband, Rene, packed up his girlfriend, Lolly; his daughter, Jeannine; and Lolly’s son, Don, and took off for Disneyland. Eventually Rene was charged with capital murder for poisoning his wife with arsenic-laced milkshakes in one of British Columbia’s most sensational criminal cases of the century.

And finally, Ashley Little’s Anatomy of a Girl Gang (2014), a book that won the Ethel Wilson Fiction Prize in British Columbia. It’s a dark and gritty novel told in multiple and distinct voices telling the story of a gang of teenage girls in Vancouver called the Black Roses. Mac, the self-appointed leader and mastermind; Mercy, the Punjabi princess with a skill for theft; Kayos, a high-school dropout who gave birth to a daughter at age thirteen; Sly Girl, who fled her First Nations reserve for a better life, only to find depravity and addiction; and Z, a sixteen-year-old graffiti artist. Anatomy of a Girl Gang is a powerful tale that reveals the tougher city that lies beneath the outwardly glistening and wealthy City of Glass. 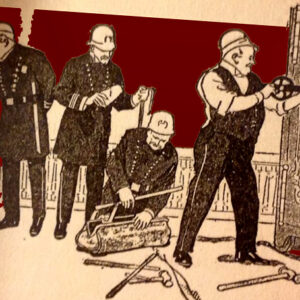 There’s something alluring about safecrackers. The image of a black-clothed figure sneaking stealthily into a dark bank...
© LitHub
Back to top