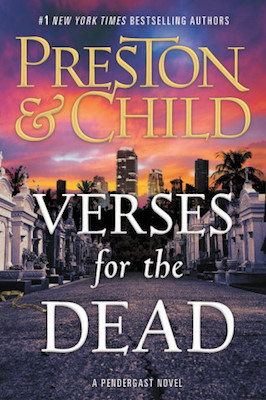 The following is an exclusive excerpt from Verses for the Dead, the latest work by dynamic duo Douglass Preston and Lincoln Child. In their latest to feature Agent Pendergast, the lone wolf investigator must confronted the unexpected challenge of having to work with a partner.

Pickett looked up at the clock: 1:00 pm exactly. As if on cue, the sauna door opened and a man stepped in. He glanced over with practiced casualness and had to restrain himself from doing a double take. Instead of being stripped and wearing a towel around his waist, the man wore a black suit, impeccably tailored and buttoned, along with a starched white shirt sporting a perfectly dimpled knot at the collar. His shoes were polished to a brilliant shine and were of the expensive, handmade sort. Of all the thoughts that could have wandered into Pickett’s temporarily stunned mind, the foremost was: Did he actually walk through the locker room, showers, and pool dressed like that? He could only imagine the fuss it must have caused as the agent broke all the rules on his way to the sauna.

The other man in the sauna, sitting near the door, looked up, frowned in brief surprise, and glanced down again.

Pickett recovered immediately. He knew this agent had a reputation for being epically eccentric. That was why he’d chosen not only to change up the man’s duty orders, but this location to discuss them. In his experience, atypical situations—such as meeting naked in a sauna—helped throw challenging subjects off balance, giving him the upper hand.

Before speaking, he picked up the wooden dipper from the water barrel, filled it, then poured it over the sauna stones. A satisfyingly thick gush of steam wafted through the room.

“Agent Pendergast,” he said in a level voice. The man in black nodded. “Sir.”

“There are several banks of lockers beyond the showers. Would you care to change out of your clothes?”

“That won’t be necessary. The heat agrees with me.” Pickett looked the man up and down. “Take a seat, then.” Agent Pendergast plucked a towel from a pile near the door, walked over, wiped the bench next to Pickett free of moisture, then folded it neatly and sat down.

In his experience, atypical situations—such as meeting naked in a sauna—helped throw challenging subjects off balance, giving him the upper hand.

Pickett was careful not to show any surprise. “First,” he said, “I want you to accept my condolences on the death of Howard Longstreet. He was a superb intelligence director, and I understand something of a mentor to you.”

“He was the finest man I ever knew, save one.”

This was not the reply Pickett had expected, but he nodded and stuck to his agenda. “I’ve been meaning to speak with you for some time. I hope you won’t mind my being blunt.”

“On the contrary. Unlike knives, blunt conversations make for the quickest work.”

Pickett looked at Pendergast’s face for any hint of insubordination, but the agent’s expression was utterly neutral. He went on. “I’m sure it won’t  surprise you to learn that, in my few months as head of the New York Field Office, I’ve heard a lot about you—both official and unofficial. To put it frankly, you have a reputation of being a lone wolf—but one who enjoys an exceptionally high percentage of successful cases.”

Pendergast accepted this compliment with a little nod, such as one might make to a partner at the beginning of a waltz. All his movements, like his speech, were measured and catlike, as if he were stalking prey.

Now Pickett delivered the backhand of the compliment. “You also have one of the highest rates of suspects not going to trial because, in the FBI vernacular, they were deceased during the course of investigation.”

“Executive Associate Director Longstreet was not only your mentor. He was also your guardian angel in the Bureau. From what I understand, he seems to have kept the inquiry boards off you; defended your more unorthodox actions; shielded you from blowback. But now that Longstreet is gone, the top brass is in something of a quandary—when it comes to dealing with you, I mean.”

By now, Pickett had expected to see a degree of concern flickering in the agent’s eyes. There was none. He reached for the dipper, poured more water on the stones. The temperature in the sauna rose to a toasty 180 degrees.

Pendergast straightened his tie, refolded one leg over the other. He did not even appear to be sweating.

“What we’ve decided to do, in short, is give you rein to continue with what you do best: pursue psychologically unorthodox killers, using the methods that have brought you success. With a few caveats, naturally.”

“Which brings us to your next assignment. Just this morning, a human heart was found left on a grave in Miami Beach. The grave belonged to one Elise Baxter, who strangled herself with a bedsheet in Katahdin, Maine, eleven years ago. On the grave—”

“Why was Ms. Baxter buried in Florida?” Pendergast interrupted smoothly.

Pickett paused. He did not like to be interrupted. “She lived in Miami. She was in Maine on vacation. Her family had her body flown home to be interred.” He paused to make sure there were no other interjections, then he picked up the sheet of plastic-enclosed paper. “On the grave was a note. It read—” he consulted the paper— “ ‘Dear Elise, I am so sorry for what happened to you. The thought of how you must have suffered has haunted me for years. I hope you will accept this gift with my sincere condolences. So let us go then, you and I—others are awaiting gifts as well.’ It was signed, ‘Mister Brokenhearts.’ ”

Just this morning, a human heart was found left on a grave in Miami Beach.

Pickett paused to let this sink in.

“Very obliging of Mister Brokenhearts,” Pendergast said after a moment, “although the gift does seem in rather poor taste.”

Pickett frowned through the sweat gathering around his eyes, but he still caught not the slightest whiff of insubordination. The man sat there, cool as a cucumber despite the heat.

“The heart was found by a cemetery visitor at around seven forty-five this morning. At ten thirty, the body of a woman was discovered beneath some shrubbery on the Miami Beach Boardwalk, about ten miles to the south. Her heart had been cut out. Miami Beach PD is still working the scene, but we already know one thing: the victim’s heart was the one found on the grave.”

Now, for the first time, Pickett saw something flash in Pendergast’s eyes—a gleam, like a diamond being turned toward the light.

“We don’t know the connection between Elise Baxter and the woman killed today. But it seems evident there must be one. And if this mention of ‘others’ in the note can be trusted, more killings might be in the offing. Elise Baxter died in Maine, so even though it was a suicide, interstate jurisdiction means we’re involved.” He put the piece of paper down on the bench and slid it toward Pendergast. “You’re heading for Miami to investigate this murder, first thing tomorrow morning.”

The gleam remained in Pendergast’s eyes. “Excellent. Most excellent.”

Pickett’s fingers tightened on the sheet as Pendergast reached for it. “There’s just one thing. You’ll be working with a partner.” 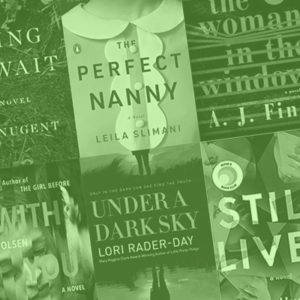 The Best Psychological Thrillers of 2018 It was a banner year for psychological thrillers, with Trump-induced anxieties and #metoo stories entering into prominence...
© LitHub
Back to top