Vice and Virtue
in the Newgate Novel

The crux of Claire Harman’s new book, Murder by the Book: The Crime that Shocked Dickens’s London, is that life imitates art. In the dead of night on May 5, 1840, someone slit the throat of Lord William Russell. Suspicions quickly narrowed on Lord William’s valet, Francois Courvoisier, who, it was argued, had been inflamed by reading the sensational crime fiction so popular at the time. In one of his several confessions, Courvoisier revealed himself as a copycat killer, reporting that “the idea [for the murder] was first suggested to him by reading and seeing the performance of Jack Sheppard.”

The novel, written by William Harrison Ainsworth, an author more well-known at the time than his friend Charles Dickens, whom he “helped to ‘groom’ for literary success,” according to the British Library, was trending at that historical moment. After running as a serial in Bentley’s Miscellany in 1839, it was widely reprinted in pirated editions and adapted into quick plays. The supposedly murder-inspiring plot pulled its hero from history, chronicling the life of a legendary pickpocket and jailbreaker named Jack Sheppard.

The origin of Sheppard’s story can be found in the ultimate 18th century true crime read, The Newgate Calendar; or, Malefactors’ Bloody Register, which collected the most notorious tales of those confined to Newgate prison and subsequently hanged at Tyburn. It is a volume full of “violent, intriguing and thoroughly addictive true-life cases,” writes Harman. With its illustrated depictions of grisly crimes, The Newgate Calendar was first published in book form in 1773, followed by several other versions, some using the ‘Newgate’ moniker, some not. Prior to that, Londoners would have read the news via ephemeral broadsides. The solid, five-volume book, however, became a useful tool for enforcing the contemporary social ideas about vice and virtue. New editions appeared well into the nineteenth century, some with illustrations by Hablot Knight Browne (aka “Phiz,” Dickens’s favorite illustrator).

Needless to say, The Newgate Calendar was popular with a citizenry that turned a public execution into the equivalent of the Superbowl. At the same time, literacy was increasing among the working class, and cheaper printing methods had helped to create a mass readership. Canny novelists took note of this new market and its interests, sparking an alluring but short-lived genre now referred to as “Newgate novels.” These were stories set in the underworld and based, however loosely, on convicts with lurid or melodramatic biographies. “The titles that went down spectacularly well with this new mass audience were, predictably, the most sensational ones,” writes Harman.

“So obtrusive in life, the theme of Newgate and the gallows could not fail to show itself in all the popular arts,” writes Keith Hollingsworth in his 1963 book, The Newgate Novel, which essentially defined the term for English majors everywhere. Only “eight or nine” novels, he believes, truly lived up to the classification. And it all began with Edward Bulwer-Lytton’s fifth and sixth novels, Paul Clifford (1830) and Eugene Aram (1832). Paul Clifford is the novel that famously opens, “It was a dark and stormy night….” The plot follows an orphaned boy who finds encouragement in the lore surrounding highwayman Dick Turpin and turns to robbery as his life’s work until he falls in love. Bulwer-Lytton was known for his heavy-handedness; even as a departure from his previous work, though, this novel still concludes with a moral about corruption, injustice, and redemption. Eugene Aram was less reform-minded, focusing on another real-life Newgate alum, a genteel scholar turned killer.

Ainsworth’s earlier gothic romance, Rookwood (1834), also took up the story of Dick Turpin, but with more dashing horsemanship and, we’re guessing, a little smolder. “Turpin was the hero of my boyhood,” writes Ainsworth. The novel was adored by the public, and yet it became harder for some readers to square the notion of a character as both a rogue and a hero—Turpin, after all, had been executed for theft in 1739.

[Newgate novels] were stories set in the underworld and based, however loosely, on convicts with lurid or melodramatic biographies.

Oliver Twist, published as a serial from 1837-39, is next on Hollingsworth’s list, although the author, Charles Dickens, would be quick to disagree. “Dickens was disgusted that Oliver Twist became caught up in the [Newgate novel] controversy,” writes Professor Philip Horne. But the novel is filled with street slang and seedy characters that command our respect if not our consent, e.g., Fagin and the Artful Dodger. Plus, the Newgate Calendar is referenced twice in the novel, “the pages … soiled and thumbed with use.” It’s also worth noting that Dickens attended the execution of Courvoisier, as did William Makepeace Thackeray. (There’s an excellent description of this in Harman’s book.)

Perhaps what really got Dickens’s knickers in a twist was the fact that the publication of Ainsworth’s Jack Sheppard overlapped with the last four installments of Oliver? He could be a prig like that. Jack really took off, too, with Hollingsworth calling it “more popular than Oliver Twist, and the high point of the Newgate novel as entertainment”—that is, until the slaying of Lord William Russell prompted some conflicted feelings among readers.

The aforementioned Thackeray got in on the Newgate action, even as he protested against the sordidness of it all and published an essay against the spectacle of public hangings. He believed his Catherine (1840), which fictionalized the story of Catherine Hayes, who killed her husband but was convicted of petty treason, was beneficial in that it showed these villains for what they were, and will “cause the public to hate them.” Hayes was burned at the stake in 1726, and yes, her tale of woe is spread over five pages in the Newgate Calendar.

The other novels included by Hollingsworth in the Newgate genre are Dickens’s Barnaby Rudge (1841), set largely at Newgate, and Bulwer-Lytton’s Lucretia, or the Children of the Night (1846), based on the story of a living felon, the artist Thomas Griffins Wainewright. Thackeray’s Vanity Fair (1848), which has its dark moments and speaks to the contemporary literary squabble over how to portray immoral characters, mostly escapes the Newgate niche.

Spurred by Thackeray, who penned many screeds on the subject, critics turned against the idea of glamorizing lawbreakers in fiction, believing that the Newgate novels (as well as their penny knockoffs and theater adaptations) were promoting delinquency among the newly literate lower classes. For what it’s worth, Hollingsworth doesn’t believe that Jack Sheppard was capable of inciting anyone to bloodshed, as many had come to believe in the wake of Courvoisier’s revelation about his reading material. Still, he concludes, it’s nice to imagine that literature has that kind of power. 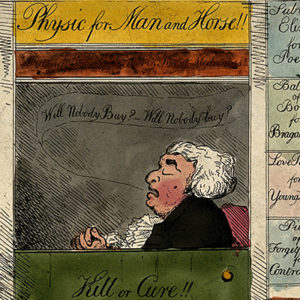 A man sets up a box amidst a busy market, jumps on top of it cradling a boxful of tiny glass vials, and begins his chant....
© LitHub
Back to top