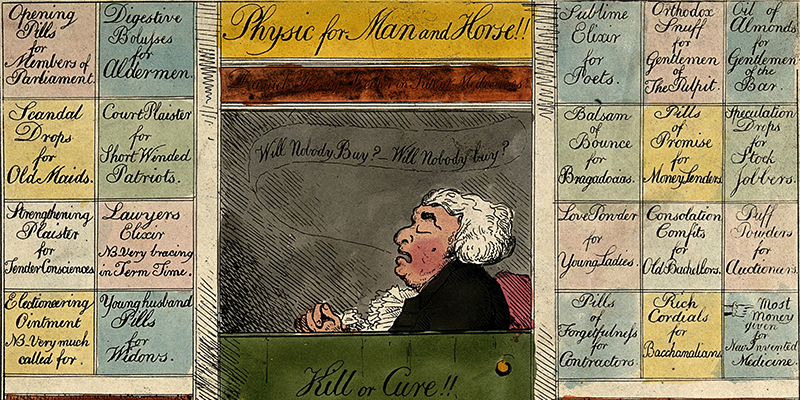 A Brief Survey of Victorian "Cures"

A man sets up a box amidst a busy market, jumps on top of it cradling a boxful of tiny glass vials, and begins his chant. His new miraculous tonic can heal gout, weakness, hangover, venereal ailments, bellyache, baldness, liver disease, monthly discomforts, both drowsiness and insomnia, and of course, whichever malady the gathering crowd enquires after. Pretty much like Brexit (ups, did I say that out loud??).

The job was rather easy. And lucrative. Fill your vials with anything that gives off a funny chemical smell (and I mean anything: formaldehyde, methanol, diluted sulphuric acid…), give it a Dickensian name and a flashy label, and off you go. Some of those “cure-alls” have been analyzed in more recent times and turned out to be nothing but strong laxatives, sometimes with a touch of opium. You’d definitely notice a rapid change in your body!

Though it can be a bit of a joke now, the desperate search for cures was perfectly understandable.

Though it can be a bit of a joke now, the desperate search for cures was perfectly understandable. The vast majority of people could not afford proper treatments or medical care. You could really die of a cold or a bad bout of diarrhea, and the best analgesic available to all classes was gin—and not the nice varieties so in vogue right now; I mean nasty, poorly distilled concoctions from someone’s bathtub, infused with juniper to disguise the foul taste a little.

On the other hand, even if you could afford the crippling fees of a trained doctor, you might not be much better off. Most medicines contained laudanum, opiates, arsenic or mercury (the latter deemed most effective for syphilis). Merck’s first Manual of the Materia Medica (and yes, I am speaking of the chemicals manufacturer that still supplied me during my PhD) recommended sulphur fumes for asthma, electric discharges for anaemia, arsenic for constipation and bloodletting for nausea and earaches—leeches, in fact, were still advised. This was 1899!

Advertisement was not regulated, so the early pharmaceutical companies could make whichever claim they wished on their products, no matter how ludicrous of how bold their lies were (pretty much like presidential elections). Women were also bombarded with advertisements telling them they were weaker and more prone to disease and hysterics, and inviting them to use liberally their smelling salts and their laudanum and their opiate pills. No wonder ladies fainted all the time…

I must say, not all was doom and gloom. Serious medical advances were made during this period. Chloroform, for instance, became available. Queen Victoria initially condemned it (like she did most things), but Her Maj dramatically changed her mind after chloroform was administered to her when she gave birth to Prince Leopold. One is not so tough after all…

Speaking of which, mental illness was also properly studied for the first time in the nineteenth century, Edinburgh being one of the trend-setters in the field. Also, for the first time, the actual purpose of the research was to help people get better. Before then madness was mostly regarded as akin to wickedness, linked to a bad lineage and even demonic possessions. Less severe but still painful mental ailments, like depression or anxiety, were simply branded as hysterics and, as mentioned above, treated only with opiates if you could afford them (if not, again, gin).

I find Victorian times particularly interesting because you had all these new scientific discoveries intermingling with mock science and also the ancient folklore and superstition. Spiritualists and mediums were popular and were summoned not only to commune with the dead, but also to cast out evil spirits and diseases. Sir Arthur Conan Doyle is perhaps the most famous Victorian patron of such services, and best example of an era when rationality winked shamelessly at the paranormal.

And while that was going on in the towns and cities, people in the country still relied heavily on herbal and ritual remedies from yore.

Some home remedies did work, like willow juice, which is in fact a precursor to aspirin (salicylic acid, named after the salix genus), or witches’ potions prepared with moldy bread, which of course were unintended courses of penicillin. Others, however, were downright preposterous. Touching a hanged man’s hand was believed to cure tumors, and snail juice (quite literally, juice squeezed from a snail) was used for eye drops.

For Loch of the Dead (yes, I will be talking about my book…) I found a fascinating plethora of myths and legends surrounding the lesser known Loch Maree, including alleged cures for madness. In one of the loch’s many islands (Isle Maree, which has been a burial ground for thousands of years) there used to be a little well whose waters were supposed to heal all the troubles of the mind. Queen Victoria herself visited the loch in 1877—slightly unhinged throughout her life, we can’t discard she was looking for a remedy herself. John Whittier even penned a little poem for the occasion:—

And whoso bathes therein his brow

with care or madness burning,

feels once again his healthful thought

and sense of peace returning.

Another ritualistic cure associated with Loch Maree involved bull’s blood, but if you want to know more about it, you will either have to Goggle it or—far more enjoyable—read my book!

Oscar de Muriel was born in Mexico City in 1983 and moved to the UK to complete his PhD. He is a chemist, translator and violinist who now lives and works in Manchester. he is the author The Loch of the Dead, A Mask of Shadows, A Fever of the Blood and The Strings of Murder.
http://www.oscardemuriel.com/

Vice and Virtue
in the Newgate Novel 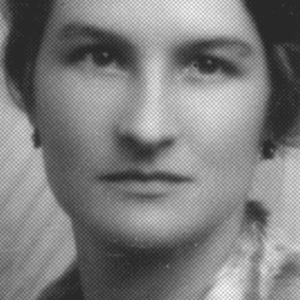 Virginia Hall was one of WWII’s most highly decorated spies and yet you’ve probably never heard of her (or her wooden...
© LitHub
Back to top