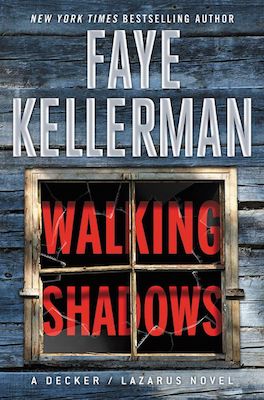 The following is an exclusive excerpt from Walking Shadows, by Faye Kellerman, and the latest in her bestselling Decker/Lazarus series. In the following passage, a lazy day marked by elderly protestors and mediocre sandwiches heats up when a body is found.

It was a mob, but not yet a full-fledged riot. Over a dozen retirees, dressed in housecoats and robes, had taken to the streets, demanding action at eight in the morning. The call had come through twenty minutes earlier, just as Decker was knotting his blue tie, putting the finishing touches on his typical uniform: a dark suit over a white shirt. He skipped checking in at the station house, going immediately to the crime scene—seven smashed mailboxes, metal poles uprooted, letters and mailers strewn into the street.

“Less than that,” Annie Morr is chimed in. She was in her seventies and wore a terry cloth robe over floral pajamas. “Third time in two months. Not a good way to start the summer.”

Janice Darwin tightened her own coral robe and added, “I didn’t give up my life in the city just to find crime here, you know.”

He skipped checking in at the station house, going immediately to the crime scene—seven smashed mailboxes, metal poles uprooted, letters and mailers strewn into the street.

Decker wasn’t sure what city she was from. Not that it mattered. He smoothed his mustache—silver with hints to its once red color. It matched the hair on his head. “I know you’re frustrated—”

Grumbling from the masses.

Decker looked at the old man—stoop shouldered with angry eyes. He and Floyd were around the same age. Decker had the advantage of a strong back and broad shoulders, although he suspected that gravity had shoved his spine down an inch or so. Still, he had plenty to spare, always the tallest kid in the crowd. People always asked if he had played basketball.

Nope. Too much weight and too slow.

He said, “Anyone hear anything last night? This much damage must have made noise.”

No response. That was expected since half of them wore hearing aids that they took out at night. Decker’s eyes drifted upward to the roofline, then back at Floyd. “What happened to the CCTV camera that we installed on your property?”

Krasner bit his lip. “I took it down.”

A pause. “It was interfering with my gutter.”

“Floyd, I installed that myself. It was nowhere near your gutter. I made sure of that.”

The man looked down. “The missus didn’t like it. She said it made the place look like a fortress.” His eyes flashed. “Who cares? You know who these punks are anyway.”

“Probably, but without evidence, I can’t arrest them, right?” Decker shook his head. “That camera cost over two hundred dollars. What did you do with it?”

“Could you get it for me?” Decker turned to Anne who lived next door to Floyd. “Do you mind if I install it on your roof?”

“Be my guest. You could have asked me in the beginning.”

“Floyd volunteered. I didn’t know he took it down.”

“It was interfering with the gutters,” Floyd said again.

“No, it wasn’t.” Decker looked at the sea of faces. “Everyone, go home. I’ll take pictures of the mess and we’ll get someone out here to reinstall the mailboxes.”

Karl Berry spoke up. “Wouldn’t it be easier just to get us all PO boxes?”

Janice said, “I don’t want a PO box. I like having a mailbox.”

Decker said, “Karl, you’ll have to take that up with the city council. I just do crime.”

“And not very well,” Floyd said.

“That was uncalled for,” Annie said. “If you hadn’t taken off the camera, we might have caught them in the act.”

Floyd muttered under his breath. Then he said, “I’ll get the damn camera.”

Decker said, “Go home, people. I’ll start at the end of the block and work my way up.”

As people slowly started filing back into their houses, Decker walked down the street. Greenbury was a rural eastern upstate town, but some places were more rural than others. This particular road—Canterbury Lane—backed up into woodlands, now green and leafy with the advent of summer. The days were longer, the sun was brighter, the sky was brilliant, and despite the uprising, Decker was in a good mood.

The warmer nights also brought out the local teenaged punks. They loitered in the streets, smoked weed in the back alleys, and when they really wanted privacy, they met up in the forest to get high, have sex, and do whatever crazy rituals underdeveloped frontal lobes do. Decker figured the kids entered the street through the woodlands, full of meth and Satan, and decided to vandalize for fun.

The last house on the block—surrounded by the wilds on two sides—belonged to Jeb Farris—a retired money manager who usually summered in Greenbury. He had yet to arrive, so Decker didn’t have his permission to tromp around the yard, but he figured Jeb wouldn’t mind. He was looking for evidence of teenage delinquency—cellophane wrappers with white powder, pills, ashes from crack pipes, marijuana butts. He didn’t find that, but what he did find took him aback.

He was looking for evidence of teenage delinquency—cellophane wrappers with white powder, pills, ashes from crack pipes, marijuana butts. He didn’t find that, but what he did find took him aback.

It took Decker a few moments to regroup his thoughts. Then he took out his phone. The first call was to McAdams, who said, “How’s the walker brigade doing?”

“Harvard, I just found a body.”

“At the mouth of the forest where Greenbury bleeds into Hamilton. The north side of Jeb Farris’s place. I need two uniforms with tape to cordon off the area, the Scientific Investigative Division, and a coroner. His head was bashed in on the right side and next to him there’s a bloody bat.”

“Early to midtwenties. A male with facial hair although not much of it. Send out Kevin Butterfield if he’s available. He can direct the procedure.”

“Any ideas who the victim is?”

“No. He’s lying on his side, face partially hidden, and I’m not touching him until the coroner gets here. Call up Hamilton. They should have someone qualified in their ME’s office. Are you writing this down?”

“After you get the cops, Kevin, and the SID guys, I need you to round up the following dickheads: Riley Summers, Noah Grand, Chris Gingold, Erik Menetti, and Dash Harden. I want to know where each and every one of them was last night and what they were doing.”

“Don’t those guys live in Hamilton?”

“The body is in Greenbury.” Decker thought a moment. “I’ll run it by Radar. Let him handle Hamilton PD. But we need to talk to them.”

“How are you settling in? Everything okay?”

“I’d prefer to stay with Rina and you.”

“Still not happening. But you can have dinner with us tonight. . . if we’re done by then. And even if we’re not, Rina can make us sandwiches.”

“Okay. It sounds better than what I had in mind.”

“Canned tuna served on a bed of self-pity.”

From the book, Walking Shadows: A Decker/Lazarus Novel. Copyright ©2018 by Faye Kellerman.  Reprinted with permission of William Morrow, an imprint of HarperCollins Publishers.

How a Renegade Historian Unmasked an Imposter 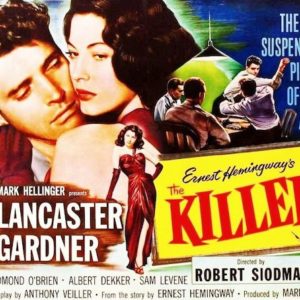 CrimeReads Brief: Week of September 2, 2018 Tori Telfer looks at the bizarre world of serial killer-themed merch on Etsy, where you can find "more Ted Bundy...
© LitHub
Back to top