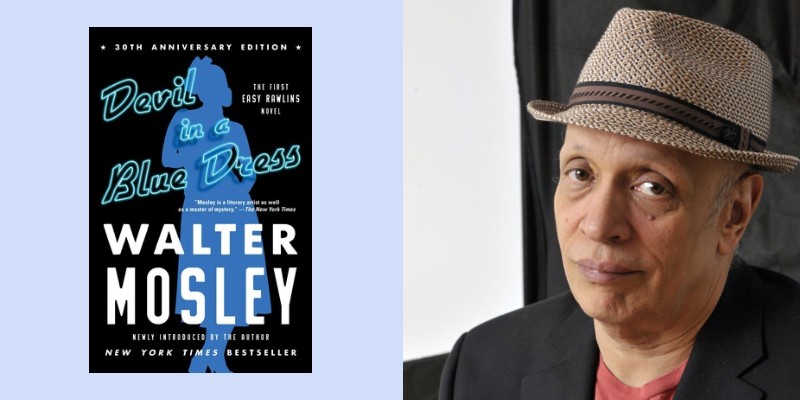 "He has been stopped by a thousand disrespectful policemen and he has brought to light the truths that America, from white nationalists to the Ivy League, has tried its best to hide."

Thirty years. That’s a very long time. Very long indeed. The publication date of Devil in a Blue Dress was in June 1990. America was still (and is still) struggling with its own history, its own unconscious awareness of race and who’s winning that contest. Race in the United States of America is, to say the least, the long haul. We’ve been running for centuries, all of us have—the made-up colors, black and white, brown, red, and yellow, along with a multitude of sects and faiths, language groups and economic systems. Men and women have entered the eternal tournament rushing to get ahead, to keep up, or to escape the consequences of being black and poor, being white and poor, or simply being the underdog in a system, a nation, a worldwide pandemic of underdogism.

When I wrote Devil I had a simple thought in mind. I wanted to tell a story about Los Angeles that highlighted black life and the black contribution to culture within a mirror-darkly that partially reflected the American experience within a shadowy landscape of national shame. In that book I talked about how poor black people migrated from the Deep South to Southern California, of how they flourished and ultimately failed; only to rise again, flourish again, fail again but in the end, pressing the envelope of that contest forward each and every time.

Sometimes within failure is contained magnificence. The characters introduced by the Easy Rawlins series hopefully displayed glimmers of hope and resistance. The murderous Raymond “Mouse” Alexander, for instance, drew a line in the concrete demanding respect or death. Then there’s the cowardly but brilliant Jackson Blue whose entire life is a blueprint of how genius can defy expectation. Business-minded Mofass was intent on capturing the wealth so often milked out of the black community. And ever-steady EttaMae Harris made sure that survival was the watchword of those she loved.

Easy encountered dozens of major and minor characters representing so many aspects and characteristics of black and other nonwhite lives that the rest of America seems, pretty much, unaware of.

The private detective Easy Rawlins is the center of this concatenation of the mystery/crime stories that started with Devil. He was born poor in 1920 Louisiana and orphaned by the time he was eight. A black child of Southern Louisiana, he jumped a boxcar that took him to 5th Ward, Houston, Texas. He is self-educated in everything from sewing to English literature. Easy is a heroic veteran of World War II and an undeniable victim of American racism; but he’s not the type to give up or to even back down. Easy is ready to stand his ground. Knowing him will certainly challenge his clients’ beliefs and maybe even cause them to double-check the locks on their door at night. He will definitely solve the case but will not always save lives.

Over the years Easy has experienced Joe McCarthy, the Beats, the Panthers, and the Summer of Love. He has been stopped by a thousand disrespectful policemen and he has brought to light the truths that America, from white nationalists to the Ivy League, has tried its best to hide.

Easy is a descendant of slavery. His ancestors were the first humans in the world to be considered property under the rubric of pure capitalism. We were not only property but also compelled to become the almost completely dehumanized Technics of mass production. As time has gone on the rest of America—women, transgendered people, other socalled races, and even working-class whites—have begun to understand that this world wants to own their labor, hollow out their souls, and sell their produce in bulk to a world that does not know their names before, during, or after the material transaction that defines their brief, unsatisfying existence.

Easy’s history comprises jazz and lynching, new-world awareness under an old-world class system, and the transcendent knowledge, no, conviction, that no one will get out of this contest alive.

Easy is not afraid of death. He cannot but follow his understanding of what is right and wrong. And he knows that the LAPD, the mayor and governor, the congress and president are not, in so many ways, reflective of his values. Every case he takes on is defined by his personal understanding of honesty and justice. In this way Easy is an inheritor of the mantle of the hardboiled private detective genre that started with Philip Marlowe and the Continental Op. He must make up his own mind as to what is legal and not legal, fair and balanced, in a world where corporate interests eclipse the individual nine times out of ten.

This was always my notion of Easy Rawlins and the people that populate his neighborhood. He and his friends face every morning having to scramble up the slippery slope that is America, that is business as usual, that is an unequal sense of innocence and guilt, that recognizes and prejudges race, gender, and class before wondering about the who, what, and why of the crime committed. Easy is an American hero. He does not expect recognition, acceptance, or any sense of equality in the land that defines his experience as something other. He knows that he will never be seen as equal to those that believe equality is weighted by color and class, gender and belief. But Easy doesn’t care how he is seen or perceived; as long as they know he is blessed with the willingness to fight back, then the rules begin to tip, ever so slightly, in his favor.

Reprinted with permission of Walter Mosley and the Watkins/Loomis Agency.
Copyright 2020 by Walter Mosley. All rights reserved.

On Thursday, December 17th at 5:00 PST, California Book Club host John Freeman will lead a free hourlong conversation with Walter Mosely, which will include an excerpt reading, special guest Edwidge Danticat, and questions from the audience. Register to join here.

The 30th Anniversary Edition of Walter Mosley’s Devil in a Blue Dress is now available from Washington Square Press in the U.S. and Serpent’s Tail in the U.K. 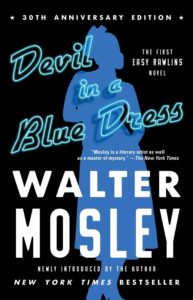 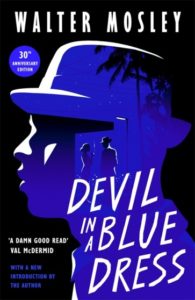 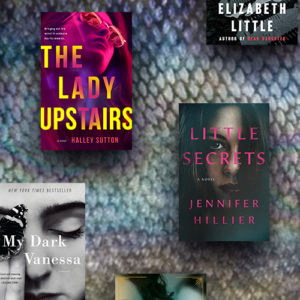 Readers, it’s been a rough year to recommend thrillers. Given what we have been living through, I had moments when I thought,...
© LitHub
Back to top