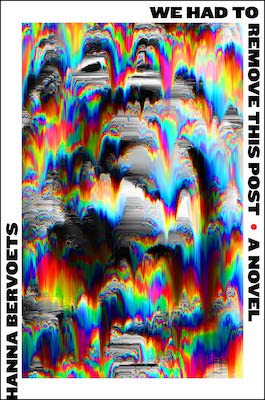 The following is an exclusive excerpt from We Had to Remove This Post, by Hanna Bervoets. In the following passage, social media and love intersect, and characters consider the differing pressures of work and womanhood.

My first real working day at Hexa was a Tuesday. I was originally supposed to start on Monday, but the only time Yena could meet me for a drink that week was Monday afternoon at three p.m., so I traded that first shift before I’d even really begun—I thought it was a miracle they didn’t fire me there and then. Yena was my ex-girlfriend. We’d met at the call center (I told you I’d been much too friendly there, didn’t I?) and had been together for exactly one year, seven months of which we’d spent living together in the house I inherited from my mother.

“You’ve probably been with lots of girls, haven’t you?” Yena said the first time she spent the night at my place. We were lying in what had once been my teenage bedroom. It had been years since I’d taken down the Green Day posters and photos of skateboarders, rolled them up, and planted a kiss on them before they disappeared into the storage drawer of the brand-new double bed, and there, in that slightly-too-pimpish four-poster bed, I was now making the fatal mistake of just grinning stupidly at Yena’s comment about lots of girls. “So that’s a yes, then,” she said, and because we both laughed I thought everything was fine. I hadn’t been with many girls at all. But I thought: I’ll let her believe that, it’ll probably make me more attractive to her.

The truth was that I’d only been in one long-term relationship before Yena. Barbra was fifteen years older; we’d met when I was seventeen and my mother had just been hospitalized for the second time— I’ll leave the psycholog- ical interpretation up to you, Mr. Stitic. By the time my mother died I was already living with Barbra. I rented out my childhood home (which was now mine, as my father had backed out of the driveway for the final time a few years earlier) to a bunch of students until, six years later, Barbra asked me how I would feel if her new lover, a massage therapist named Lilian who was barely twenty years old, were to move in with us. All I can say is we parted very amicably. We cleaved apart cleanly like two halves of a cake, the knife separating us with careful precision so that none of the marzipan roses were damaged. Barbra helped me find a polite way to evict the tenants from my mother’s house, and as I was packing the wheeled suitcases that she’d bought for me especially—she didn’t want me to go lugging boxes or trash bags — I realized that, more than anything, I felt relief: Deep down I’d always known that I would never have the balls to leave the woman who had done so much for me.

I felt free during those first few days by myself in the house where I’d learned to talk and play the guitar. I did the things I’d never been allowed to do when I still lived there, letting the trash bags pile up on the porch and having pizza rolls for breakfast, lunch, and dinner— as if I was trying to tell the house that it was mine now, I was the lord and master, from now on I’d be making the rules. I spent days on end gaming, lying in bed by myself or on the couch with Mehran, who was still my best friend back then. But then the fridge stopped working. The lawnmower had been sitting broken in the shed for a while — the grass had grown up to the porch. The washing machine was leaking so badly that the bathroom flooded every time I ran a load; I’d started wearing panty liners to save underwear. “You need new stuff,” Mehran said one afternoon when I offered him a tub of watery cream cheese. “It’s not healthy, having a broken fridge,” and he looked at me sternly until I finally admitted I couldn’t afford a new one.

So that’s how I’d ended up at the call center. Before Yena asked me out, I’d made out with Lorna a couple of times (who I suspect was mainly hoping that getting cozy with me on the dance floor would turn Mitch on), and I think that’s why Yena was trying to suss out if I’d already been with a lot of girls. And my God, how I ended up regretting not telling her the truth right away. One woman, I’ve only been with one other woman, and during the last three years of our relationship our sex life was nonexistent—but no, I didn’t say that. I let Yena believe I was some kind of Casanova, and from that moment on, pretty much every time we saw a woman on TV or on our phones she’d ask me what I thought of her. How attractive did I find this girl, on a one-to-ten scale, what about her lips, if I had to rate those separately, and was that woman’s ass a lot rounder than hers? And the gorgeous lead actress from that cop show, what if she suddenly appeared in front of you, would you try to hit on her? And what about that weather girl, and the woman living next door, and her own sister, did I find her attractive, and who did I find the most attractive, her or her sister? No, that was going too far, wasn’t it? “Haha, just kidding,” Yena would say.

I began to realize it wasn’t me that was the problem. It was the beauty standards society imposed on us, self-loathing and abandonment issues going back to childhood, yada yada, the stuff of women’s magazines, but I still felt responsible somehow. Yena’s insecurities were soap bubbles that I had to keep popping, like in that game you play on your phone, but new ones kept appearing and I didn’t want to lose, I didn’t want to lose her, because she laughed at my jokes and told me I was beautiful and she understood what was so good about not all but some cop shows, and at night, when she was lying with her head against my chest, which fit exactly because she was so petite, she made my heart beat slower—yes, slower, and that was exactly what I needed. So when, after our first couple of weeks together, she started asking me for things—very subtly, almost casually—I saw her wishes as welcome pointers: useful, concrete instructions for ways to prove my love.

A big TV so that we didn’t have to watch our shows on my buggy laptop anymore—hey, wouldn’t we both benefit from that? A sofa bed, so that her sister didn’t have to drive the ninety miles back to her place every time. That dress with the puffy sleeves, because she’d lost weight and all her other clothes reminded her of her old self. Those high-waisted pants, because she’d gained weight and didn’t feel pretty in anything else. Maybe we should have a proper meal out sometime, in that restaurant with all the climbing plants that we kept seeing in other people’s pictures, because we hadn’t seen much of each other recently, and wasn’t next week our seven-month anniversary? A trip to Paris, maybe, because we were arguing so much, and hadn’t I been the one to say we just needed to get away for a bit? That turntable so she could practice at home — this was sure to be a very lucrative side hustle, and it was high time she started putting herself first. A wig, two wigs, because of course she needed an image, and a decent camera while we were at it, because of course she had to promote that image with some professional-level PR. By the way, if she had a car she’d be able to get to gigs much faster, and if she had a better phone we could at least video chat if she had to go on a long trip at some point, and shit, that club where she was supposed to play hadn’t sold enough tickets and apparently if the show had to be canceled she had to cover part of the costs herself, those assholes with their fine print— did I happen to have it in cash, by any chance?

“She’s using you,” Mehran said one night when Yena wasn’t there. We were playing a new first-person shooter he’d brought and Mehran had just shot a bunch of zombies in the head.

“She’s not using me, I’m helping her with her new career,” I muttered as I reloaded my weapon.

“She’s only got, like, forty followers on social,” Mehran said, taking cover behind a barrel of gasoline.

“That kind of thing takes time.” “She’s a gold digger.”

“Gold digger?” I laughed and shot down a helicopter, shaking my head: “Dude, I don’t even have anything!”

“See, that’s the problem,” Mehran said, “and you know it,” and he lowered his controller to try to meet my eyes, allowing me to win the game.

Shop Talk: Lisa Unger on Waking Up Early, Carving Out Time, and Writing Longhand in the Target Parking Lot 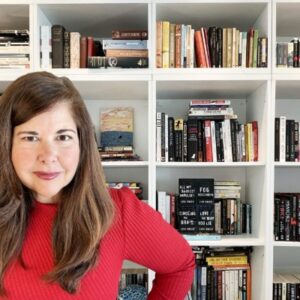 Shop Talk: Lisa Unger on Waking Up Early, Carving Out Time, and Writing Longhand in the Target Parking Lot Lisa Unger is the Queen of psychological suspense.  She’s hit every bestseller list, been published in thirty-one languages,...
© LitHub
Back to top