If the western is about delivering justice and noir is about the depths of the void, how can the two genres coexist?

VIA DOWN & OUT BOOKS

Back in 2006, television producer David Milch sat down for an interview with American Heritage. His latest show, “Deadwood,” was attracting notice for its portrayal of the American West as a hive of grimy outlaws shouting profane, pseudo-Shakespearean dialogue. Milch saw his work as a deconstruction of the old cowboy mythos:

“I did want to do a show on the American West, but I didn’t want to do a Western. I’ve never really understood or cared for the conventions of the Western. I always thought they had more to do with what the Hays Office would allow than with what happened on the American frontier. The more I came to read about the West, the more I realized how little what we called Westerns had to do with the West and how much they had to do with the vision of European Jews in the movie business who made a fortune selling a sanitized idea of American history back to America. The Hays Code said right up front that obscenity in word or action was an offense against God and man and could therefore not be depicted on a movie screen.”

The archetypical Western, in other words, is one where certain values inevitably triumph, where a good man with a gun will solve all the horrors and inequities plaguing his fellow citizens. Even many ‘revisionist’ Westerns such as “The Wild Bunch” and “Unforgiven” have quite a bit of that DNA woven into their narratives; in the latter film, for instance, Clint Eastwood’s William Munny is an evil man who’s killed pretty much everything that ever walked or crawled on the face of the planet—but when the time comes, he’s as much an avenging angel as the characters Eastwood played at the beginning of his cowboy career, fixing an unrighteous town with a couple loads of buckshot.

The archetypical noir, meanwhile, is where values are inevitably eroded, if not eliminated wholesale. The good man with the gun might survive, but chances are equally good he’ll end up dead in the trunk of a car. While the Western upholds the primacy of the law, noir goes in the opposite direction—those with the most guile win. Westerns are obsessed with justice—finding it, upholding it—while noir is focused on the evasion and subversion of it. Indeed, in that same American Heritage interview, Milch suggested that “Deadwood” had more in common with a particularly famous noir novel than Westerns:

“I’d say there’s a lot of the spirit of Hammett, particularly the Hammett of ‘Red Harvest,’ in ‘Deadwood.’ It’s hard to think of another book that is so un-apologetic in looking at that aspect of America. And it was written at a time when the so-called classic Western was being created.”

And yet, despite their differences, noirs and Westerns have been trying to blend for decades. The allure of drawing two quintessentially American genres together is just too powerful for many creators to resist. Throughout the 1940s and 1950s, Hollywood directors who tackled noirs also took a stab at Westerns, bringing as much bleakness as they could to the frontier.

For instance, you have Pursued (1947), directed by Raul Walsh (who also tackled White Heat, the early epitome of psycho noir) and starring Robert Mitchum; ostensibly a Western tale of revenge, it features enough backstabbing and twisted psychology for two traditional noir movies. Track of the Cat (1954), another western with Mitchum, also attempts to plunge its characters’ inner depths. Or Anthony Mann’s Devil’s Doorway (1950), starring Robert Taylor, which tackles Native American discrimination in a startlingly prescient way for a film of its era, and ends in a tragic note worthy of a noir hero.

To sidestep into literature: Jim Thompson’s The Killer Inside Me (the book came out in 1952; let’s ignore the film adaptations for the moment) is a noir set in small-town Texas that manages to outright subvert some of the most cherished tropes of Western literature, including the upstanding sheriff who offers up corny phrases. The book’s aggressively good-guy sheriff, Lou Ford, is actually a brutal psychopath who wrestles with what he calls “the sickness,” which finally propels him onto a killing spree that ends in a siege, with a burning house surrounded by law enforcement—another Western cliché bent in service of something darker.

Some Westerns, in other words, adopted the psychological framework of noir films, although none of those films achieved the same level of fame as the traditional Westerns of their era (such as Man of the West, High Noon, or The Gunfighter). You have to fast-forward another couple of decades, to the Coens’ No Country for Old Men (2007) and David Mackenzie’s Hell or High Water (2016), to reach a point where noir-western hybrids seem to achieve sizable box-office and cultural impact.

Both No Country for Old Men and Hell or High Water are notable in their subversion of the Western. No Country denies its audience the climactic gun-battle they might have been expecting, given its chase-driven plot and the constant intercutting (echoed in Cormac McCarthy’s source novel) between competent-but-doomed Llewelyn Moss and spooky super-killer Anton Chigurh. Hell or High Water, meanwhile, takes the traditional Western ethos—a sanitized celebration of core values—and recasts them through the lens of 21st-century economic depression; the way to generations of peace and prosperity lies through robbing banks. Despite taking place in the wide-open spaces of Texas, both films also feel suffocatingly claustrophobic at times, in the spirit of the best noirs: tight close-ups of nervous faces, characters framed so they seem squeezed by canyons or small-town banks or tiny trailers.

So the question remains: Are all of the above-cited films merely noirs in western clothing? Is it possible for a “pure” western to merge easily with noir, given their respective origins, or is the tension of those competing visions (however subliminal) impossible to eliminate? As with anything else in such territory, your own mileage may vary. What’s clear is that the collision between these two genres, and the wrestling and remixing of their respective tropes, has resulted in decades of fascinating work. 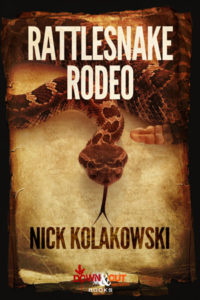 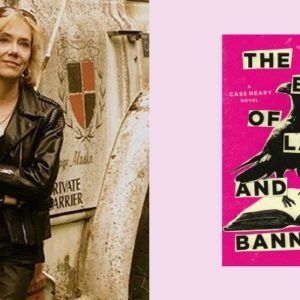 When I started the crime fiction binge in 2013 that landed me here (in a roundabout way) Elizabeth Hand’s Cass Neary series...
© LitHub
Back to top