After a break-in, a crime writer imagines her burglar, and reckons with our cultural notions about good-looking criminals.

When we got home, our house wasn’t as we left it. We stood for a moment, not yet understanding why all our belongings were on the floor, how each drawer had been pulled out, tipped empty. There was a space where my laptop should have been and there were loose wires hanging from the television unit. Our fridge door had been left open, the fuse had burnt out, our food was turning bad. We were in the middle of an oppressive heatwave.

Such hot weather that, in an attempt to air out our suffocating, tiny house, I’d left a small window open downstairs. Stupid, I know now.

‘We’ve been burgled!’ I wailed, as I panicked, touching everything.

People say the worst thing about a break in is the intrusion, the idea a stranger has been in your house. Yes, I realised, this is true. I felt mildly disgusted as I looked at my underwear strewn across the bedroom. I pictured a man, pale and rail thin, with a harsh face and mean eyes. I saw him stalking through our house, sweating from the midday heat. At that time it felt so personal, so hurtful. I hated him. I pictured him as vividly as I could so I could hate him properly.

Obviously, I would be able to tell just from looking at him that he was a bad person. Isn’t that how it works? They are different to us. Bond villains have scars, cult leaders have swastikas carved into their foreheads, mass-shooters have that crazed look in their eyes. We find safety in these differences between us and them. When these conventions are broken, when the blandly good looking guy next door turns out to have a human head in a freezer, it shocks us. Shouldn’t we have known?

When the killer is a child we look at them and we say they must be ‘evil’. Evil is one of those things that can hide and inhabit even those who are supposed to be innocent. Evil is sneaky like that. Evil can be beautiful. This is an easier way to explain this type of crime than to accept the reality that, more frighteningly, perhaps anyone could do bad things, given the right (or maybe wrong) upbringing, circumstances.

My second book One More Lie follows two adults who are living under new identities, after serving their sentences for a crime they committed as children. In the book the female character, Charlotte, captures the imagination of the public more than her accomplice Sean. Sean is dismissed as “exactly the type” who would do such a thing, an angry child with little adult supervision whose story was inevitable. Charlotte, however, is endlessly fascinating to people, especially the press, as she doesn’t look the type. In fact, she looks almost angelic. Big eyes, beautiful. So sweet. People ask, was she led astray, or is there a cunning psychopath behind that smile?

Sometimes, not looking like a criminal can work in a suspect’s favor. Look at the recent success of Jeremy Ray Meeks, whose mugshot went viral after his arrest for…well, it doesn’t matter anymore, does it? Jeremy is no longer a criminal, he is a supermodel, he dates a billionaire’s daughter. And a quick Google of “hot mugshot guy/girl” shows our fascination with this contradiction.

Ted Bundy was good looking enough to cast doubt on his guilt for years, long enough for him to escape on two occasions from prison and go on one further terrifying and brutal killing spree. If he hadn’t have looked the way he did, would he have been granted the same kind of freedoms he was? Just charming enough, just handsome enough, to earn people’s trust and get what he needed.

Was she appropriately sad enough about what had happened? Did she conform to the role of secondary victim, or was she a villain?

Sometimes, being good looking works against the suspect. Amanda Knox was given an inordinate amount of media attention following the murder of her flat mate Meredith Kercher. In the UK she was nicknamed “Foxy Knoxy,” she was also called, “Angel Face,” and her behavior was monitored obsessively. Was she appropriately sad enough about what had happened? Did she conform to the role of secondary victim, or was she a villain? Either way, Amanda Knox fascinated us and it wasn’t to her advantage. Had she been less attractive, might she have escaped our scrutiny entirely?

The UK press certainly had no qualms about sexualizing her, especially when a narrative developed about there being a sexual motivation to the crime itself. It was a lurid and implausible story about a sex game gone wrong. The kind of story it’s impossible not get drawn in to, at the expense of the truth or of sensitivity for those involved.

There were no repercussions for those who expressed an attraction to the idea of Knox as a hot murderer, to the fantasy of a sexy dangerous female. Casey Anthony was similarly objectified during the course of her trial. Both women are now released, they are not guilty, and we have moved on.

Or have we? The Netflix series The Ted Bundy Tapes reignited everyone’s interest for a semi-hot serial killer. A trailer was released for the Ted Bundy movie Extremely Wicked, Shockingly Evil, and Vile (will I ever be able to recall the title of this movie off the top of my head?) starring Zac Efron as the man himself. And people were…offended? Yes, very offended, because Ted Bundy shouldn’t be sexualized. Those women who said he was hot should be ashamed of themselves. We shouldn’t portray Bundy as good looking and charming and we certainly shouldn’t fancy him, or even a representation of him.

Perhaps there are no clear rules to dictate which kind of criminal we can crush on and which we can’t. Maybe it will always be okay to have a kink for female criminals because if you’re a man, you likely still hold the power in that fantasy.

The police caught the guy who burgled our house. They set a date for his hearing and gave us his name. I looked him up on Facebook but found no one by that name who looked like who I imagined. None were particularly hot, either. Just normal men, some with children. He pled guilty to burgling us and two other houses, so we were never called into court. I still don’t know what he looks like. He was sentenced to six years. It seemed excessive, considering how little we’d been affected in the aftermath. By the time they told me this I barely thought of him at all.

Six years of a faceless man’s life. We both felt a sadness for his loss. Ours, comparatively, had been so small. Nothing which couldn’t be replaced. I wonder what he looks like. I wonder why it matters.

Amy Lloyd studied English and Creative Writing at Cardiff Metropolitan University. She won the Daily Mail First Novel competition for The Innocent Wife in 2016. She lives in Cardiff, Wales, with her partner and two cats. Her latest novel is One More Lie. 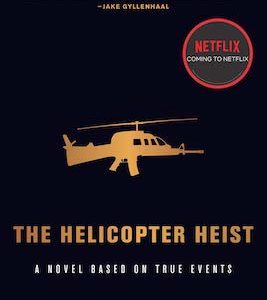 “Here it is,” Michel Maloof said in English. He lifted the black briefcase from the chair next to him and placed it on the table. Director...
© LitHub
Back to top