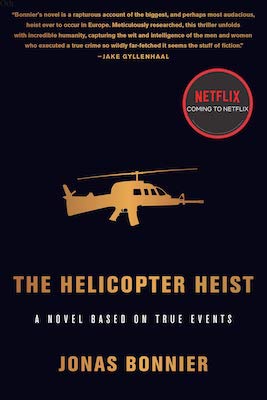 The following is an exclusive excerpt from The Helicopter Heist, a novel based on the 2009 true story of four men who steal a helicopter and plot to rob $6.5 million from a cash depot in Stockholm. Jonas Bonnier's reimagining is soon to be a Netflix film starring Jake Gyllenhaal.

“Here it is,” Michel Maloof said in English.

He lifted the black briefcase from the chair next to him and placed it on the table.

“Your briefcase?” Mild asked. “But . . . I think I must have misunderstood something. I thought this meeting was about streamlining our Swedish distribution activity.”

“Exactly, exactly.” Maloof smiled, flashing his white teeth, set off by his dark beard, at the two men. “There’s no better way to put it. Streamlining. In Sweden.”

“What do you mean?” Mild wondered.

“I mean that maybe . . . now that we’re speaking in English anyway . . . this could be of interest elsewhere than just Sweden?”

The best way to deal with a bluff was to call it.

Maloof was still unsure whether the Englishman was who he claimed to be. The idea that the chairman had flown in to see him seemed absurd.

But the older man remained silent, and Maloof felt more like he was being observed than questioned.

“Let me . . . tell you about my briefcase,” Maloof continued. He had told Anders Mild’s secretary that he had flown up from Malmö for the meeting in Stockholm. “It was on the floor under the seat on the plane yesterday. And I had it next to me this morning when I drove over here. So . . . well . . . how many people do you think noticed it?”

It was a rhetorical question. The black briefcase on the table was as anonymous as the room they were sitting in. It looked neither cheap nor expensive, and it seemed to be utterly lacking in design. From a distance, it looked like leather, but a closer inspection would suggest it was some kind of tough plastic.

“Are you saying . . .” the Englishman began. He had worked out where Maloof was heading.

“Right, right.” Maloof smiled, and his grin grew wider. “This briefcase isn’t just the equivalent . . . it’s more secure than any other security bag on the market. It holds much more.”

He tried to prevent his pride from turning into self-conceit. But the truth was that Maloof himself was fascinated by the bag on the table in front of him.

The black briefcase on the table was as anonymous as the room they were sitting in. It looked neither cheap nor expensive, and it seemed to be utterly lacking in design.

Anders Mild seemed to have worked out what the day’s meeting was about, what Maloof was doing there. The director twisted uncomfortably in his seat and gave a short sigh. Plenty of salesmen tried to sell new security bags to G4S. A Swedish company from the north of the country, SQS in Skellefteå, was already well into the development stage and had a number of customers on the continent. Maloof was sure that SQS, like everyone else, had also tried to get a meeting. But without a Zoran Petrovic to date the director’s secretary, those doors remained closed.

It was too late now for Mild to do anything about it; Maloof ’s bag was already on the table.

“Is it really possible?” Mild asked. He sounded doubtful. “For it to be that big inside?”

Without further ado, and with an infectious enthusiasm, Maloof began his detailed demonstration of the inside of the briefcase.

For years now, G4S had been using blue security bags produced in southern Germany. One of Zoran Petrovic’s Serbian contacts had been to the top-secret factory, and it was there that the idea had been born. The German bags were big and bulky, meaning the guards had to move them about using small dollies, and it was impossible to either pick up or drop off the cash without drawing attention to it. As a consequence, they had made a virtue of necessity and developed the big blue bags into portable spy centers. They contained, in addition to GPS devices capable of being tracked within a sixty-mile radius, built-in security cameras and hidden microphones. Which meant that they also registered and documented everything that a potential robber said or did. Many of Maloof’s friends had learned that very fact during trials, as prosecutors presented the court with evidence that was impossible to deny.

According to Petrovic, the bag’s greatest feature was its security-protected locking function. For one, it was impossible to pick with ordinary skeleton keys, but screwdrivers, crowbars and brute force wouldn’t work either. A couple of inexperienced kids or an opportunistic junkie would never manage to crack the lock. Even professional robbers who took the blue bag to a workshop and laid into it with real tools would fail. The bag was booby-trapped and would detonate if opened incorrectly, causing dye ampoules to explode. The money, and sometimes even the robber’s clothes, would be destroyed in the process.

The black bag Michel Maloof was demonstrating to the European division of G4S that Tuesday afternoon in February could boast all the same features as the blue bag. And since the company from Skellefteå still hadn’t managed to take out patents on its products, Maloof’s bag had also borrowed several functions from them.

But in addition to that, there were two crucial improvements. First of all, Maloof’s black briefcase was roomier than the blue bags. The security and technology features had been condensed and stored in the lid and the bottom, leaving more space for the valuables requiring transport. The result was a light, discreet bag, when compared with the blue monsters currently being used.

“Incredible,” Mild said once he had allowed himself to be convinced.

He looked the two men straight in the eye. They still hadn’t talked prices; the men hadn’t asked and Maloof hadn’t wanted to bring it up until he was sure they were convinced. But judging by how intensely they had been nodding during his presentation, he was cautiously optimistic. The Englishman was harder to read, but toward the end he had even allowed a quick smile.

Now the older of the two cleared his throat and spoke directly to Anders Mild.

Almanza’s English was the kind Maloof had grown up with on TV during the late seventies, from programs based in rural English castles and country manors, with men in green tweed clothing who hunted foxes at weekends and employed an army of servants.

The Englishman turned to Maloof.

Almanza’s English was the kind Maloof had grown up with on TV during the late seventies, from programs based in rural English castles and country manors, with men in green tweed clothing who hunted foxes at weekends and employed an army of servants.

“I’m in Sweden for a conference, not flying home until tomorrow evening,” he explained. “Anders asked whether I would like to join him for this meeting, and I answered yes mostly because I had nothing urgent to attend to. I’m glad I did.”

Maloof tried to hold back a satisfied smile, but he only half- managed it. He stroked his beard and looked proudly at his black security bag, as though it had performed particularly well.

“Naturally, there are a number of questions we will have to return to,” Almanza continued. “Among them the security in the Slovenian factories.”

“And then there’s the question of exclusivity.”

“Exclusivity. If G4S makes an order . . . then obviously none of your competitors would be able to buy our product.”

He gave a wide smile. The Englishman nodded with satisfaction. Maloof realized that the price was clearly a minor detail in this context. They still hadn’t asked about it. He had gone into the meeting with the intention of asking for 20,000 kronor per bag, but he now realized he could just as easily say 30,000. It would make absolutely no difference. He hardly dared think about how much money that would mean within the Swedish market, but imagine if they were talking about a Europe-wide deal?

According to Zoran Petrovic, each bag cost 5,000 kronor to produce. The number of security bags used in the Swedish market was somewhere around ten thousand.

The amount was dizzying.

“And there will have to be some discussion in London,” Almanza added drily, “but I’m fairly sure my enthusiasm will rub off onto our colleagues there.”

He raised a confident eyebrow to show that this was just a formality, and Anders Mild nodded in agreement.

“And you could fly over to London to repeat this presentation?”

When Michel Maloof and his family had landed at Arlanda almost thirty years earlier, he had torn up his Lebanese passport and flushed it down the toilet before they even reached passport control. That was what you did back then, that was the advice they had been given from relatives already in Sweden. Without a passport, refugees were registered as stateless, which minimized the risk of being sent back. Where could they be sent back to? But that early morning in a toilet cubicle at the airport was something Maloof had come to regret over the years. He and his family had been permitted to stay in Sweden, but getting ahold of a Swedish passport without a foreign one to swap it for had proved almost impossible. And by the time Maloof had waited long enough for it to finally be a possibility, he had been arrested for the first time.

That meant he had ended up at the back of the line. The same thing would go on to happen again and again. Michel Maloof was now thirty-two, but he still didn’t have a passport, neither Lebanese nor Swedish.

And since England was outside the Schengen zone, there was no way he could make the trip to London. He would have to send someone else. Petrovic could go. It wasn’t a big problem.

Rick Almanza stood up, and Mild did the same.

“Thank you so much, Michel,” the Englishman said. “It’ll be a pleasure to do business with you.”

Maloof got to his feet. He felt dazed and confused. He shook hands with the two men on the other side of the table.

He had just earned more money than he ever could have dreamed of. Millions. Tens of millions.

“We’ll have plenty of time to get back to you about that,” the older of the men said. “The contract on our current security bags doesn’t expire until 2024. That gives us fifteen years to negotiate.”

Maloof’s smile faded. Had he heard him right? Had he misunderstood?

“As I’m sure you can understand,” Anders Mild explained in Swedish, “we can’t do much as long as we’re tied into our current contract. But we plan ahead within G4S, and I hope you can do the same.”

Were they pulling his leg? 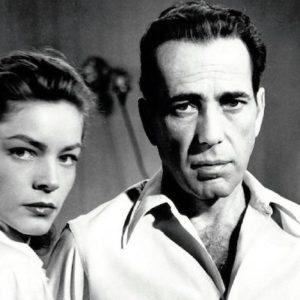