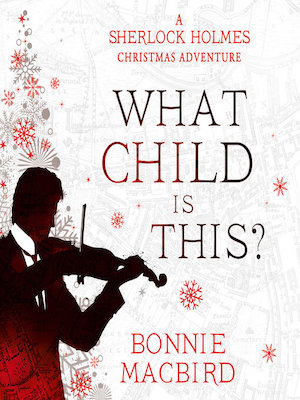 The following is an exclusive excerpt from What Child Is This, by Bonnie Macbird. In the following passage, Sherlock Holmes receives a gift of fruit and a visit from a lady whose son he rescued the day before.

At a little after ten, Mrs Hudson and Billy, our page, approached the door to the sitting-room bearing between them an enormous basket of fruit with a red ribbon tied atop it.

‘Mrs Hudson,’ I exclaimed. ‘Billy! Let me help you with that.’

I placed it on our dining table, where it took up nearly the entire surface. Against the background of Holmes’s sombre quarters, it appeared like a sparkling pirate’s treasure chest set out in a dusty library.

Oranges, pears, lemons, apples, grapes, currants, pomegranates and even peaches and plums were crammed in profusion into the wicker basket. On the top was a pineapple. The out-of-season produce must have cost that same pirate’s ransom.

Mrs Hudson smiled like a child on Christmas morning. ‘Indeed, Doctor. And just in time. The larder, I am afraid, is a bit thin. Mr Holmes has been generous to his last client.’ I briefly thought of Holmes’s fee from the Marquis, but I knew I would not dissuade him from giving it to Heffie.

Handing both Mrs Hudson and the boy some fruit, I sent them off and removed the envelope to see who had sent this gift. It was a name I did not recognize.

‘From the Endicotts, I presume?’ Holmes emerged from his bedroom, dressing-gown over his other garments, finishing his tie.

‘Yes. Who are the Endicotts?’

‘Lady Endicott is the lady whom we helped in the street yesterday, Watson.’

‘Oh! But I did not get her name. How did you divine this?’

‘It was on one of three packages that fell from her maid’s hands. Quite an interesting woman.’

‘You were there but an instant, Holmes! The name, well, I see . . . but, all right then, how do you deduce that she is interesting?’

‘I observe, Watson. One of the packages contained books, unwrapped—therefore for herself. Philosophy, Darwin and Dickens.’

I shook my head in admiration. In the time it took to pull the child away from the attacker, Holmes had managed to note all this as well.

He gestured to Debrett’s, lying open on our dining table. ‘Of course, I have researched. Her husband is the second son of a Duke. Though she is apparently wealthy herself.’

‘Kidnapping for a ransom, do you suppose?’ I said.

‘I do not theorize in advance of the facts, you know that, Watson. However, I wonder at this scoundrel’s desperation.’

He moved to the window, pulled back the lace curtain and peered down into the street. Outside the snow drifted down in lazy flakes. ‘If the lady is willing, I am inclined to insert ourselves into the matter,’ said he.

‘More than that. Find the man and see him gaoled. Giving her my card was an excellent move, Watson.’

‘Well, the fruit is rather nice. But one cannot presume she knows or has looked up your profession.’

He stood at the window looking down at the street and turned to me with a smile. ‘Because she is in the street below, looking for our address. So, thank you, Watson. I suppose my reputation has helped, just a little.’ He darted into his room, pulling off his dressing-gown, and emerged a moment later in a neat frock coat, smoothing his hair.

Lady Endicott, along with her son Jonathan, soon stood before us. Unencumbered by her winter coat and hat, and free from the terror of a recent attack, the lady’s serene beauty was evident. She was of medium height, well-fed though not plump, and her golden hair was smoothed fashionably back from her face into an elegant braided chignon, with small curls in front. Her expensive dress of marine blue silk and matching hat conveyed the understated elegance of extreme wealth that does not need to announce itself loudly. The little boy, too, was carefully attired, but oblivious to the fact, as are all children.

‘These are the two gentlemen who helped us yesterday, Jonathan,’ said the mother. The child ran over to me, his arms wide for a hug. I bent down to receive it.

‘You made quite an impression, Watson,’ said Holmes.

The child backed up with a smile and extended a tiny hand. I responded in kind, delighted by the little one’s instant poise. This formality accomplished, he dropped my hand and ran straight past me to the chemistry table.

‘Ohhhh,’ he squealed. ‘Mummy, look!’ He snatched up a small glass test tube filled with a clear liquid, upsetting some papers onto the floor as he did so.

I leapt up, instantly scooping up the child. Holmes removed the glass tube from his hand gingerly, setting it down well out of reach. ‘Sulphuric acid,’ he remarked.

He and I exchanged a look.

As I returned the boy to his mother, I noticed a prominent port-wine stain on the back of the child’s neck. It was at least two inches in diameter and in an unusual shape.

‘I am so sorry,’ said the lady. ‘Jonathan, you know better than to touch things which do not belong to you.’ While her reprimand was gentle, the boy paid close attention.

She took Jonathan and placed him next to her on the settee. She caressed the back of his neck and looked up at me pointedly. She had clearly noticed me observing this mark.

‘Yes, Dr Watson,’ said she. ‘I see you have noticed the “star”. Jonathan has been blessed by this special gift—in the shape of a star. We think of it as the Star of Bethlehem. Jonathan was born on Christmas Day.’

‘Well, then, a birthday coming,’ said I.

‘Yes, he will be four years old. A grand party is planned!’

As if on cue, the little one shouted in a high-pitched voice, ‘Merry Christmas! Happy Birthday!’

Holmes, whose hearing was very acute, grimaced slightly, putting a hand over one ear. ‘Lady Endicott, let us get to the crux of why you are here. I take it you know who I am?’

‘I do. And I am now aware of just how lucky I was yesterday. Several of our servants have read of you, Mr Holmes, and my ladies’ maid advised me to consult you.’

‘Yes, Jenny reads those . . . those crime papers. The Illustrated Police Gazette and others like that,’ said Lady Endicott. ‘They all do.’

‘I would like to hire you, sir, discreetly, of course, to keep this man from us. And to bring him to justice. Or whatever it is that you do. Send him to gaol, I hope?’

‘My raison d’être is indeed justice, Lady Endicott,’ said Holmes. ‘The police and the courts see the deserving to prison. Now, to the point. Do you have any clues as to the identity of this man? Did you recognize him?’

The Story of a Cheat Deserves to be Remembered 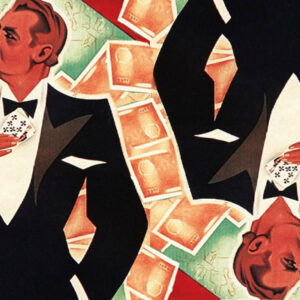