Lee Irby on the Infinite Human Drama of Youth Sports

Outside of my writerly pursuits, I spend much of my free time coaching sports, an activity that might strike some as utterly heteronormative, rancidly bourgeois, and stultifyingly clichéd. Yet don’t be so quick to dismiss my foray into the soft belly of the addled American middle class. Unlikely as it might appear, there are lessons here for the burgeoning novelist. In fact, if we proceed genre by genre, you will find Little League fields surfeit with dark secrets, unspeakable tragedies, lacerating comedy, budding romance, and even a profound lesson or two about humanity.

MYSTERY
One day last August, our Little League awoke to the horrifying news that ALL OF OUR MONEY WAS GONE. Not a few hundred dollars in dues, but well over $30,000, apparently purloined by the software company that was supposed to be processing our credit card transactions. Other sports leagues around the country also found themselves in the same boat. A conspiracy was potentially afoot, engineered by a smooth-talking Texan with a predilection for the finer things in life. As is typical in such cases, he was allegedly robbing Peter to pay Paul, taking from one league to give to another, until the Ponzi scheme came crashing down.

Or was it an inside job?

My mind began to tumble, entertaining possible scenarios in which someone within our league helped to orchestrate this dastardly con… after all, among the coaches there had been rumors about improper disbursement of funds, and a former league president had once worked for this software company. Hadn’t he recently lost his job? Motive, opportunity… when the New York Times ran a front-page article on how various sports leagues were being raided by nefarious coaches, I never thought that could happen to our well-established organization which could summon the mayor to throw out a first pitch on Opening Day.

Honestly, even a no-talent hack could concoct a plausible murder-mystery out of this chaotic sequence of events. But too often novelists block themselves off from the quotidian pace of everyday life, thinking that the next great idea will come from a writer’s conference or artists’ retreat. Here Marcel Proust offers excellent example: retreat is possible if it is total, but when you actually want to be involved in your community, that doesn’t work. Not that I don’t dream of a cork-lined room where I can spend hours in idle reflection… but the fact is, I must scramble to find the time to scribble, and always in my head I hear the poet John Berryman, who told us in Dream Song 10: “Life, friends, is boring. We must not say so.” Sage advice from a man who threw himself off a bridge. But today many of our best novelists spend far too much time with each other at confabs, instead of getting hands dirty in real life (IRL for you gamers). Faulkner always listed his occupation as farmer, never novelist, and when he did spend time in academia at the University of Virginia, he’d often stop by a fraternity house to sip some bourbon with the pledges. Hard to imagine one of our august MFA stalwarts doing the same today.

Our league never recovered the $30,000 and no one has been charged with a crime.

ROMANCE
These bodice rippers seem so easy to write, as long as you can thumb through a thesaurus and have a strong stomach for purple prose. All great love stories, though, need the fuel of raw human emotion to propel the plot. While children run around the bases on a little diamond, the adults in the stands are busy playing their own games, often illicit and sometimes painful.

Again, make no assumptions about what constitutes a “normal” Little League family. Such a creature does not exist. On many teams I have had players with two mommies (though never two daddies). Because of my own background, my heart breaks for the single moms who do their best to do it all, dinner and homework before game time, often dropping off kids while wearing work clothes, while the stay-at-homes prefer fashionable sweat jackets and yoga pants. But even supposedly perfect marriages hide numerous flaws that a baseball field can expose the way UV light can illuminate the blood splatters of a murder scene.

When we drafted our teams before the start of the season, often we had to balance certain off-the-field issues that involved romantic entanglements. One time I was coaching with a man whose ex-wife had begun to date the coach of another team, and there was hostility that drifted down to what side families had taken in the divorce. So we couldn’t draft Tommy because Tommy’s parents were friends with the ex-wife or the new boyfriend. It got complicated.

But far more common was the dissolution of families. One season I coached a player whose mother just vanished. One day she left without a word and it rattled all of us, frankly, because parenting and marriage can tax even the noblest of us… but who’d ever actually follow through on an insane idea to haul ass? There were also the newly divorced dads who insisted on bringing the New Girlfriend to the games, to the horror of the ex and the kid. I coached with a guy who showed up to every game drunk as a skunk, and to no one’s surprise that marriage didn’t survive. Happy families are all alike, Tolstoy tells us, and I saw plenty of those as well, far more than unhappy ones. But coaching in youth sports goes well beyond the game; I often have to act as a counselor, mediator, and therapist all at once.

YA
The dystopian landscape is all the rage these days in Young Adult, and novelists often populate a hellish civilization with vulnerable, introspective teens—not unlike what goes in youth sports in our insanely competitive culture. Kids today feel pressures that didn’t exist 30 years ago. Sports were mostly recreational and based on the quaint notion of the neighborhood, but now youth sports has morphed into a bloodsucking monster that threatens to suck the joy out of one of life’s most sublime pleasures.

And the kids mostly resent it.

Not all of them. Some ten-year-olds are as serious about their performance as any major-league player, and it’s obvious this drive comes from within. Parents often feel obligated to explain that they’re “not pushing” their children, as if somehow ambition has become a crime. But the motive stems from the sad fact that many kids are being pushed, which always leads me to the tale of Jeffrey.

Jeffrey was an eleven-year-old with sky-blue eyes, floppy brown hair, and dazzling white teeth. He looked athletic, ran fast, and couldn’t play baseball to save his life. He couldn’t catch or throw, and he usually swung at pitches by the time the ball reached the catcher’s mitt, if not a second after. But he never seemed bothered by his ineptitude. He was always smiling and laughing in the dugout, and when it was his turn to sit out, he usually found a small broom and would spend his time cleaning up and kind of dancing around, because he enjoyed tap class.

Jeffrey’s father and entire extended family drove big trucks, talked loud, and wanted baseball to cleanse Jeffrey of his effete manners, which was laughable because Jeffrey was completely happy being Jeffrey.

During our last game of the season, we were playing a team that had gone undefeated. Their moms had even brought cupcakes to the game, each one decorated to celebrate their undefeated season, assuming that they’d beat us. It all came down to Jeffrey. We were losing by one run with two outs in the last inning, and Jeffrey came up. We yelled encouragement, but since he struck out almost every time, it seemed like the game was over and the other team would gobble down their prophetic cupcakes. But the pitcher threw a ball that struck Jeffrey in the helmet—and he was awarded first base! Not having spent much time on the bases, Jeffrey galloped in glee down the line and then we went on to win the game and spoil the cupcakes. Jeffrey never played in our league after that, and I often wonder if his family came to accept him or if that battle continues to rage.

TRUE CRIME
Life is stranger than fiction, goes the truism, and novelists must never forget this. One reason I am suspicious about writer’s conferences and the entire infrastructure of fiction writing is my fear of missing out. If I’m around other writers, I’m not growing as an author. I’m not unearthing the deeper truth or finding the unknown. If I lived the life of constant travel and self-immersion, I never would have met The Man Who Fleeced New Haven.

Yes, coaching Little League allowed me to meet a real con man. Rex (not his real name) came across as polished, intelligent, and affable. He was well-dressed, knew much about baseball, and intimated that many major league players were his friend, though I didn’t know what he did for a living. Then one night my assistant coach, who owned a nightclub, told me that last year he’d seen Rex getting arrested. After the game I rushed home and googled the man’s name and sat slack-jawed as the search results unfurled. Indeed Rex had been arrested for scamming someone out of forged Super Bowl tickets—but he’d also been arrested in many other cities and had changed his name à la Jay Gatsby, who was Rex’s closest literary analogy. According to Google, he’d been sued for millions of dollars by a man he’d conned in Sarasota, and back in the 1990s he’d managed to bamboozle the city of New Haven in a redevelopment scheme, hence earning a sobriquet worthy of Damon Runyon.

And now he was calling me several times a week. His son and mine were becoming friends because his ex-wife lived one block away. During our conversations he’d drop hints of investment opportunities and famous people he knew, and then during the course of the season he cozied up to our wealthiest families. None of which is a crime… and I honestly enjoyed his company, because he was brilliant and it was easy to see how he was able to meet someone in a Four Seasons and proceed to get a signed power of attorney from a multi-millionaire, which is no small task.

Then Rex got cancer and began to undergo chemotherapy that led to heart troubles. The night before a surgery that had a 30 percent chance of him dying on the table, he called me and talked about what mattered in life—being there for our children. He wanted to watch his sons grow up but was in existential agony because tomorrow he might die. I’ve never had a more gut-wrenching discussion—how do you cheer up a dying cancer victim? What words could I say, or anyone? Such are the moments that give birth to literature, which at its best gives voice to what is unspeakable. These moments come in many forms that no class or workshop can teach a novelist.

Rex didn’t die and today we continue our friendship. We’ve never spoken of his past, but he knows I know and he’s thankful that I never judged him like so many others.

But I’m not investing in his latest scheme: personalized tubes of sunscreen.

Lee Irby teaches history at Eckerd College and lives in St. Petersburg, Florida. He is the author of the historical mysteries 7,000 Clams and The Up and Up. 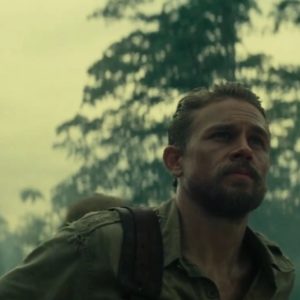 Over the course of his career, David Grann has spent extensive time with killers, confidence men, spies, hustlers, informants,...
© LitHub
Back to top