Jeff Abbott on Losing His Library To A House Fire

The lightning bolt blasted down from the fast-moving summer storm, exploding into our roof, through our attic, and into the guest bedroom. Fire erupted on the bed. My sons put out that fire in the bedroom, but the roof and attic were ablaze. Within two minutes, my family were out of the house, with our pets, pulling our cars out of the garage, as the flames spread. Despite the heavy rain, smoke already wreathed our home. We got out with the clothes we had on our backs. We were safe. We watched our home burn as multiple fire departments responded, as news crews and the Red Cross arrived, as dozens of our neighbors gathered around us to offer comfort, as our family tried to grapple with what seemed an unimaginable new reality.

Hours later, after the fire was out, the fire chief helped my wife and I wade through a foot of water in the remaining shell of our home.  We surveyed, in disbelief and shock, the catastrophic damage—missing walls and floors, splintered beams, debris everywhere. The air reeked of smoke and the raw, wet innards of our house. Then I saw, by the glow of my flashlight, sodden and burned books on the shelves and in the water and I thought, for the first time: Oh. All my books.

I lost over 2,500 books in the fire. Lost to water, lost to fire (for weeks afterward, until the house was torn down, we would find partially burned pages of books that had fallen down from the attic or second story, like a kind of printed ash), lost to damage as smoke filled my office for hours and grit and stench settled into the pages.

I know that having a personal library of that size is a privilege. Many writers and readers don’t have that many books (and I have always been amazed when I meet writers and readers who have far more). We lost clothes, shoes, furniture (including items that had been in our families for generations), photos, art, toys, electronics, and far less replaceable items than books. But a library built from one’s childhood is a very singular collection. The library was a map of my life as a reader, and later a writer, from my first books to books I’d recently bought but not read yet. I realized, once it was gone, that my book collection was an annex to my imagination.

Article continues after advertisement
Then I saw, by the glow of my flashlight, sodden and burned books on the shelves and in the water and I thought, for the first time: Oh. All my books.

I lost books I’d bought at garage sales when I had very little money. I lost books I’d bought while on tour the first time I hit the New York Times list.  I lost books I’d been given in my tote bag at conferences, such as Malice Domestic and Bouchercon. I lost my Hardy Boys novels that were consistent birthday and Christmas gifts from my parents and grandparents when I was a kid. I lost books that friends had given me. I lost the complete Sherlock Holmes collection that a neighbor had bought me when I was a child and having surgery. I lost books I’d bought for research, both on projects that I ended up never writing and texts that were central to my novels. I lost paperbacks that showed their age with yellowing pages and cheap prices—Agatha Christie and Robert Ludlum, books I bought as a teenager back in the 1980s when I first got serious about reading crime fiction. I lost the first hardcover I ever bought with my own money (Stephen King’s THE STAND); I’d begged my mom to drive me to the bookstore on the day it came out. I lost books I’d bought for my dad, and then inherited when he passed away. I lost the immediate “to be read” stack on my bedside table, crushed by a falling ceiling and drowned in water—books by Lyndsey Faye, Ann Cleeves, Robert Caro. I lost books where I’d read one book by the author and then bought everything they’d written (Josephine Tey, Eric Ambler, Patricia Highsmith). I lost complete collections written by some of my closest friends (Daniel Stashower, Harlan Coben, JT Ellison, Meg Gardiner). I lost not only crime novels, but fantasy, science fiction, young adult, histories—books not in my field, yet ones that still helped light my imagination. I lost copies of my own books—from earliest drafts, to finished novels, to editions published in over twenty languages. (I never knew quite what to do with my books in Thai, Estonian, or Dutch, but I was so happy to have them.)

I said before a library is a kind of annex to your imagination. Lots of writers say they don’t read other novels when they’re writing, but I always found inspiration in the books in my collection when the writing wasn’t going well. How did a writer deal with pacing? I could, by going to my shelves, see how it had been handled by authors as diverse as Ngaio Marsh, James Lee Burke, Sue Grafton, or Laura Lippman. When I couldn’t decide on an opening line, I could look at dozens of examples to fire my own imagination. Equally important: what was the last line of the book, the parting words to the reader that might encourage them to read the next book? I could sample so many writers. I could do the same at a public library, but since I’d read the books on my shelf, I could remember and study how each author led to the finale. Did I want an inspiring sampling of how other authors had written weather, or reveals, or chases, or dialogue? I could steep myself in dozens of good examples when feeling blocked or uninspired, the same way a painter can wander through an art museum and get ideas on how to solve their own particular challenge by studying how other artists used light, color, shading, and perspective.

And if I wanted to write my favorite kind of CrimeReads essay—the ones that list books with an interesting common element, and always end up expanding my to be read list—like “five novels to read after your house burns down”—then that would be a simpler task with an intact library. Then I could have marched down my shelves, pulled books with an unexpected commonality, and written about them. I thought about doing that kind of essay when CrimeReads asked me to write something. But right now, it was much harder to do, for me at least, with my library gone. It’s been fifteen months since the fire, we’re about to move into our rebuilt house, and I can’t remember all the books I’ve read and lost. Their physical proximity was a daily reminder of my reading history.

I’ve always been a reader who preferred print books. But I became painfully aware that if I’d had more e-books, I’d still have those books, even though my e-reader and my tablet were both destroyed in the fire. I could have just re-downloaded those volumes. Print books are vulnerable to the ravages of fire and time. But. . .I still prefer them. I love the physicality of the book, the spatial memory of knowing that the great passage I read was in the final quarter of the book, near the top of the page (That, I can find in a flash, even though one can search an e-book).

If you have a large book collection, or aspire to have one, what should you do to protect it?

You may be thinking: well, my home probably won’t be hit by lightning. And yes, my experience is relatively rare. I hope you and yours never go through this. But every book collection is at risk, and there are wildfires, hurricanes, floods, storms, tornadoes, earthquakes and more to consider. This could happen to you and your books. If you have a large book collection, or aspire to have one, what should you do to protect it? Here are some tips that may help (you should of course consult with your insurance agent for specifics of your own coverage):

When you decide to replace your library, you may find that you don’t need or want as many of the books as you had before. It’s such a massive culling that you feel often like you’re starting from zero. And frankly, you’re dealing with so much after the loss of a home, and living in temporary quarters while you’re rebuilding, you don’t want to buy lots of replacement books just to move them. Wait until you’re settled back into your life after the fire, and preferably back in your own home. Think about the foundational books you feel you must have. One of the first books I bought after the fire was the collected stories of Sherlock Holmes. I miss my wonderful old paperback boxed edition our neighbor gave me to make my recovery from that long-ago surgery easier, but it was a pleasure to reread Holmes and Watson’s adventures—for the first time in years. The next novel we replaced was And Then There Were None by Agatha Christie—one of the first adult mysteries I ever read, and a favorite of my teenage son (he loved the recent British television adaptation). I may not have replaced books by favorite authors (yet), but I have bought their new books that have come out since the fire.

And three of my fellow authors (Meg Gardiner, JT Ellison, and Laura Benedict) organized a book drive to have books sent to me. Fellow authors and readers sent their own (often signed), as well as their favorite books. It was overwhelming as Meg would bring over new packages of books every few days. Every book sent to me now has a story behind it: a story of care and hopefulness. This generosity gave me a new foundation for a new collection, and I’ll never forget this kindness during this very dark time for my family.

I already considered myself a steady user of our local library, but the fire turned me into a power user. The library has served as a research nexus for me (I kept writing on various projects, after all, after the fire, and interlibrary loan got me books and materials I badly needed), a place to work during this disruption in our lives, and a reminder of the importance of books in our daily lives.

A writer friend told me once that he is not very sentimental about books. I was, but I am less so now. I miss having my library. But its loss is nothing compared to the losses our family could have suffered. I’ll never have 2,500 books again, and I’m fine with that. 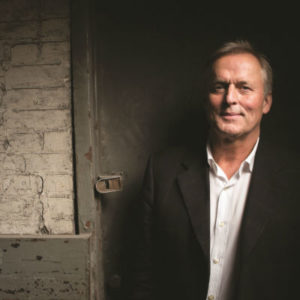 When you're John Grisham and your books have established one of the world's most popular and enduring genres, when you've...
© LitHub
Back to top