The Letters, Books, and Films of a Crime Legend

I have a confession to make, perhaps an embarrassing one. When Abby Westlake invited me to go through the working files of her late husband, crime writer Donald E. Westlake, in order to put together a collection of his nonfiction, I silently harbored hopes that I would learn the secret. Somewhere in there, I imagined, would be evidence of how he did it—how he learned so much seemingly real information about how the secret society of heisters he wrote about so well actually did their work in our world. Letters from anonymous criminal sources, prison interviews, or notes from clandestine interviews with hard men from the wrong side of the law.

How naïve I was. I didn’t find any of that. It turns out that Westlake really did make it all up. The secret meetings, the complicated communications methods, the identifying of jobs and buying of plans, the dealers in guns and fake documents: all of it—buttressed, I’m sure, by some regular old library research—came from Westlake’s head. It’s convincing because he was very good at his job. And his job was making things up.

What I did learn from those files was that writing, for someone like Westlake who spent more than half a century making the whole of his living from it, was very much a job, the writer essentially the single proprietor of a small business. Westlake mostly wrote novels, so there wasn’t a lot of evidence of the sort of hustling a freelancer has to do, pitching and following up. But there were files and files of correspondence about the background work that was required before he could sit down and hammer out the creative part: exchanges with agents about rights and reprints, with editors about titles, copy editors about corrections. Among the most telling was a letter he would photocopy regularly, merely changing the date, asking to be let out of jury duty because his labor was his sole source of income, and if he didn’t work, his family didn’t eat.

The most surprising discovery for me was just how much time—and how much of Westlake’s business—was tied up with film and television. I knew that a number of his books had been made into movies, but I had no idea how much back and forth there was about not just those projects, but countless others that never saw the light of day. Queries from his agent about possible adaptations (among the most intriguing being an inquiry about a Dawn Powell novel), contracts for spec scripts, sales and renewals of options on published work. And the vast majority of that work, so many of those contracts and payments and scripts, went for naught. In an interview with Albert Nussbaum in 1974, Westlake rattled off a list of ten of his books that had been optioned and turned into screenplays, with no resulting movie. I would call the process of getting a film made from a book Darwinian, except that there’s little sign that it’s the fittest who survive.

Among the projects that didn’t make it are a couple of extremely tantalizing might-have-beens. Westlake wrote a screenplay for Dashiell Hammett’s nihilistic masterpiece Red Harvest that was never produced. According to his friend Ethan Iverson, who discussed it with him, Westlake rewrote Hammett’s story considerably to fix what he saw as a major problem: that the mystery that brings the Continental Op into the action is solved about a third of the way in, leaving his continued involvement (and the subsequent Elizabethan tragedy–level body count) hard to justify. Given how much of an acknowledged influence Hammett was on Westlake, it’s a shame we never got to see his own take on the master’s bloodiest book.

Then there’s the failed James Bond screenplay. In 1995, producer Jeff Kleeman, a lifelong Westlake fan, invited him to write a screenplay for what was to be the eighteenth Bond film, The World Is Not Enough. Westlake jumped at the chance. . .but a long string of events, including pressure ensuing from the surprise success of the seventeenth Bond, Goldeneye, and concerns about scenes set in the growing market of China, led to its being scrapped. (But not before Westlake, needing to think of a way to destroy Hong Kong without a bomb, called renowned English architect Norman Foster to ask his advice.) In this case, Westlake was able to salvage something: he transformed his screenplay into a novel, Forever and a Death, which was published last summer, with an afterword by Kleeman that tells the story of the screenplay’s conception and demise.

Then there are the films of Westlake’s work that made it to the screen but probably shouldn’t have. There’s The Split (1968), from the novel of the same name, which starred Diahann Carroll and Jim Brown; of their complete lack of chemistry a friend of Westlake’s said, “Now we know the sound of two blocks of wood making love.” Another friend called Bank Shot (1974) “a farce shot in extreme close-up, so whenever someone slipped on a banana peel all you knew was that they’d left the frame”; critic Terence Rafferty simply said it was “absolutely dreadful.” And Jimmy the Kid (1982), a vehicle for child actor Gary Coleman at the height of his power, was so bad Westlake himself never bothered to watch it. (We won’t even talk about the deservedly short-lived “Love Boat on land” TV series Supertrain, which he co-created and wrote.)

That does leave us, however, with a number of true classics—and they’re satisfyingly varied in style and approach. The depictions of Westlake’s most lasting character, the taciturn heister Parker, are particularly striking as an example of the challenge of adaptation. Between Point Blank, in 1967, and Parker, in 2013, Parker (usually under other names) was played by Lee Marvin, Robert Duvall, Jim Brown, Mel Gibson, Jason Statham, and, strangest of all, Anna Karina. A friend of Westlake quipped, “I think the character lacks definition.” But while the variation may be extreme, the problem the adaptations were attempting to address is straightforward: How do you bring to the screen a character who not only is at least borderline sociopathic but also is known through his actions rather than his extremely rare words? In Point Blank, director John Boorman opted to let Lee Marvin carry the film with his sheer physicality, amplified by mod design and saturated southern California light. For The Outfit (1973), John Flynn added a sidekick, Joe Don Baker, and a love interest played by Karen Black, but he kept the tone of the movie tough; the result is a classic 1970s faux-realist crime film. Gibson’s Payback (1999), according to Westlake, “layered cutesy on top of earnest [and] came up with smarm.” Parker, meanwhile, simply softened its lead: Jason Statham is a powerful physical presence, but his Parker not only talks more than his novelistic counterpart—he talks about his code. . .of honor.

Anna Karina, meanwhile, only plays Parker in the loosest sense, in a film, Jean-Luc Godard’s Made in U.S.A., that is only based on a Westlake work in the loosest—yet, crucially, still legally actionable—sense. In 1965, French film producer Georges de Beauregard bought the film rights to Westlake’s sixth Parker novel, The Jugger. When he stopped making scheduled payments, Westlake and his agent assumed the project was off. The next year, however, a friend pointed Westlake to an interview in which Godard mentioned having just made a film based on the book. A lengthy lawsuit followed, and the film wasn’t shown in the United States for more than 40 years. When American audiences finally saw it for the first time in 2009, it turned out to be, well, a Godard film. (Which might have suited Westlake just fine: he regularly referred to The Jugger as his least favorite of his novels.)

Westlake worked in comedy as much as in hard-boiled fiction, and Parker’s comic counterpart, John Dortmunder, has his own serious fan base. But if Parker has had so-so luck on screen, Dortmunder—true, let’s be clear, to his own fatalistic form—has fared worse. Of the out-and-out turkeys noted above, two (Bank Shot and Jimmy the Kid) are Dortmunder stories. One, however, succeeded: The Hot Rock (1972) paired a screenplay by William Goldman—who, unusually, talked in depth with Westlake about the characters before setting out to write—with Robert Redford near his height and turned out a comedy that, as Roger Ebert put it, “is a long way from being the perfect caper movie, but bless it, has two or three scenes good enough for any caper movie ever made.”

Unexpectedly, however, it’s possible that Westlake’s most lasting contribution to cinema was one of his adaptations: his screenplay for Stephen Frears’s film of Jim Thompson’s The Grifters, for which he was nominated for a 1990 Academy Award. “I think what attracted me to Stephen,” wrote Westlake in 1999, “was that in a world of manic enthusiasm, here at last I’d met a fellow pessimist.” Frears, however, got him to sign on by emphasizing (relative) optimism. Westlake had decided to decline the job because he thought the story was too grim; it was only when Frears argued that the story belongs not to small-time con man Roy, who dies, but to his mother, Lily, who—ruthlessly—lives, that Westlake saw his way to writing it. The result, carried by great performances from Anjelica Huston, Annette Bening, and John Cusack, is one of the great noirs of modern Hollywood.

In the interview with Albert Nussbaum, Westlake said, “I subscribe basically to the theory that a movie is not the book it came from, and in almost every case it shouldn’t be the book it came from. . .The responsibility for a movie is not as easy to define as the responsibility for a novel.” None of the films that were made from Donald Westlake’s books are as pure Westlake as the originals. None is an adequate substitute. Yet they all—or at least all the good ones—carry his fingerprints. They’re tough and serious, yet wry about the world and suspicious of our belief that we can exert control over it, tightly plotted, and full of action. Westlake enjoyed quoting what Stephen Frears whispered to him at the opening night party for The Grifters: “Well, we got away with it.” What more can a crime fan want?

Levi Stahl is the editor of The Getaway Car: A Donald E. Westlake Nonfiction Miscellany and associate marketing director at the University of Chicago Press. He tweets, mostly about books, @levistahl.

Horror and Crime
Are Kissing Cousins 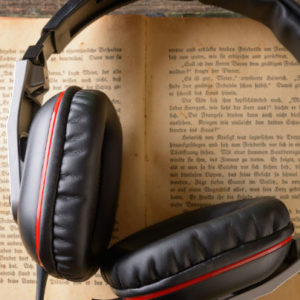 One of the great pleasures of reviewing audio books, apart from the obvious boon of free review copies for the addicted listener,...
© LitHub
Back to top