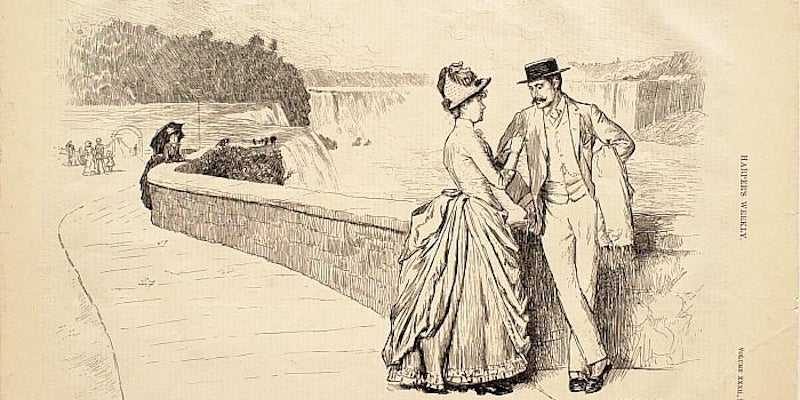 The answer lies in the Gilded Age heyday of the popular tourist spot.

One of the conundrums a mystery series author deals with before beginning every book is where to set the crime that engages the protagonist.  Does it take place in the familiar setting of the sleuth’s current place of residence? How many murders has the leading character already solved there? If he or she lives in a small town—think Jessica Fletcher of Cabot’s Cove, Maine—the reader begins to wonder why residents haven’t noticed that murders in their usually bucolic surroundings are as common as dandelions.

A large city such as New York, where Prudence MacKenzie and Geoffrey Hunter pursue some really nasty criminals in the Gilded Age Mysteries, of which DEATH AT THE FALLS is the seventh, can absorb a string of murders with barely noticeable concern. They happen all the time; violent crime is as much a part of living in a metropolitan area as access to world renowned museums, theatres, operas, parks, and newspapers. But every now and then, just as in real life, a fictional character needs a vacation. So does the author.

In DEATH BRINGS A SHADOW (Gilded Age Mystery #4), Prudence and Geoffrey went to a sea island off the coast of Georgia to celebrate a friend’s wedding. Why? The setting allowed for an exploration of life in the South some twenty-four years after the end of the Civil War. It took us from the cobblestone streets, burgeoning wealth, and immigrant population of a major American city to a landscape of isolation, natural dangers, and obsession with the past. For a writer of historical fiction, it was a research feast.

So when I read about the fascination of nineteenth century tourists with Niagara Falls and the daredevils who walked tightropes across the river, plunged into rapids, and designed barrel-shaped containers in which they intended to propel themselves over the Falls, I knew it was time to take Prudence and Geoffrey on another journey out of the world of Gilded Age high society. I visualized a barrel hurtling through a curtain of raging waters, a death-defying splashdown in swirling whirlpools, a crowd gathered to marvel or cringe at what would be found inside the cask when the lid was pried off. Spoiler alert!

Niagara Falls in the autumn of 1891 was not the Niagara Falls of today. The most popular guidebook of the period, the one Prudence purchased and read on the train ride up from New York City, was written by David Young in 1884. The Humbugs of Niagara Falls Exposed. With A Complete Tourists’ Guide, Giving Hints That Will Enable the Visitor to Avoid Imposition. It doesn’t include photographs of the town and sights of Niagara, but a quick Google search brings up dozens of contemporary sketches, paintings, and photos. Careful! The protagonists of DEATH AT THE FALLS didn’t have access to images produced after 1891. However intriguing, they had to be deleted from the pics folders for the work in progress.

It was important to forget the Niagara Falls I experienced when I visited there—except for the crashing boom of the water, the feeling of being saturated by droplets of moisture hanging in the air, the pull of danger that makes one lean out almost a little too far, as if to imitate the reckless adventurers of the past.

The manmade structures of Niagara have changed enormously since the 1890s, but the Falls themselves have remained as awe-inspiring as when Father Louis Hennepin first saw them in December of 1678. “The Waters which fall from this horrible Precipice, do foam and boyl after the most hideous manner imaginable, making an outrageous Noise, more terrible than that of Thunder; for when the Wind blows out of the South, their dismal roaring may be heard more than Fifteen Leagues off.” (A New Discovery of a Vast Country in America. French publication in 1697. English translation and publication in 1698.)

Once you’ve trained yourself to let go of the present, it’s bewitching to sink into a bygone era. There’s nothing you can do to change it. It may not be a comfortable place to linger too long, but the past is a known quantity, which makes it safe for the writer, if not for the characters with whom she peoples her not-so-imaginary world.

In the case of Niagara Falls and David Young’s 1884 guidebook, the casual tourist is warned from the beginning that he is considered prey by the hackmen, hotels, and enterprising custodians of the area’s most famous sights and landmarks. Young offers a table of going rates charged to view the various whirlpools, for example, noting that fifty percent of the fee is returned to the hack driver who brought the newcomer to the scene. He then informs the reader that the driver gets a cut from just about every souvenir sold at the Falls and every meal his passengers eat at the restaurant the hackman recommends and to which he delivers them. Ever the tourists’ champion, Young offers suggestions for avoiding excessive fees and prolonged rides to points of interest the hapless tourist has never heard of and had no intention of visiting when he originally planned his trip.

Prudence MacKenzie and Geoffrey Hunter are too savvy to be taken in by these practices and outright scams but paging through The Humbugs catapults the reader into the novel’s setting nearly as effectively as if he’d entered a time travel machine. An attentive reader can almost hear the clop of horses’ hooves on unpaved roads and the chatter of other tourists eager to see the fabled Falls, always the last stop on a long drive that ends up costing much more than initially bargained for. We’re warned against souvenirs imported from England that are sold as local artifacts, always priced many times their worth. Knickknacks from China, anyone? The reputed experience of an obviously fictitious visitor is pure vaudeville, rendered in mock German dialect, and a reminder that what we would find offensive today was once sought after and highly appreciated entertainment.

The Humbugs is not all dire warnings. The section entitled “How to See Niagara Falls” offers as workmanlike and detailed a description of what the average tourist needs to know as any modern-day guidebook. It’s also reassuring to be advised that despite the presence of scoundrels and humbugs, it is possible to spend one’s money wisely and leave Niagara Falls with happy memories of a well-enjoyed outing. There’s a list of attractions to check off, a summary of railway systems and stations, and a compendium of admission fees and tolls that haven’t been inflated by kickbacks. Both the American and the Canadian sides of the Falls are included. I found myself nodding in agreement and reaching for a pencil with which to jot down attractions I wanted to visit, as well as tips on how to negotiate with the infamously rapacious hackmen. I could have a photo portrait made at a studio on Cherry Street, stay at any of several hotels advertising on the last few pages of the guidebook, have a tooth pulled or purchase a bottle of wine from a family grocery store. All advertisers vouched for.

I read newspaper accounts of official events at the Falls, letters and diaries penned by visitors, contemporary and modern histories of the area and its development. Nothing quite captivated me as completely as David Young’s popular guidebook. It proved once again that the best source material is authentic, written in the language and with the social prejudices of the era, and so fascinatingly of its day that even for an experienced writer of historical fiction, the present faded away like so much morning fog. 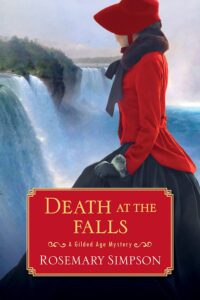 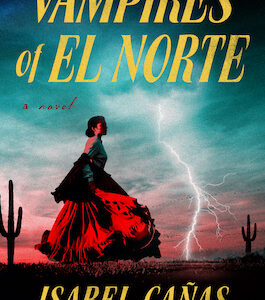 Nena Octubre 1837 It was often said that a strange kind of magic ran in the water of Rancho Los Ojuelos, the kind that...
© LitHub
Back to top