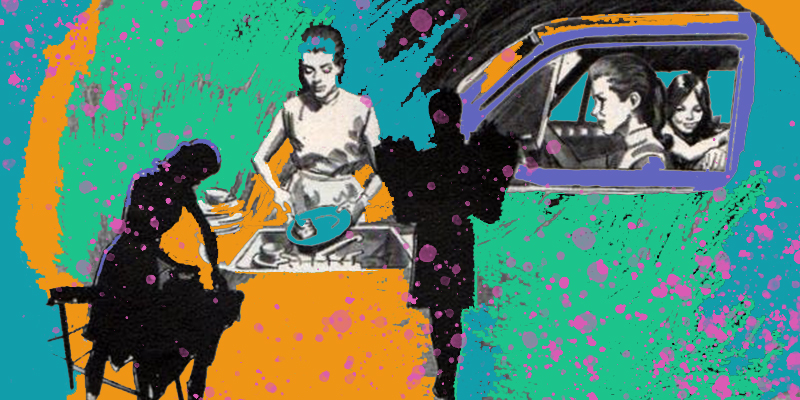 On the ad industry, domestic suspense, and the need for a safe space for imperfection.

Are thrillers a safe space for the imperfect woman?

It might seem odd to talk about thrillers being a safe space for any woman, given how often we end up scared or even dead on their pages. But, what the thriller writer has long known, is that the scariest place for any woman is often inside her own head, as she battles her public and private face. Thrillers have been giving voice to these imperfections for decades now, showing us women in all our messy, complex glory and, in the same way, perhaps offering us a place of refuge.

The drive to perfection is really a marketing tool, designed to sell us more stuff. As Don Draper famously said, ‘I don’t work in advertising. I shape society’s collective consciousness.’ Mad Men depicted the golden age of advertising in the 60s and 70s, which gave birth to the idea of the perfect life, with the perfect woman right at the center. This woman was supposed to look good, cook well, keep a spotless house, nurture her family and organize wholesome activities, all of which naturally required buying lots and lots of products. It must have seemed like a simple plan to the Don Drapers of the world, in their fancy offices filled with interesting people, but what they forgot was that the women they left every day in these perfect houses also had brains and that these brains were in danger of exploding with boredom.

It was thriller writers who articulated this disparity most clearly with their chilling documentation of the period from about the 50s to the 90s, when the predominant view of women in society was one created by men to sell products. The thriller writers of these times looked beyond the image to the reality of life for these women, highlighting what this denying of their imperfections was doing to them. The home became the scariest setting for these stories, domestic duties the most dangerous, families the hardest relationships to navigate.

The most famous of all these domestic thrillers is probably Ira Levin’s The Stepford Wives, an idea which has seeped in to our consciousness to become an actual descriptor of a state. This slim masterpiece is told from the viewpoint of Joanna Eberhart, newly moved to Stepford and trying to make friends, but met by a barrage of women only interested in domesticity. More than once she describes these women as existing in a TV commercial, but when her one ally, Bobbie, succumbs to being a ‘housefrau’ she begins investigating properly. She finds out that the women of Stepford used to be political, even inviting Betty Friedan to speak. She also finds out that their husbands are all involved in animatronics in some way, so she becomes convinced that they have replaced their wives with robots, a fate which she is sure awaits her. Levin is clearly making a point that a woman’s worth in 70s America had been reduced to nothing more than her looks and her domestic duties, a state unsustainable for any living human.

This idea of commoditizing women runs through so many thrillers. Margaret Atwood’s The Handmaid’s Tale (and let’s not debate what genre this book sits in as it crosses so many, but definitely one is thriller) takes this idea and shows us a world where women are only valued by three attributes: reproduction, mothering and housework, none of which are done by the same woman. Each ‘Commander’ needs at least three women to fulfill his needs; to achieve this, Gilead operates as a prison state. In much the same way, the need to consume and be perfect imprisoned the advertised-to woman.

Like the women of Stepford, Offred is barely considered human; women in thrillers often have their feelings ignored or belittled, a by-product of viewing them as commodities. Men treat women badly in most thrillers, totally disregarding or manipulating their feelings. One of the most extreme examples of this is Helen Weinzweig’s Basic Black with Pearls, which tells the story of Shirley, who has been following her slippery lover, Coenraad, around the world for years, their meetings organized by strange notes left in National Geographics, their assignations degrading and unsatisfying. Finally he leads her to Toronto and her childhood home, where she replaces the black dress he insists on with colorful silks and embraces her immigrant heritage, so freeing herself from an idea of who she thought she was meant to be, in to the woman she actually is.

Shirley finds her freedom, but what thriller writers have long realized is that, if women are commodities, then we are also disposable. Adverts are designed to get us to constantly replace old items, which not only created the cult of youth and beauty, but also the idea that women are interchangeable. This idea gained traction in thrillers, with husbands and lovers often the villains of the piece, gaslighting or even killing women, and backed by the sinister idea that society listens to men so much more than women. Celia Fremlin’s The Jealous One brilliantly explores this idea by telling the story of Rosamond, who becomes convinced that her husband is falling in love with their exciting new neighbor, Lindy. Lindy hates any woman who isn’t completely subservient to a man, whilst Rosamond is bored by domesticity and, as the story develops and more people comment on their similarities, I think it is fair to wonder if Lindy and Rosamond are two sides of the same person, fighting against the conflicting parts of themselves to be the perfect wife, happiness only achieved when one of them is banished.

The Bird’s Nest by Shirley Jackson also tackles the idea that so much is expected of women it takes more than one woman to be the perfect woman. Elizabeth Richmond is trying her best to be a good girl, but the pressure is too much and, as she fails to sleep, two, three, then four different personalities emerge, all trying to please the odious psychologist hired to treat her. Jackson was obsessed with the idea of the mad woman in all her writing, most famously Merricat in We Have Always Lived in the Castle, who may or may not have murdered her parents, and may or may not have a had a good reason for doing so. But what Jackson is showing us is a world in which the sanest option for some women was madness, as only then could they be themselves in a society which required too much pretension from them.

Patricia Highsmith also devoted much of her writing to depicting women battling with these dual sides of themselves, often at the expense of their own sanity. In Edith’s Diary, Edith lies as much to herself as anyone else about the real state of her son’s life, with terrible personal consequences. And sometimes death is the only means of escape for the women in Highsmith’s stories, either metaphorically like Alicia in A Suspension of Mercy, or literally like Melinda in Deep Water because, when women stop playing the part of the perfect wife, then they have no place in the world of polite society.

The best thrillers ask us to re-assess who we are and, for women, this question has become more and more complex.

I don’t think it is any co-incidence that so many of these thrillers take place inside a house because the writers recognized that advertised domesticity had become a nightmare for most women. The domestic thriller has always been popular because it speaks so eloquently to this idea of entrapment within caring roles which are often deeply unfulfilling. There have been many novels written about the perils of this state, but two of my favorites are Mary Higgins Clark’s Where are the Children and Celia Fremlin’s The Hours Before Dawn. Both novels depict women in states of despair about their children through lack of sleep or worry, both lose their children, both think someone has taken them. But what both novels capture so brilliantly is the double fear that most mothers experience between something happening to the people they love most in the world and something happening to themselves as they become eroded by domesticity. Both novels have hair-raising final scenes inside houses, as the women chase their children’s abductor which, for me, becomes a metaphor for the complexities of their minds and what they really want out of life.

The idea that women can be all things to all people is of course based on a lie: the lie that perfection is achievable. But advertisers need us to think this is possible and desirable in order to sell us the products that will make it possible. Women who step outside of these desires have long been portrayed as mad or unnatural, an idea that has always been very potent for the thriller writer. Beast in View by Margaret Miller is a shocking portrayal of what happens to a woman who steps outside conventionality, as a wealthy heiress is lured in to a sordid web of blackmail and pornography by a mysterious voice on the telephone, which could be read as her own subconscious desires. However, perhaps the most shocking portrayal of a woman chasing her true desires, is in Susanna Moore’s In the Cut, in which a young tutor allows her sexual desires to lead her to a place of complete destruction. Men might want women to be sexy in these novels, but they will also punish and degrade them for their desires and society will turn a blind-eye.

The best thrillers ask us to re-assess who we are and, for women, this question has become more and more complex. What is undeniably scary though is that the questions that these writers were asking decades and decades ago are still depressingly relevant today. Women still are expected to conform in a way that men simply are not and transgression from this is still a frightening and dangerous place to find oneself. Yes, the Harvey Weinsteins have been removed, but the insidious pressure of perfection piled on top of us still threatens to bury us alive. These thrillers, some written sixty or seventy years ago, feel modern and relevant because the questions they asked still haven’t been answered. We are writing the same stories now, because women are still preoccupied with the same problems of how to be our authentic selves in a world which pushes us to conform to nonsensical ideals of femininity.

Thrillers continue to give a voice to women who don’t want to have to live in this narrow fashion, or who finds the constraints of perfection terrifying. For me, then, the thriller is a safe place for women because it allows us to see other women struggling against the different versions of themselves. As one of the protagonists of my latest novel, Imperfect Women, says right at the end of the book, after having to come to terms with not just who she is but why this never-ending struggle killed her best friend, ‘for the first time in my life I don’t feel like I have to make it right. I don’t mind being imperfect.’ 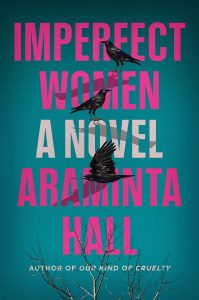 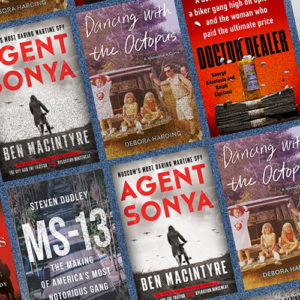