The Maltese Falcon may be thought of as a novel by Dashiell Hammett published in 1930 or as a trio of film adaptations produced between 1931 and 1941 (the middle of the three being a comedic mess renamed “Satan Met a Lady” and the last being the John Huston/Humphrey Bogart classic). Additionally, the Maltese Falcon may be thought of as the statuette itself—an objet d’art of legendary repute and incalculable financial value. Or the Maltese Falcon may be regarded in terms of the narrative purpose it serves in the story; that is, to use a term popularized by Alfred Hitchcock to stand for any object that entices characters and drives plot, a “MacGuffin.” Unattainable, perhaps, but irresistible. A great part of the enduring appeal of the Maltese Falcon is the ineffable quality these varied references suggest. For this reason, I demur when it comes to grounding the Falcon with any one definition, volunteering instead only to share here what the Maltese Falcon has come to mean to me and what I suspect it may represent for many other authors as well, even if they have never given a single thought to the mythical black bird.

Some years ago, I came across a quote from Dashiell Hammett in a 1934 edition of the New York Evening Journal that changed the direction of my own writing. “All of my characters are real,” Hammett said. “They are based directly on people I knew or came across.” This suggested a question: might Hammett have based Sam Spade’s famous adventure on real people and a real statuette? The more I researched Hammett’s life—his work as a P.I., his rise to fame as an author, his subsequent, decades long writer’s block, his courageous stand against the Red Scare of the 1950’s—the more fascinated I became both with Hammett and the imaginative possibility that his life may have been entwined for many years with an “actual” black bird statuette that had served as the model for his fictitious one. This fascination formed the core of my decades-spanning novel Hammett Unwritten, published by Seventh Street Books in 2013 under the pseudonym Owen Fitzstephen (a pen name derived for irresistible, narrative-related reasons). Now, Fitzstephen is back with a new exploration of the Falcon-inspired, real-life-Hammett-grounded world. Set at the time of the original case, The Big Man’s Daughter revisits some of the haunts of the first book but this time from the point of view of Rita Gaspereaux, the 18 year-old daughter of the criminal mastermind known in the rackets as “the Big Man.” Contrary to Rita’s plans, she finds herself the inheritor of the burden of seeking after the Falcon. Darkness and violence ensue. Wonders too. The Thrilling Detective Website calls the book a “carefully assembled and psychologically sharp read that tears into the guts of what it’s like to be young, scared and not sure where you’re going. Or where exactly you’ve been. If you’re a Hammett fan, you’re going to love this.”

And then the new novel is over, as all novels end (excepting perhaps Finnegan’s Wake). And it is in contemplating the completion of this latest book, or of anyone completing any book, that I find myself considering the Maltese Falcon statuette as it relates to the act of authorship. I wonder: what is the object of mythical value we writers hope to attain when we begin writing a book? What pulls us into such capers? What sort of jeweled bird of a story are we after?

Whatever our finished books prove to be in the end, they are different than we initially envisioned.

The black bird is many things, but it is not what we originally sought.

Our dedication to the quasi-mythical object (our novel-in-progress), the loneliness and discipline of the work, the darkness visited upon the writer in quiet moments of doubt, and the wonders that arise unpredictably, move us daily from the world we share with family and friends into our writing chairs. Our fingers flash on the keyboard. Or sometimes they don’t flash; sometimes, they don’t even move, but we sit still and silent. Either way, we’re on the case, following unexpected developments that may propel us forward or threaten the endeavor altogether. Shocking revelations, fatal missteps… Hence, an author is akin to a character engaged in the slow moving meta-plot of writing his or her own book, enticed and driven by a “MacGuffin”—the idealized book itself.

Eventually, we type the words “The End.”

It is never quite as we envisioned. Even if we “know the ending” of our book from the outset and discover that the final pages indeed turn out much as planned, the nuances of the story and characters that we spent so many hours constructing will prove to have altered the context of the ending, making it inevitably different from what we first imagined. And so, when our work is complete, no mere ideal but hundreds of manuscript pages finally going to press, it is not uncommon to wonder, “What story is this and where did it come from?” Sometimes there is an answer of great personal import to such questions. In happy instances, the finished product exceeds in quality the original concept. A fine result but irrelevant to the fact that the finished book no longer belongs to the author. It is its own entity, to be adopted by readers who make it theirs for a short time before moving on.

What we worked so hard and long to possess has taken flight.

Make no mistake. It remains a fine thing to hold in your hands your own published novel; a fine thing, but not altogether dissimilar to Humphrey Bogart holding the much sought-after falcon statuette at the end of Huston’s film. Counterfeit? Who’s to say? When asked by a police detective what the statuette is, Bogart answers, “The stuff that dreams are made of.”

The stuff that books are made of too.

So, what to write next? 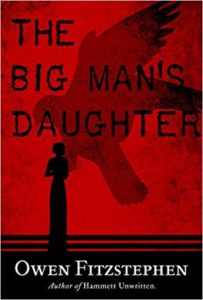 Gordon McAlpine is the author of Holmes Entangled as well as Woman with a Blue Pencil and Hammett Unwritten and numerous other novels, as well as a middle-grade trilogy, The Misadventures of Edgar and Allan Poe. He has taught creative writing and literature at U.C. Irvine, U.C.L.A., and Chapman University. He lives with his wife Julie in Southern California. 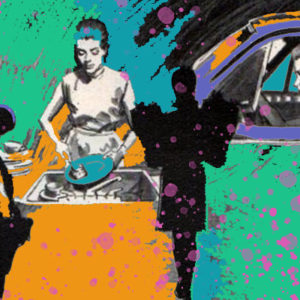