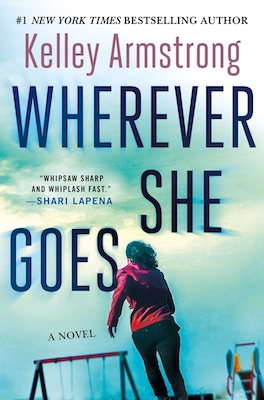 The following is an exclusive excerpt from Wherever She Goes, the latest psychological thriller from Kelley Armstrong, in which a woman witnesses the kidnapping of a child at the park. Aubrey reports the crime, but since she's the only one to bring the incident to the attention of the police, they don’t believe her. Left with only one option, she takes the case into her own hands.

It’s six o’clock Thursday evening. I’ve been out for a couple of hours, getting groceries after replacing the fan belt in my car. It  doesn’t take me that long to shop for myself, but before I go, I always check on a few less-mobile neighbors to “see if they need anything from the store.”

In truth, I didn’t need anything myself today. I was conducting a test. If I go out in public, will anyone recognize me? While I caught a few looks, no one said anything, and I suspect I was just being paranoid about those looks. I will presume that if anyone saw me on the news this morning, they didn’t recognize me. Given how I looked in that video, I’d hope they wouldn’t recognize me.

I return to my building, drop off bags for my neighbors, and bask in a few moments of Zen calm. There’s been no fallout from the video clip, and now I have done good deeds. I have made people smile. I feel good about myself.

Then I climb the stairs to my floor and hear someone banging at a door. I pause, groceries in hand, and I consider withdrawing.

Because I hear someone knocking at a door? It’s probably not even mine.

I glance around the corner to see someone standing in front of my door, hand rising to knock again.

I pull back and ponder sneaking down the stairs, tossing the groceries in my car, and going for coffee. Wait it out.

That would be cowardly. Also, pointless. If Paul wants to talk to me, he’s going to find a way, even if it involves skywriting “Pick up the damned phone, Bree.”

I step from the stairwell. He turns, and I expect he’ll wait there, not saying a word until we’re safely ensconced in the privacy of my apartment.

Instead, he bears down on me, and on his face there’s an expression I don’t think I’ve ever seen. Barely contained rage.

“What the hell is this?” He waves around the hall. “I didn’t even have to ring up. There’s no damned lock on the front door.”

And has been since I moved in.

“This place reeks of pot,” he says.

I stare at him. “Are you accusing me of smoking pot, Paul?”

He knows about the news clip.

I fix him with a level stare. “You know I don’t drink. I certainly don’t do drugs. If you are accusing me of that, I will take a test. Just say the word.”

“I’m not accusing you of anything, Aubrey. I’m saying people here are smoking pot.”

I sputter a laugh. “If you think you can find any building—uptown or downtown—that doesn’t have at least one resident smoking pot, you need a reality check, Counselor.”

“Don’t—” He bites it off and advances on me, voice lowering. “This is about embarrassing me, isn’t it? I keep offering you money, but you’ve made it clear that you’re fine. And then I see this.”

I pass him to open my door. I step inside and hold it open.

“My apartment isn’t fancy—” I begin.

I was conducting a test. If I go out in public, will anyone recognize me?

“The fact that you can even say that proves you need to get out of midtown Chicago a little more often. Go see how people live when they aren’t born with an Ivy League education fund. This isn’t skid row. It’s working-class America, and I’m fine with it, and I think it’s fine for our daughter to see a little bit of it, too. Broaden her horizons.”

“My daughter’s horizons don’t include walking past that junkie parked on the front step.”

I wheel on him. “That is a military veteran who lost his damned leg. Show a little respect.”

He steps back. Rubs his hands over his face. “All right. I’m sorry. That was uncalled for. But I don’t understand what you’re doing here, Aubrey.”

“Not trying to embarrass you or punish you.”

“Punish yourself, then.” He meets my gaze. “That’s it. This is about punishing yourself. You had an affair, didn’t you?”

He walks into the apartment, still talking, his back to me. “That was the first thing I thought when you left. You’d met someone. I expected you’d wait a few weeks after leaving and then drop the bomb. When you didn’t, I thought that must not be the answer. But it was, wasn’t it? Not that you left me for another man. That you met someone and had an affair. A fling. Then you left out of guilt, and now you won’t take anything from me because you’re punishing yourself.”

I laugh. I can’t help it. The sound startles him, and he turns.

“Seriously, Paul? I was home with a toddler. How the hell would I find time to meet someone, let alone have an affair?” I walk into the kitchen. “Now, if you’d like coffee—”

I stop. Then I turn to face him. “I’m sorry. I should have warned you. If this causes you any embarrassment—”

“Christ, Bree. No. I’m worried about you. You saw something in the park.”

“I didn’t see ‘something.’ I saw a boy get taken. Kidnapped.”

“Putting aside what you think you saw—”

“What I think I saw? A boy was taken, and now his mother is dead, and the police are ignoring me.”

He goes quiet. Then he says, carefully, “I know you wanted more children—”

He runs a hand through his hair. “You said that had nothing to do with you leaving, but you left shortly after I told you I wanted to wait.”

“What does this have to do with me seeing a child abducted?”

“You want more kids, so when you thought you saw a child in danger—”

“You think I’m hallucinating a kidnapped kid because, what? I feel like my future babies have been stolen from me? That is the most messed-up amateur psychobabble I have ever heard.”

“You know what help sounds like, Paul? ‘Aubrey, I saw that clip on the news, and I can’t believe the police are brushing you off. Let me see what I can do—I have contacts in the department.’”

He opens his mouth.

“No,” I say. “Those aren’t the words coming out of your mouth, so I don’t want to hear the ones that are. Get out.”

“And I don’t give a damn. You want to know the real reason why I don’t take money from you? Because paying for this place means it’s mine. All mine. So if I tell you to get your ass out, you are going to turn around and do it. Now.”

He hesitates. Then he stalks out, the door slapping shut behind him.

Now I’m angry. No, I am furious, in a way I haven’t been for years. A way I haven’t allowed myself to be. At last, I have a target for my bottled-up rage.

He didn’t give me hell for being on the news. Didn’t storm over here to accuse me of publicly humiliating him. I think that might be better. Then I could have snarled back that this wasn’t about him.

What he did is worse. It’s condescending crap. It’s Paul thinking his wife has lost her mind. Poor, poor Aubrey. She’s hallucinating missing children because she’s sad that she doesn’t have another baby yet.

Screw you, Paul. I saw a boy kidnapped. Any doubt I had evaporated the moment I saw his mother’s photo. That is the woman. He was the boy. He was taken.

And I’m going to prove it.

From WHEREVER SHE GOES. Used with the permission of the publisher, Minotaur. Copyright © 2019 by Kelley Armstrong.

A Brief History of the Heroes of Black Pulp 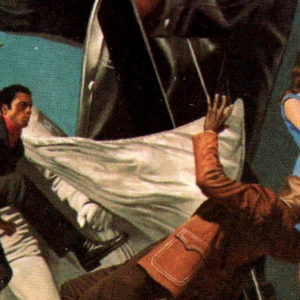 A Brief History of the Heroes of Black Pulp As a child of the 1970s I was surrounded by pulp heroes that included my beloved James Bond films, Batman reruns and The Shadow...
© LitHub
Back to top