Do you feel more like Hungarian student radicals or deep-cover hostile-country spies?

We’ve got a few big spring weekends coming up and while maybe you want to watch The Little Drummer Girl for the third or fourth time, hoping that this go around it might actually be good, that Michael Shannon won’t undermine the whole thing with his bizarre choices, that in this viewing it’s just going to be Pugh and Skarsgard on a cross-European iridescent spy romp, but no, it won’t be, it can’t be. So we need some new shows. Here we go. (Or if you don’t want new shows, you want the old, the good, and the le Carré, opt for The Night Manager instead; that one really holds up.)

Here’s a worthwhile new series about 1980s espionage (sort of), for those still mourning the end of The Americans. Set in 1985 Budapest, we follow a young chess enthusiast off to university, where presumably he’ll hit the library, some parties, and a few chess matches, but oh, then it turns out he’s mixing himself up in radical student politics, and there’s a very good reason for it: he’s an agent of the secret police, sent to infiltrate and inform. The atmosphere is thick with politics, betrayal, and shifting allegiances.

This one is pretty new, so excuse yourself if you were unaware, but AMC+ is airing an honest-to-God spaghetti western. A dark-hearted, sun-bleached western starring Dominic Cooper and Niv Sultan (see Tehran, below), among others, created by Mauro Aragoni and filmed in Italy, Spain, and Morocco. This is a cinematic tradition we need to get behind, and the first episodes show quite a lot of promise, assuming you’re into nihilistic tales of feuding outlaws, set against unforgiving landscapes and relentless sun.

If you haven’t tried Tehran already, here’s the case for it: an international spy thriller about a Tehran-born Mossad operative sent back into the lion’s den on a highly classified, soon-to-be blown operation, and now she has to get out. And it’s from the creator of global sensation, Fauda. And in season 2, for some rather mysterious reasons (do we really need a reason?), Glen Close joins the cast as the new handler. Imagine if every reasonably successful international thriller just got a shot of Glenn Close in its second season.

Hold Tight continues an impressive run of Harlan Coben adaptations interpreted through production teams in different countries around the world, mostly across Europe. In this one, a woman’s son goes missing after his friend dies, and she suspects he’s mixed up in something dark. Set in a seemingly idyllic suburb of Warsaw, you can pretty well expect that that idyll is going to be shattered. This is a limited series, but if you were inclined you could pair it with any number of high-quality Coben adaptations and have yourself quite a nice weekend, assuming you’re not too squeamish about kids going missing. (No shade if you are; personally I can’t do kids in peril content.)

Well, it’s a big-budget ocean-crossing thriller based on a successful Israel series (False Flag), but is it particularly good? Well, no, but Uma Thurman is in it, so that might well be reason enough to dedicate some portion of your weekend to it. It’s a pretty interesting scenario, too: five British nationals, seemingly unconnected, arrested on suspicion of orchestrating the kidnapping of a media scion in New York. They say they’re being framed. Part Agatha Christie, part Eric Ambler – if only it had half the smarts of either. 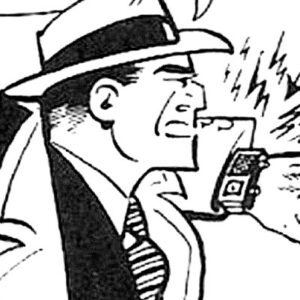 Who could have known that newspaper comic strips and crime stories, including noir, were a match made in heaven? Newspaper...
© LitHub
Back to top