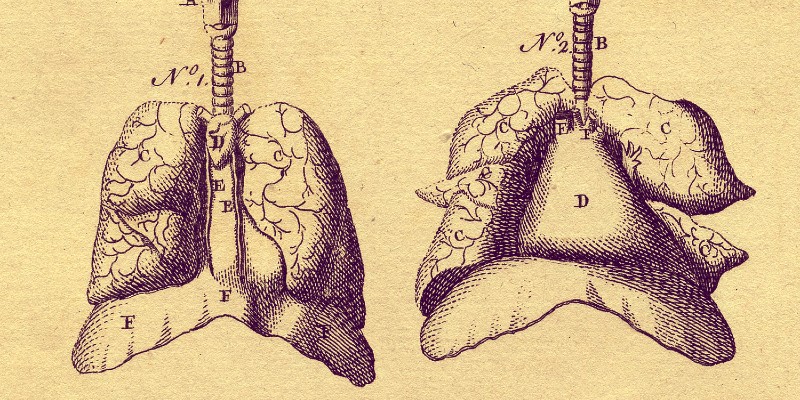 Parnell Hall on chasing life—and publishing the book that had been with him for over a decade.

About ten to fifteen years ago I wrote a standalone thriller. At the time I had only written series characters, like the Stanley Hastings private eye novels and the Puzzle Lady crossword puzzle mysteries, so I was particularly fond of my thriller. It was like sitting at the grownups table.

I also loved the characters: Bitsy, a ten-year autistic girl, around whom much of the plot revolved; Murphy, a washed up cop whose cancer has advanced to the point that he has to stop drinking, and it gradually dawns on him that some of the cases he was blamed for screwing up were actually ones where the other cops set him up to take the fall; and a mismatched pair of mob hit men who look like they just stepped off a Broadway stage, which is where the climax of the novel actually takes place.

The book was called Stand Alone Thriller, which is also the title of the Broadway play that is opening, which is about a failed writer trying to write a standalone thriller to get back in the game.

I thought that was pretty clever, and I was sure New York editors would line up to publish Stand Alone Thriller.

New York editors did not agree.

Flash forward to 2015. Two seemingly unrelated events took place. I got an email while on tour climbing volcanos in Central America. I had stayed behind sick that day, which might have given me a hint about the other thing. Anyway, this email came in on my gmail account, which I never use, and I nearly deleted it as spam before I saw the name Putnam.

It was from Sara Minnich, a senior editor from Putnam who gave no other indication that she had taken leave of her senses except that she wanted me to co-write a novel with best-selling author Stuart Woods for more money than I’d ever seen in my life. The fact I’d never read a Stuart Woods book notwithstanding, I said, “Yes, I think I’d like to do that.”

The other seemingly unrelated event was on my annual checkup, my doctor found a spot on my lung x-ray and sent me to a pulmonologist, who put me on Prednisone and sent me for CT scans.

In August of 2016 my first Teddy Fay thriller co-written with Stuart Woods came out and hit number 8 on the New York Times bestseller list. I was in the hospital for a lung biopsy at the time.

Over the next four years Stuart and I co-wrote four more thrillers, all bestsellers, and my lungs continued to get worse.

My only hope was a lung transplant.

My chances were not good because I was about to turn seventy five, which is pretty much the cutoff line. My pulmonologist wrote a letter to the transplant team arguing that since I was physically fit in every other aspect I was a perfect candidate.

So they started me in on all the medical hoops you have to jump through to get on the transplant list (which struck me as a little bit cruel). When they saw how well I was doing they fast-tracked me. By the end of 2019 I had passed all the tests I needed to get on the transplant list. There were some drugs that needed to be switched because they conflicted with some of the anti-rejection drugs I would be taking, but that could be cleared up in a couple of weeks and I’d be good to go.

Of course I was signing on for a dangerous life or death operation, but I really had no choice.

To pass the time while I was waiting, I decided to self-publish my standalone thriller on Kindle. I had made substantial changes to it using what I had learned about thrillers from Sara Minnich, and I wanted to see it in print before I died. I wrote to my friend Lee Goldberg, an author and publisher, and asked him the best way to go about it.

I sent him my thriller as an attached file.

Three days (yes, three days) later I got back a fully edited manuscript that Lee and his business partner Joel Goldman had gone over. They wanted a few important points taken care of, but if I had no objection they offered to publish it on their Brash Books imprint.

I could see right away the points would help the book. I said I’d get right on them.

I finished the rewrite, handed it in, got put on the transplant list and got called the next day.

January 15th I went to the hospital. I wasn’t worried, because I was told I was only there as the backup patient in case the real patient for some reason wasn’t a match for the donor lung, but that wasn’t likely to happen. 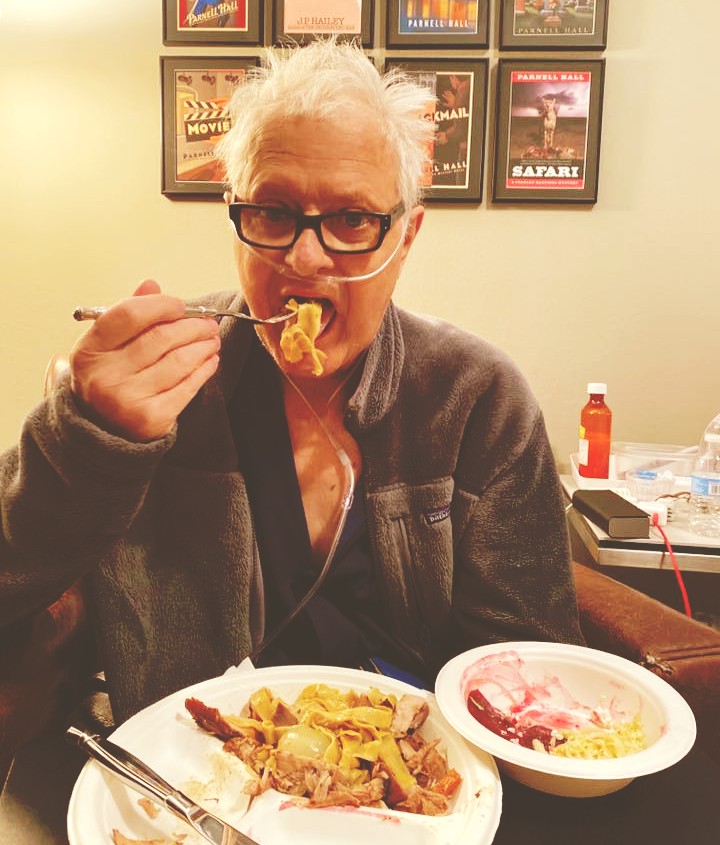 The author, his first day home from the hospital following a lung transplant.

I woke up days later in the ICU with a new lung. It turned out the donor had two, and the other patient only needed one.

Needless to say, I was somewhat disoriented. I was even more so when my wife showed up with the copyedited manuscript. I did the copyedit flat on my back with my wife Lynn reading me passages, and then me trying to relate them to what I remembered about the book.

I had many serious complications and didn’t get out of the hospital for three and a half months.

At times I was lucid enough to email Lee on my iPad.

At other times I would have setbacks and not be able to think straight or even raise my head.

One thing I learned was that no one was happy with the title, Stand Alone Thriller, but no one could come up with anything better. I certainly couldn’t.

At some point during all that, Lee had to have a title for the manuscript so he could create a cover and send out the galleys for review, so he dubbed it Chasing Jack.

Which is how, without knowing it, I came to write Chasing Jack. 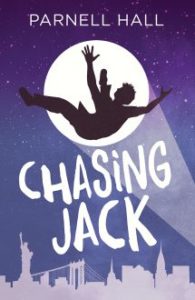 Parnell Hall is the author of the Puzzle Lady crossword puzzle mysteries, the Stanley Hastings private eye novels, and the Steve Winslow courtroom dramas. With Stuart Woods, he is the co-author of the New York Times bestselling Teddy Fay series. His latest Puzzle Lady book is The Purloined Puzzle. His novel, Chasing Jack, is now available from Brash Books.
http://parnellhall.com 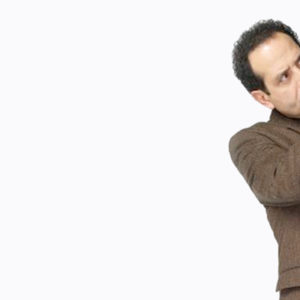 Doing what one does naturally in 2020—that is, washing one’s hands, bingeing, and overthinking the dystopian parallels...
© LitHub
Back to top