Why Are We So Fascinated by Houses in Literature?

On the profoundly disturbing notion that home is not safe, and we are prisoners within our own walls.

When I think about the books I hold most dear, whose magic never dims and whose colors never fade, almost all of them feature a house that rises up out of the narrative like a larger-than-life character in its own right.

A book without a vivid setting is, for me, a little bit insubstantial and unsatisfactory. There’s something slightly wooden and contrived about it, so that I can never quite suspend my disbelief. What I really want is to be lost in another person’s life—so absorbed and transported to a living, breathing world that when I look up from the page it takes me a moment to remember where I am—at home reading a book.

Many of literature’s most memorable settings are built around a house. It’s as if putting walls up around the narrative keeps it from leaking out into something more diluted and amorphous. Our homes in normal life are our sanctuaries; we already know the world outside is a scary place. So when the notion of home is turned on its head—when the threat suddenly comes from within—it can be profoundly disturbing. And now, with pandemic-induced lockdowns the world over forcing us to stay at home, a whole new gothic trope has been born… For me personally, I love a literary house with a long memory, packed to the rafters with dark secrets reaching back through generations. We all know the adage ‘if walls could talk’. Well, sometimes—if the writer helps the reader tune in to the right frequency—they do, and the result is seriously creepy.

I love a literary house with a long memory, packed to the rafters with dark secrets reaching back through generations.

Think of Manderley in Daphne du Maurier’s Rebecca. The house and its sepulchral housekeeper Mrs Danvers are really two sides of the same coin: both belong to Rebecca; both are hostile to the second Mrs De Winter. When Mrs Danvers encourages her new mistress to jump from an upstairs window, it feels like she and Manderley are explicitly colluding. Rebecca’s ghost isn’t truly exorcised until Manderley burns to the ground. (Of course Jane Eyre came first, with the threat of another first wife obliterated in another catastrophic house-fire.) Hundreds Hall in Sarah Waters’ The Little Stranger is another fine example of the genre, with (spoiler alert) the narrator’s pent-up frustration and bitterness literally scorching the walls.

Away from the overtly gothic, Evelyn Waugh’s Brideshead Castle is not only the subject of the book’s title but symbolic of the Flyte family’s disintegration. When narrator Charles Ryder first visits, the house is impossibly grand and seemingly impervious and yet, by the end, it is scarred and forlorn following wartime requisition by the army. In LP Hartley’s The Go-Between, the Maudleys’ family estate looms large in Leo’s memory: not just the house but the flat, sun-bleached Norfolk fields around it, the deadly nightshade that thrives sinisterly in forgotten corners of the garden and the outbuildings where Marian’s affair (and sex in general) is so shockingly discovered. Sensitive and socially inferior, Leo is an interloper who is punished for thinking he might belong in that world—his single summer at Brandham Hall ultimately ruins him.

Away from the haunted piles of the English countryside, the eponymous Dutch House in Ann Patchett’s most recent novel becomes an obsession for Maeve, who spends winter evenings sitting outside it in her car, simultaneously seething at the stepmother who stole it and longing for the mother who abandoned her there as a child. Meanwhile, in Ireland, the notion of the ‘big house’ specifically refers to the 18th-century mansions that became a target when Irish resentment towards Anglo-Irish landlords bubbled over in the revolutionary period of the 1920s, with many of them being burnt down, abandoned or even bombed. Tana French harks back to this in her second Dublin Murder Squad book The Likeness, in which privileged Trinity College post-grads play at being Bright Young Things after one of them, the fittingly Anglo-Irish Daniel, inherits a big house – until one of them gets stabbed to death, that is. Sally Rooney also touches on this in Normal People, with poor little rich girl Marianne living in the big house where Connell’s mum is merely the cleaner. For Marianne, her big house is associated with nothing but her mother’s coldness and her brother’s casual cruelty. Whenever she is forced to return, she is set back psychologically for months.

The house in my own French-set novel The Heatwave—the grey-stoned, blue-shuttered La Rêverie—is a repository for memories both good and terrible, from the narrator Sylvie’s own childhood through to her last days with her lost daughter. There is something potent about a lovely, ostensibly escapist setting where bad things have happened—its beauty becomes black-edged and quietly menacing. At La Rêverie, the past is as tangible as the layers of wallpaper in the salon, each one peeling back to reveal another dark secret. As Sylvie says, ‘How many places here are inhabited by difficult memories? So many tiny hauntings that you can’t help treading on them, splinters of glass working their way under the skin.’ The story is already there, locked inside the house. The reader just has to find it. 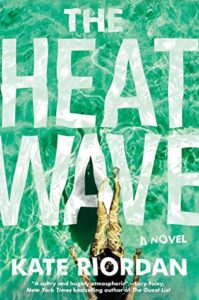 Kate Riordan is a writer and journalist. She is an avid reader of Daphne du Maurier and Agatha Christie, both of whom have influenced her writing. She lives in the Cotswolds, where she writes full-time. The Heatwave is her fourth novel. 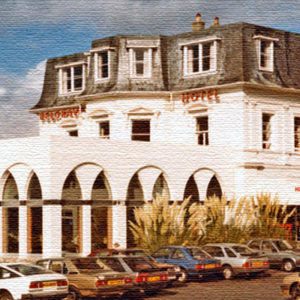 As someone who has spent a lot of time in hotel rooms, I consider myself a bit of an expert. This is not because I’ve been...
© LitHub
Back to top