From San Quentin to Johnny Carson

It can be dangerous, although often tempting, to assume parallels between the lives of fiction writers and their characters. But in the case of noir author Malcolm Braly (1925-80), it is easy too see his personal story in the pages of novels like Felony Tank (1961), Shake Him Till He Rattles (1963), It’s Cold Out There (1966), and On the Yard (1967). Braly, a career thief who spent much of his life behind bars, used his personal experiences in crime and punishment to add depth to edgy tales of bad decisions and their dire consequences. And he wrote most of his first two books while in prison. As told in his 1976 title False Starts: A Memoir of San Quentin and Other Prisons, Braly’s experiences as a con/writer are the makings of a thriller in their own right.

Abandoned at 14 by a drifter of a father (his mother was long gone from the family), Braly ended up in a reform school at age 17 after he was caught stealing. Paroled at 18, he was soon back in prison, San Quentin this time, after a spree of armed robbery, grand theft auto, escaping arrest, and having an armed standoff with law enforcement officials. From that point until he was on the cusp of 40, Braly was usually in jail.

In False Starts, Braly tells of writing his debut, Felony Tank, while inside San Quentin. An autobiographical novel, its protagonist is a 17-year old orphan and lost soul who, when caught attempting to rob feed a store after hours, tells the cops he is 18, a prideful falsehood that lands him in an adult holding cell while awaiting a hearing and sentencing. In order to finish the novel in prison, Braly got a clerical jailhouse job, so he would have access to a typewriter. Then, as that position was non-paying, when his manuscript was complete he got another, more demanding, desk job, one that paid enough to bring him the funds he needed to cover postage when sending his manuscript out to literary agencies. His jailhouse peers (some of whom were published writers) acted as his first line of proofreaders.

Braly’s literary break came when an agency sympathetic to imprisoned writers sent his novel to famed editor and agent Knox Burger. Burger liked Felony Tank for the Fawcett Gold Medal line he was then overseeing. After some revisions based on Burger’s critiques, Braly had a contract and, ultimately, a published novel. Felony Tank was nominated by the Mystery Writers of America for their annual Best First Novel in the Suspense Field award garnering second place. Burger remained a close ally of Braly’s for years to follow.

If it felt to Braly like he was entering a new, freer and more celebratory kind of life after the publication of his first book, the prison authorities soon brought him back to cold reality. The problems for the higher-ups at San Quentin came when they realized that Gold Medal publicized Felony Tank as a prison novel by a prisoner. Leery of readers seeing the operations of their facility in the pages of their resident’s writings, they demanded Braly show them his work-in-progress (Shake Him Till He Rattles), that they might scrub it of the kind of factual portrayals they’d let slip through in Felony Tank. Using the threat of seeing Braly’s contract with Gold Medal revoked, they got their wish. Meanwhile, they started rerouting his personal mail to a home office, and they pulled him out of the cushy off-site facility he’d been enjoying, and brought him back to the harsher world of the main San Quentin grounds.

Shake Him Till He Rattles, the early drafts of which Braly wrote alongside Felony Tank, explores the seedy underbelly of San Francisco’s North Beach scene in the early 1960s, a neighborhood Braly got to know on his brief spells out of prison It can be seen as a noir alternative to Kerouac. Wary of the censorship threat, Braly held off on finishing that book while in lockup, instead completing it while he was out on parole. On the outside, he learned that he had committed a violation of that parole by submitting a working draft of the manuscript to Burger before showing it to his current (sadistic) parole officer. He was free but not really free. He didn’t get sent back to San Quentin for that particular infraction, but his p.o., who seemed hell bent on humiliating and terrorizing Braly, found another means to have him returned to detention: Braly’s offense of having traveled from Los Angeles, where he had been living, to San Francisco, a locale he thought a better fit for him as he attempted to complete On the Yard. He didn’t ask for his p.o.’s permission to make that jaunt, and soon enough he was found out, arrested, and escorted back to San Quentin. He served another year before finally being discharged for good.

Out of prison, Braly found that his life as a jailbird followed him in unexpected ways. Some 18 months after leaving San Quentin, he was pleased to be invited as a guest on “The Johnny Carson Show.” Braly thought he was being brought on as an up-and-coming writer. On the Yard, his novel based on his experiences at San Quentin—which would later be championed by the likes of John D. MacDonald and Kurt Vonnegut, Jr., and made into a feature film in the late ‘70s—had just been published. He was on the show alongside other guests Rich Little and Stella Stevens: three performing stars (he thought). But as Braly made the walk to Johnny’s chat area, the Tonight Show Band played “Birmingham Jail” as his entrance soundtrack, and in the discussion Carson showed no interest in Braly’s work as an author; he only asked him questions about prison life.

Prior to the publication of On The Yard, Braly’s third novel was released. It’s Cold Out There, another work of fiction in which Braly used his own life as the basis of a story, follows an ex-con in his attempts to find a niche for himself in the open world after he is released from prison.

Felony Tank, Shake Him Till He Rattles, It’s Cold Out There, and False Starts have all recently been reissued by Stark House Press. On the Yard is available in a New York Review Books Classics edition. 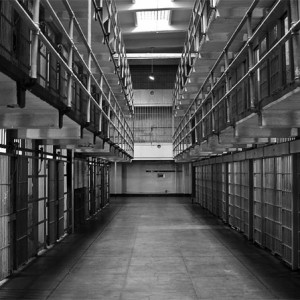 Crime fiction enthralled me as a kid. After growing out of Goosebumps and Fear Street, I began to get my thrills from the likes...
© LitHub
Back to top