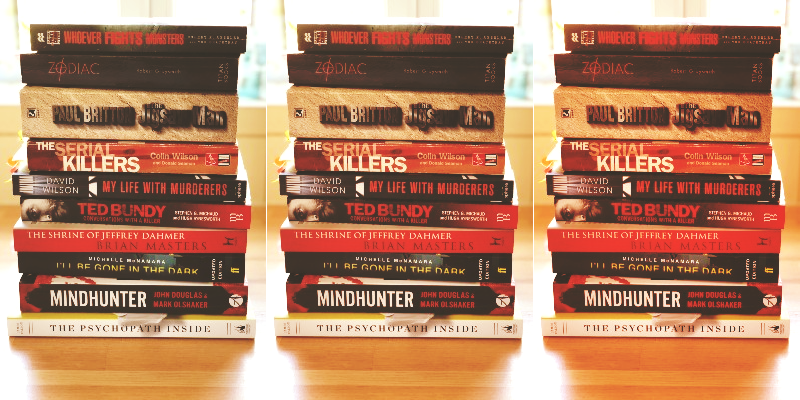 Sam Holland fills out a bookshelf for those who want to take their reading to a dark place.

“Write what you know,” they say. Which, on the face of it, is good advice. But what if you write about murder? What if, like me, your book is about the most depraved killers the world has ever known? Then, just maybe, you write what you can research.

My new novel, The Echo Man, centres around a serial killer who takes his inspiration from infamous murderers of the past, the ultimate copycat killer. But imitation isn’t enough: he is ready to complete his own masterpiece. And it will be more horrifying than anything that has come before.

At this precise moment, there are over 100,000 true crime books listed on Amazon. The choice is mind-blowing. I cannot claim to have read even a fraction of these, but I know from experience that some are incredible. When I was writing The Echo Man I made my way through over two dozen serial killer biographies, and many more on the subject of criminology and psychopathy. I demolished true crime podcasts and countless documentaries; I must be one of few who sit through these with a notebook.

So, here are my favourites.

Let’s start with the serial killers. As my fictional murderer, The Echo Man, copies real-life killers, it was important to me to get the facts right. And not just the little details but also the psychology of why he killed and how.

There was no way I was going to write about real-life serial killers without including Ted Bundy and Jeffrey Dahmer. Probably the most infamous, and for me, the most fascinating. These were men who, on the face of it, had everything going for them, but could not suppress their deepest, most depraved desires.

There are hundreds of books, thousands even, on Ted Bundy. But my favourite has to be Ted Bundy: Conversations with a Killer by Stephen Michaud and Hugh Aynesworth. The authors were journalists, given unprecedented access to Bundy in the years running up to his execution. Their interviews, transcribed word for word in this book, give a unique insight into the workings of Bundy’s consciousness. (The book, The Only Living Witness, was also based on these interviews.)

While the above provides a snippet in time to Bundy’s state of mind, Brian Masters’ The Shrine of Jeffrey Dahmer, is a comprehensive account of the serial killer’s childhood, upbringing and adult life. Detailed and meticulously researched, Masters explores the psyche of the man who, when he was arrested in 1991, had a severed head in his refrigerator, and two more in the freezer.

One serial killer who remains unknown to this day is the Zodiac Killer. Operating in California in the late 1960s, he sent ciphers to newspapers – a detail I couldn’t resist replicating in The Echo Man. The definitive book on the Zodiac Killer is written by Robert Graysmith (Zodiac: The Shocking True Story of America’s Most Elusive Serial Killer) – a political cartoonist for the Chronicle who became obsessed with the case.

I would be remiss, when talking about true crime books, not to include I’ll Be Gone in the Dark. Now made into a documentary for HBO, Michelle McNamara’s account of her search for the Golden State Killer makes for gripping reading. Tragically she died before Joseph DeAngelo was caught and convicted, but it is widely acknowledged that her tireless work was integral to the investigation and to his arrest in 2018.

Now onto the psychology of serial killers – beginning with the fathers of modern profiling: John Douglas and Robert Ressler. Both Ressler and Douglas worked for the FBI and were instrumental in setting up the Behavioural Science Unit, as well as the Vi-CAP centralised computer database of information on homicides. Their revolutionary approach of interviewing known serial killers in order to find trends in their thinking and methods, led to interviews with Charles Manson, Ed Kemper and the Son of Sam, David Berkowitz, among others.

Both have written many eye-opening books, but Mindhunter and Whoever Fights Monsters are a great place to start.

Colin Wilson’s The Serial Killers: A Study in the Psychology of Violence is another thorough review of murderers and their psychology: from Jack the Ripper to modern day.

Across the Atlantic, Paul Britton’s books provide similar understanding. A forensic psychologist, he has consulted on over a hundred cases with the police, including the Jamie Bulger abduction, the Rachel Nickell murder, and Fred and Rose West. The Jigsaw Man provides fascinating insight into the minds of offenders from the other side of the pond.

Dr David Wilson is a Professor of Criminology and has spent most of his professional life working with violent men, most of them in prison. His observations in My Life with Murderers, especially his examination of the sociological causes of serial killing provide an interesting juxtaposition to the view from law enforcement teams and psychologists.

And finally, if you want to understand the mind of a psychopath, read a book written by one. James Fallon is a neuroscientist and was reviewing brain scans of psychopathic murderers when he discovered his own – taken as a control subject for a study on Alzheimer’s patients – shared many of the same abnormalities. What followed was a fascinating dive into his own psychopathy. His personal journey and realisations are captured in The Psychopath Inside.

There are many more books out there, but these have been my favourites over the last few years as I researched The Echo Man – an indulgence of my interest into the most violent men in history. 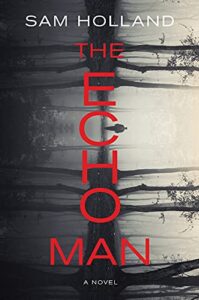 Fallon, James. (2014). The Psychopath Inside: A Neuroscientist’s Personal Journey into the Dark Side of the Brain. New York: Penguin.

Wilson, Colin and Seaman, Donald. (2007). The Serial Killers: A Study in the Psychology of Violence. London: Virgin Books.

Sam Holland is a debut author and self-confessed serial-killer geek who lives near Southampton. 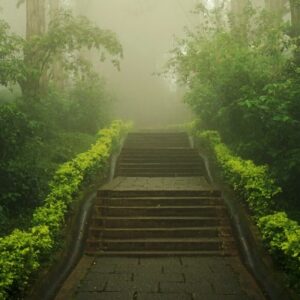 Setting is a character. This nugget of literary wisdom was written in a text by a writer whose name I no longer remember,...
© LitHub
Back to top