Heather Gudenkauf on her lifelong passion for snowy literature.

My love for stories featuring the theme of human vs. the elements started at a very young age, when I would squirrel away in my toy box (a story for another day) with a blanket, a pillow, a flashlight, and my books. Over the years, I escaped into the wintry worlds created by the likes of Ezra Jack Keats in The Snowy Day, Mr. Popper’s Penguins by Florence and Richard Atwater, and The Long Winter by Laura Ingalls Wilder. Eventually, I found my way to The Shining by Stephen King (though I was long out of the toy box by that time). My love for books set in snowbound settings hasn’t waned. Here is a list of thrillers and mysteries where an untimely winter storm takes center stage. 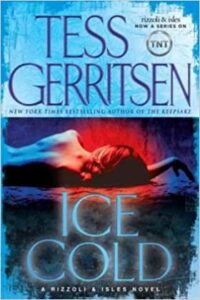 Since the beginning, I’ve been an avid fan of Tess Gerritsen’s Rizzoli and Isles thriller series, and her eighth installment, Ice Cold, is one of my favorites. Chief Medical Examiner Maura Isles travels to Wyoming for a medical conference when she bumps into a former classmate. In a rare moment of whimsy, Maura decides to go skiing with her long-lost friend, his daughter, and another couple. As they travel up the mountain, a winter storm hits, leaving them stranded in the elements. The ill-prepared group finds shelter in the abandoned village of Kingdom Come, but someone is lurking in the snow, and they are far from safe.

Back in Boston, homicide detective Jane Rizzoli becomes worried when she gets word that a burned body matching Maura’s description has turned up in the mountains. With more questions than answers, Jane travels to Wyoming in hopes of finding the truth and discovers that something much more dangerous than a blizzard may have claimed her best friend. 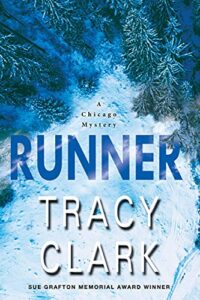 When I started reading Runner by Tracy Clark, it was a mild December day in the Midwest. Still, I had to pull on my warmest sweater, coziest socks and pause to brew a hot cup of tea before reading on. In her fourth Chicago-based novel featuring PI Cassandra Raines, Clark captures winter in the Windy City perfectly. And just as chilling is Raines’s current case—the search for Ramona, a fifteen-year-old runaway. Raines can’t stand the thought of a young girl out on the streets, fending for herself in subzero temperatures, and as she draws closer, she discovers something much more nefarious at play in Ramona’s disappearance. While Runner is the first novel I’ve read by the talented Clark, I will quickly dig into the rest of the series. 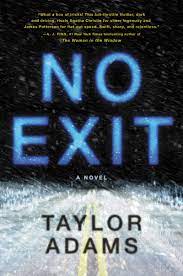 No Exit, by Taylor Adams

The very first line of No Exit by Taylor Adams had me hooked. I mean, who hates the iconic holiday song, “White Christmas” so much they tell classic crooner Bing Crosby to do something anatomically impossible two days before Christmas? Thus begins, No Exit. Darby Thorne is driving solo through the mountains of Colorado, desperately trying to get home to Utah and to her mother, who is suffering from late-stage pancreatic cancer before Christmas.

Equipped with only a quarter tank of gas Darby finds herself without cell coverage and in the belly of a raging blizzard that was only getting worse. In search of cell access and a hot cup of coffee, Darby’s only option is to pull over at a rest stop. There Darby meets four strangers, all waiting out the storm. Desperate to get a cell signal to call her mother, Darby goes back into the storm and makes a chilling discovery—a van with a young girl in a cage locked inside. In a race against time and the elements, Darby has only her wits to use as a weapon against an unknown evil. 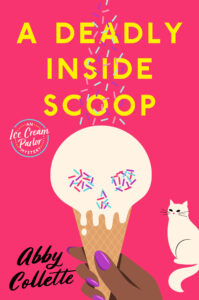 A Deadly Inside Scoop, by Abby Collette

A Deadly Inside Scoop by Abby Collette is a deliciously binge-able read, perfect for a cold winter night. College grad Bronwyn Crewse has returned to her Ohio hometown to take over the family ice cream shop—Crewse Creamery. Bronwyn learns early on that running a business comes with unexpected headaches, including a delayed grand opening, a looming winter storm, and a dead body.

Bronwyn is shocked to learn that her father had a decade-long feud with the victim and is now the main suspect in the murder. Determined to solve the mystery, Bronwyn slings ice cream cones while trying to clear her father’s name. The result—a cozy, wintry escape with a cast of memorable characters. And if one Crewse Creamery ice cream cone isn’t enough for you, no worries! Two more books in the series await you. 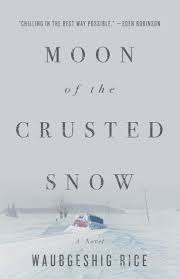 Moon of the Crusted Snow, by Waubgeshig Rice

A remote northern Canadian Anishinaabe community becomes even more isolated when, without warning or explanation, they lose electricity, cell service, and all communication with the outside world. As the days and weeks pass and the winter weather worsens, food, medicine, and fuel become scarce, causing tension among the tight-knit community. To make matters worse, a heavily armed stranger straggles in desperate for shelter and relief from the chaos unfolding in the south and bringing chaos and discord in return.

Faced with devastation and certain death, members of the Anishinaabe community, led by Evan Whitesky, come together and try to prevent the collapse of their society. United, they must return to long revered traditions to survive.

To say I became entirely immersed in Moon of the Crusted Snow as I read understates just how captivating, intriguing, and how beautifully written this book was. It’s both a lyrical and brutal exploration of how, in the midst of collapse, humanity seeks order. 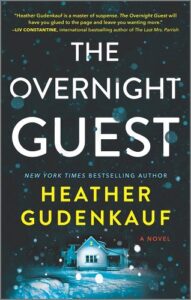 Heather Gudenkauf is a New York Times and USA Today bestselling author of The Weight of Silence and Not a Sound. Heather lives in Iowa with her family. Her newest book, The Overnight Guest publishes this January. 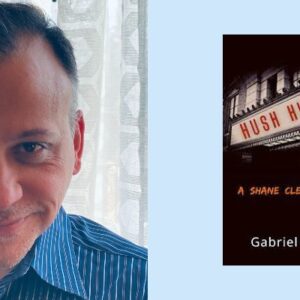 Like many writers, Gabriel Valjan does not like to talk about himself. On social media, he seems more comfortable boosting...
© LitHub
Back to top