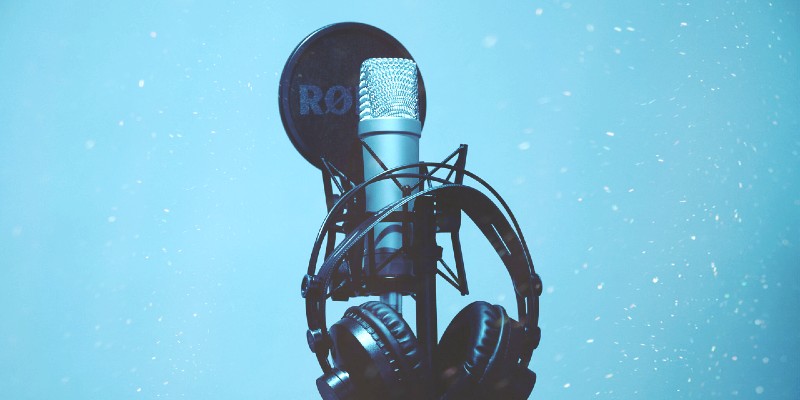 Cold cases, hot investigations, and a visit to the body farm.

Is spooky season over already? No sooner had I un-donned my Elizabeth-Holmes-at-Burning-Man costume than it was time to crank up those holiday tunes, cue up the Hallmark holiday movies (30 all-new flicks to check off your list this year!), and trade in my PSL for a peppermint mocha. (Just kidding: I’m an iced-coffee-all-year-round kind of gal.)

No matter the season, I’m always down for a bursting cornucopia of brand-spanking-new (and returning) pods. Get ready to drown out “Jingle Bells” and “All I Want for Christmas Is You” (sorry, Mariah) with these eight spine-chilling shows. 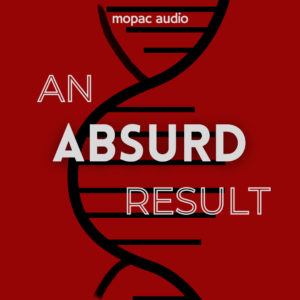 I will listen to (read: devour) absolutely anything Mopac Audio (the team behind LISK: The Long Island Serial Killer) puts out, this newest offering included. An Absurd Result, a new seven-episode series, takes place in a time and locale far from Gilgo Beach: Billings, Montana. 1987. A man slips into the home of Linda Tokarski Glantz through a bathroom window and proceeds to rape the 8 year-old girl. A desire for much-needed justice morphs into a rushed investigation, catching Jimmy Bromgard, an 18 year-old with a minor criminal record, in the crosshairs. Bromgard serves 15 years of a 40-year sentence, only to be exonerated in 2002 with the help of the Innocence Project: DNA evidence proves Bromgard could not have been Glantz’s attacker, though the identity of the rapist remains unknown.

Fast-forward to 2014: DNA from Glantz’s as-yet-unidentified rapist hits on a match in CODIS. (If you’re reading this article, I’m guessing you already know CODIS stands for Combined DNA Index System.) The man’s DNA, which was entered into CODIS as a result of an unrelated drug charge, matches forensic evidence collected from the original 1987 rape scene.

This should be an open-and-shut case, right? Wrong. Despite the DNA evidence, Glantz’s true attacker will never serve a day in prison for his crime because of Montana’s statute of limitations. Host Jule Banville, a University of Montana journalism professor who’s spent years researching this case (and collaborated with survivor Glantz on the podcast), unpacks what is truly an absurd legal result, diving into the specifics of this case and examining the larger issue of statute of limitations laws when it comes to prosecuting sexual assault cases. 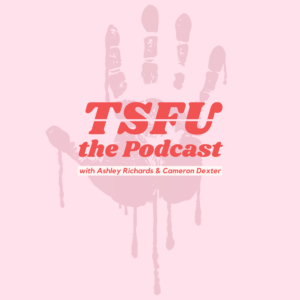 Okay, so technically this one isn’t new new (it premiered in April 2020), but I couldn’t pass up the opportunity to profile this saucily-named indie contender as soon as I discovered it.

Don’t let TSFU’s millennial-pink aesthetic fool you: co-hosts Ashley Richards (whose incredible pink tresses have got me seriously considering some new 2022 hair resolutions) and Cameron Dexter (a filmmaker in her own right!) serve up some, well, truly f***ed up stuff: think cannibalism, cults of all stripes (Satanic, reptilian, alien—take your pick!), serial killers, and much much more.

Humor is definitely on the menu (see Episode 65: Whose Leg is it Anyway? ), but so is deep research and first-hand interviews with key players in the true-crime game: among the podcast’s many guests are world-renowned cult expert Dr. Janja Lalich, former FBI Special Agent Bryanna Fox, and Helen Zuman, a Harvard-grad-turned-sex-cult-member-turned-writer.

Richards, Dexter, and sound maven Evette Darensbourg (the pod’s audio engineer and occasional co-co-host) have the creds to bolster their true crime obsessions: all three have backgrounds journalism and/or broadcasting, and Dexter, a New Hampshire native, grew up just ten miles from where Maura Murray disappeared.

Did I mention that TSFU has hands-down the best true crime pod merch shop on the planet? Loved ones (and stalkers), if you’re reading this, this Wannabe Cult Member tee (and, okay, the matching mug and sticker too) is at the top of my holiday wish list. 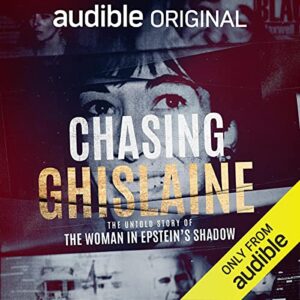 As a podcast columnist, I’m all about, well, access—namely serving you, dear reader, with juicy true crime goodness that doesn’t live behind a paywall.

That said, if, like me, you simply can’t wait until the December 3rd premiere of ID’s three-part doc Chasing Ghislaine (or just can’t get enough of this particular case), might I suggest its accompanying Audible Original podcast?

So much of the Jeffrey Epstein case has focused on, well, Epstein himself, along with the high-profile men in his orbit (including Donald Trump, Bill Clinton, Alan Dershowitz, and Prince Andrew). This podcast focuses squarely on Ghislaine Maxwell, the British socialite whose decades-long involvement (and nefarious doings) with Epstein resulted the sex-trafficking and abuse charges for which she is now facing trial. Instead of taking a plea deal, Maxwell insisted upon her innocence, and one of her charges (she faces a total of eight ranging from sexual trafficking of a minor to perjury) carries a 40-year maximum sentence.

Host Vicky Ward is a veritable insider when it comes to this case: she knows Maxwell personally (at one point, the two US-based British expats ran in the same social circles), and Ward penned an article on Epstein during her more than decade-long career at Vanity Fair (for which she interviewed He-Who-Must-Not-Be-Named himself).

Who is Ghislaine, the woman at the center of what Ward calls “a giant web of men”? Is she an unwittingly trapped fly or conniving black widow? Listen to Chasing Ghislaine to find out. 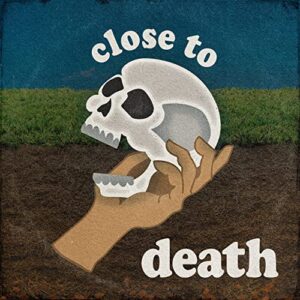 Okay, so technically I would put this one in the “true crime-adjacent” category, but I couldn’t pass up profiling a pod that tackles kooky (morbid?) professions like crime-scene cleaners, taxidermists, and death doulas.

In Close to Death, actor Utkarsh Ambudkar (Pitch Perfect, Brittany Runs a Marathon, and Hulu’s upcoming mini-series adaptation of The Dropout, dropping sometime in 2022), along with a host of comedians and reporters, meets people who make their living in the, well, death business. Ever wondered what it’s like to be an obituary writer? Or work on a “body farm” (a research facility dedicated to studying human decomposition)? Can we really talk to the dead? And will they talk back? A lively romp into the annals of thanatology (science speak for the study of death), this podcast reminds me of certain This American Life episodes (see 319: And the Call Was Coming from the Basement and 523: Death and Taxes) in the best way possible 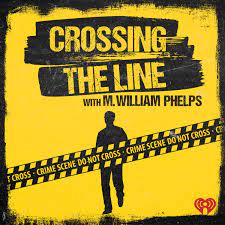 While the name M. William Phelps might not sound familiar to you, chances are, if you’re as big a true crime fan as I am, you’ve definitely seen his face before on many an Investigation Discovery and Oxygen doc. I’ll give you a minute to Google him. Are you saying, “Oh yeah! That guy!” Thought so.

The veritable Guy Fieri of the true crime world (and I mean that in the best way possible: what’s not to love about a good set of frosted tips?), author of 45 (!) true crime books and star of over 350 (!!) hours of true crime television, adds yet another podcast to his hosting repertoire. His first, Paper Ghosts, covered the fifty-year-old missing-persons cases of four New England girls (Season 1) and a 1981 fire that may or may not have killed four members of an Ohio family (Season 2).

In Crossing the Line, Phelps takes us behind the yellow police tape to examine cases like those of Annie Le, the 24-year-old Yale grad student murdered in 2009 and Dorothea Puente, beneath whose sweet-little-old-lady façade lurked a cold and calculating serial killer. Combining his signature tell-it-like-it-is/no-holds-barred/take-no-prisoners (you get the idea) narrative style with the deep network of contacts he’s built over his two-decade career as an award-winning journalist, Phelps lets listeners experience true crime from both sides of the yellow tape (among the many cases the veteran journalist has covered is that of his pregnant sister-in-law, whose 25-year-old murder remains unsolved.) 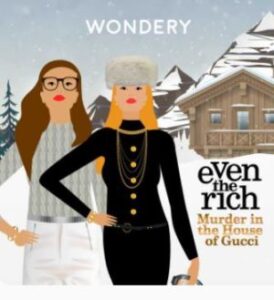 Even the Rich: Murder in the House of Gucci
(Wondery) – Premiered November 16

If there’s any mix potent enough to reel me in, it’s the intoxicating combination of fashion and true crime. Something about blood-splattered haute couture, killer models, the je ne sais quoi of fashion writers like Christa Worthington, I’m all for it. (By the way, if you haven’t already treated yourself to the pleasure of ID’s People Magazine Investigates: Crimes of Fashion or Last Looks, ill-fated Quibi’s high-fashion-meets-horrible-crimes show, please do; the latter has since migrated over to Roku.) That’s why, right on the stiletto-sharp heels of Lady Gaga’s star turn in House of Gucci, I’m recommending Wondery’s Even the Rich: Murder in the House of Gucci.

Even the Rich, now in its 21st (!) season, chronicles the follies and foibles of some of the world’s richest power players: think Kennedys, Murdochs, Gettys, and Versaces. In this newest iteration of ETR, hosts Brooke Siffrinn and Aricia Skidmore-Williams take on a Game of Thrones-esque family saga starring the scion of an Italian high-fashion dynasty and his Cersei Lannister-like wife.

On March 27, 1995, 46 year-old Maurizio Gucci, former Gucci chairman and grandson of Gucci founder Guccio Gucci, was shot just as he was arriving at work. Italy’s crime of the century had all the trappings of a tailor-made-for-the-tabloids thriller: revenge-bent ex-wife (herself a rag-to-riches Becky Sharp type), hit men, and, of course, the glamorous world of high fashion. If this holiday season has you hankering for a tale of love gone way wrong (with a good dose of style, of course), look no further than Even the Rich: Murder in the House of Gucci. 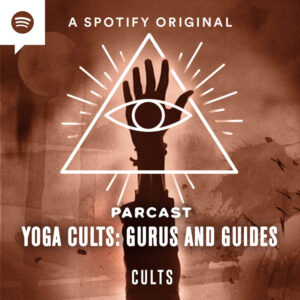 Ah, yes. New Year’s resolutions. There’s nothing like a creepy tale of ne’er-do-well wellness practitioners to get me jump started on those 2022 fitness goals.

In this newest three-part offering, the teams behind Parcast favorites Cults and Crimes of Passion join forces to pull back the curtain on the seedy (but toned!) underbelly of high-stakes yoga.

In Yoga Cults: Gurus and Guides, Greg Polcyn, Vanessa Richardson (Cults), and Lanie Hobbs (Crimes of Passion) dive swan-pose deep into cases like that of Gregorian Bivolaru, the Romanian yoga guru whose controversial organization Movement for the Spiritual Integration in the Absolute (MISA) has preyed upon tens of thousands of young women seeking spiritual guidance. Also on the docket? Geshe Michael Roach, the self-proclaimed Tibetan monk whose unconventional teaching methods (including allegations of cult-like behavior and sexual misconduct) may have led to a man’s death in the Arizona desert. 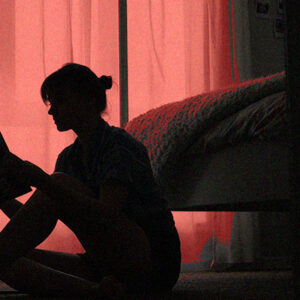 There’s nothing quite like a murder mystery. Learning all the juicy secrets behind the suspects, flipping the page and revealing...
© LitHub
Back to top