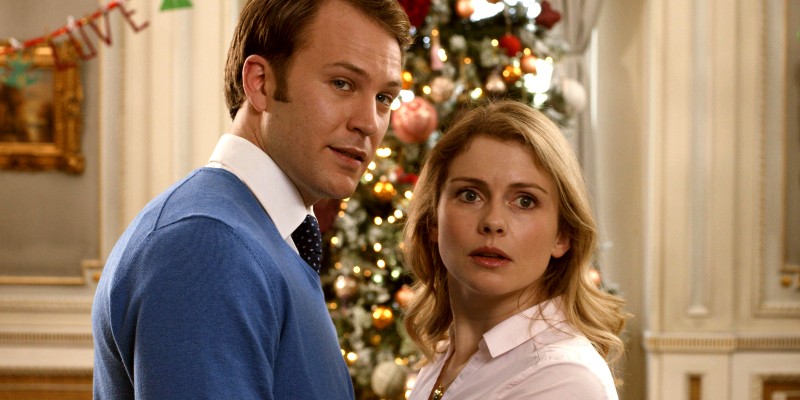 So you love noir, but you also love cheesy holiday movies with princes and meet-cutes. You're not alone.

Holidays in Tennessee with my mom and aunts wouldn’t be complete without a television in the background displaying picturesque winter landscapes, elaborately decorated mantels, and Winnie from The Wonder Years falling in love with a perfectly nice veterinarian or inn owner or prince. That’s right. ’Tis the season of Hallmark Christmas movies.

For years, I rolled my eyes at the predictable plots and railed against women giving up their careers for some guy they just met at the ice skating rink, but now when I’m told “put on whatever you want, honey,” I demur. “Oh, it’s fine,” I say. “I hardly know they’re on.” Then I sit down to find myself sucked into a swirling vat of cheerfulness called A Very Merry Mix-Up or Switched at Christmas or Suddenly Santa. You know, the classics. If you’re wondering what a crime fiction fan might get from these confectionary window displays calling themselves films, well, a few of them do star Lori Loughlin, though Hallmark has severed ties with the alleged felon.

And now I no longer have to wait until I’m visiting relatives with cable because a few years back, Netflix got in on the mushy magic of these satisfyingly formulaic offerings. You can now see what happens when a script about a big city gal returning to her, ugh, postcard perfect small town just in time for, ugh, her family to dote on her, and double ugh, introduce her to the hot widow next door gets a presumably bigger budget. With so many options to choose from, my gift to you this year is to watch them all* myself and let you know which ones contain the most suspense, violence, and intrigue for the die-hard noir aficionados out there.

And for the last time, Netflix, I get it. My viewing interests do suggest I might like The Irishman, but these gingerbread competition romances aren’t going to watch themselves. 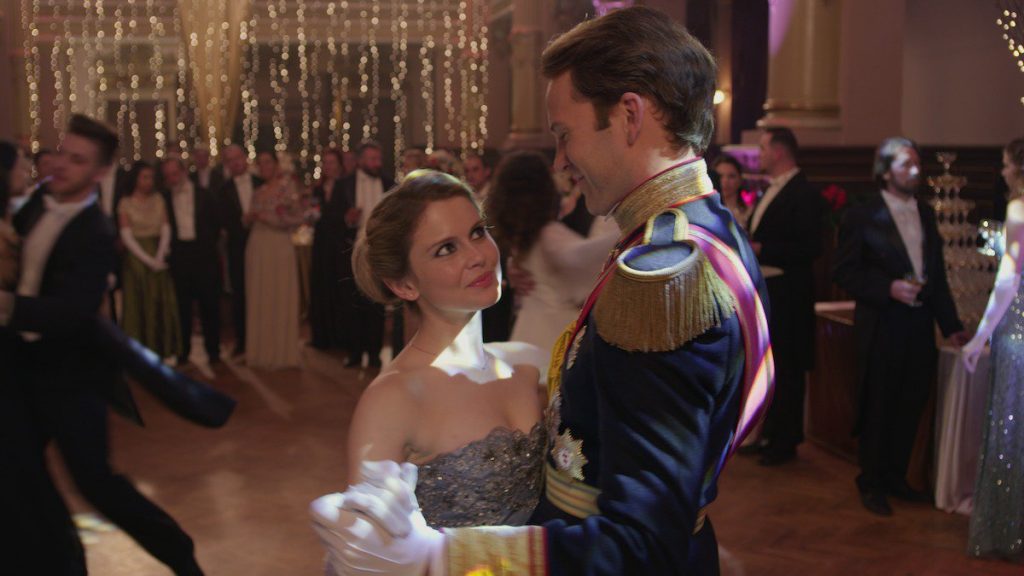 I’d be remiss to make a list of Netflix holiday romances without including the one that launched it all. You might say that A Christmas Prince is the fruitcake of the bunch, a blend of every trope you can imagine baked into a one festive treat that’s, well, not for everyone. But even if the finished dessert isn’t for you, you might find something to like in the sassy reporter (with questionable ethics) played by Rose McIver, the aloof but misunderstood prince, or the wolves. Wolves, you say? WOLVES. And while we know our plucky heroine will be saved in the nick of time, it’s a little suspenseful. If you squint. 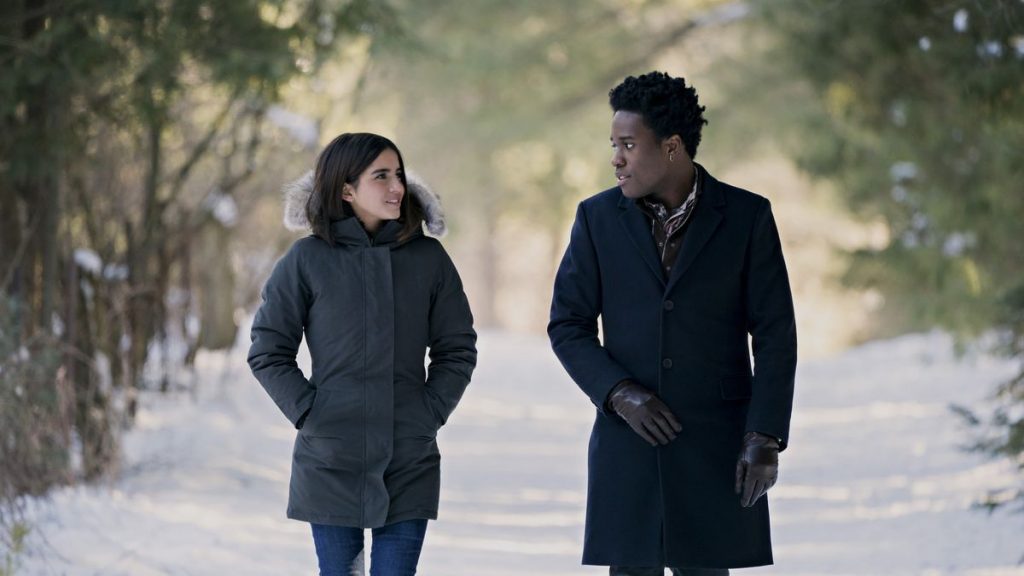 While a bit edgier than your usual holiday romance fare, this one checks all the requisite boxes with a stranger in a small town, enormous drifts of snow, and not one but three potential matches. (It’s rated, gasp, PG-13.) This teen foray is based on the John Green book Let It Snow: Three Holiday Romances and includes a meet-cute on a train, a stuck-up cheerleader who doesn’t understand how awesome the diner waitress is—at least not at first—and a boy ready to get out of the friend zone. And while I’m not the target demographic for this (I definitely wondered more than once, why aren’t these minors wearing warmer clothing?), it’s narrated by Joan Cusack who plays a foil-clad tow truck driver. 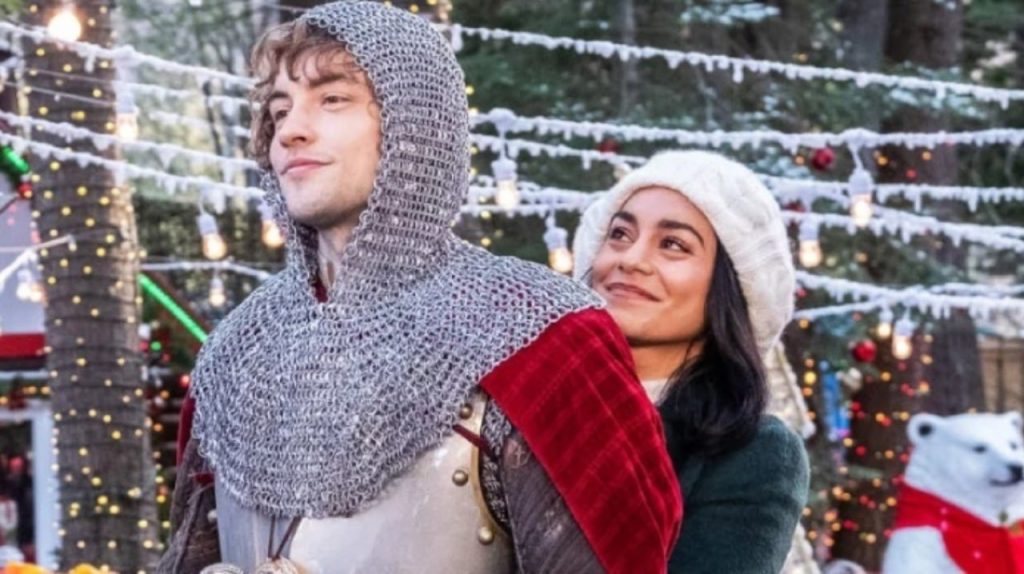 A Knight Before Christmas

If Hallmark has Danica McKellar, Netflix has Vanessa Hudgens, fast becoming their MVP of romantic holiday movies with the most bananas premise. And to be fair, Hudgens is just as charming as McKellar, both of whom manage to commit to their roles without once winking at the cameras to let us know that they know the premise is bananas. (Perhaps relatedly, Hudgens is also an executive producer on A Knight Before Christmas.) In this one, a knight from the 14th century is sent on an unspecified quest to the 21st century where he encounters cars, televisions, and hot chocolate. Children are saved, obstacles are overcome, and true love wins in the end.

Crimes rating: 3 daggers for hitting a knight with your car, pickpocketing, and destroying fake reindeer 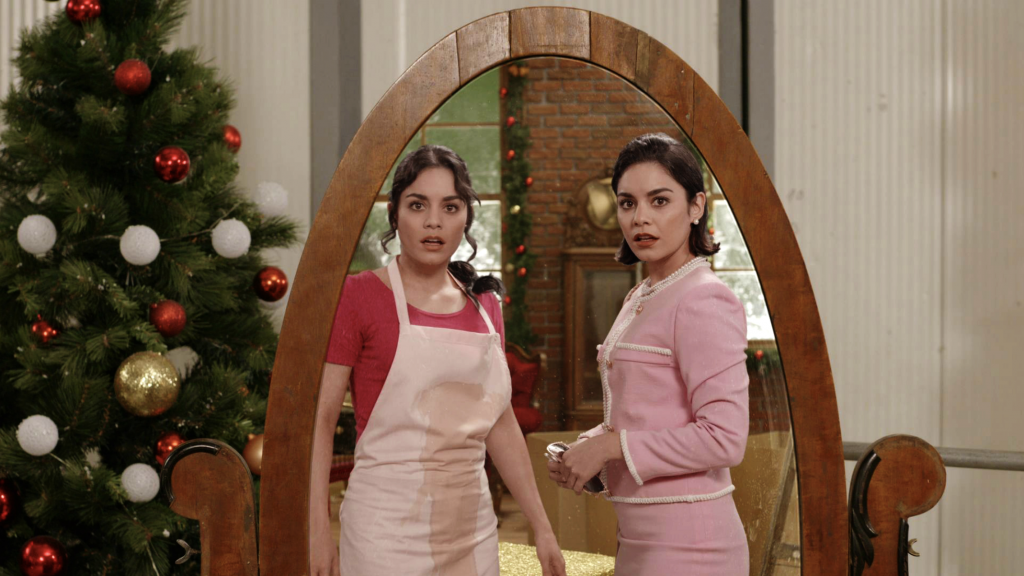 If, like me, you can’t get enough of Hudgens looking for her soulmate, The Princess Switch gives you not one but two heroines to root for. Hudgens #1 is a baker from Chicago. And if you’re thinking, but Erica, how will I ever remember that she’s from Chicago? Fear not! She helpfully wears a baseball cap that says Chicago, you know, just like all the locals. Hudgens #2 is a camera-shy duchess who wants to better understand her soon-to-be country before marrying its prince. So the Hudgenses mimic each other’s styles, practice walking like one another, and swap places. Hijinks and kisses ensue. 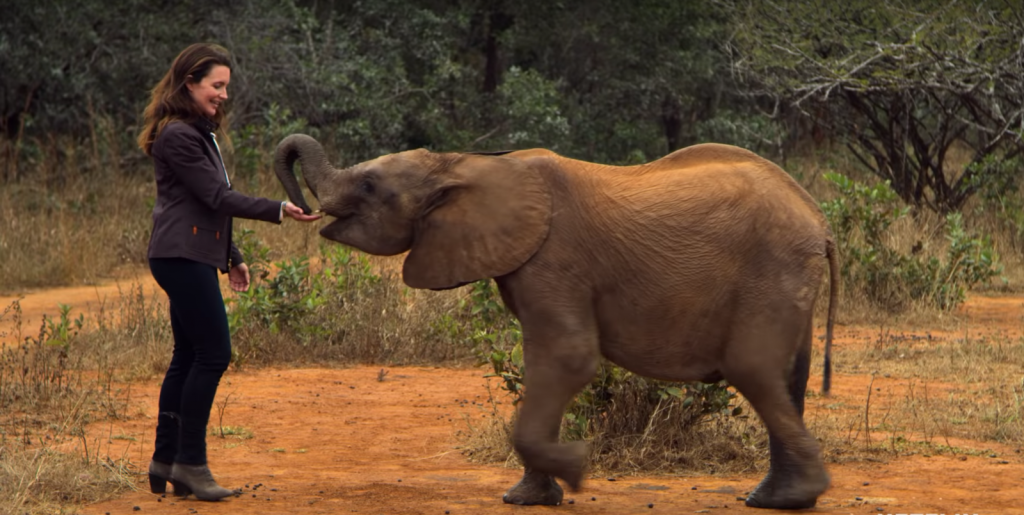 Holiday in the Wild

It’s a trap! It has “holiday” in the title, but the Christmas celebration feels a little tacked on. Really, this one might just be an excuse to promote elephant conservation, and I’m okay with that. After being left by her husband, a former veterinarian (who gave up her career to become a lady who lunches) played by Kristin Davis goes on a trip to Zambia by herself. There she falls in love with an orphaned baby elephant and Rob Lowe. Fair warning: this one has actual, awful crimes in it. Namely, poaching. 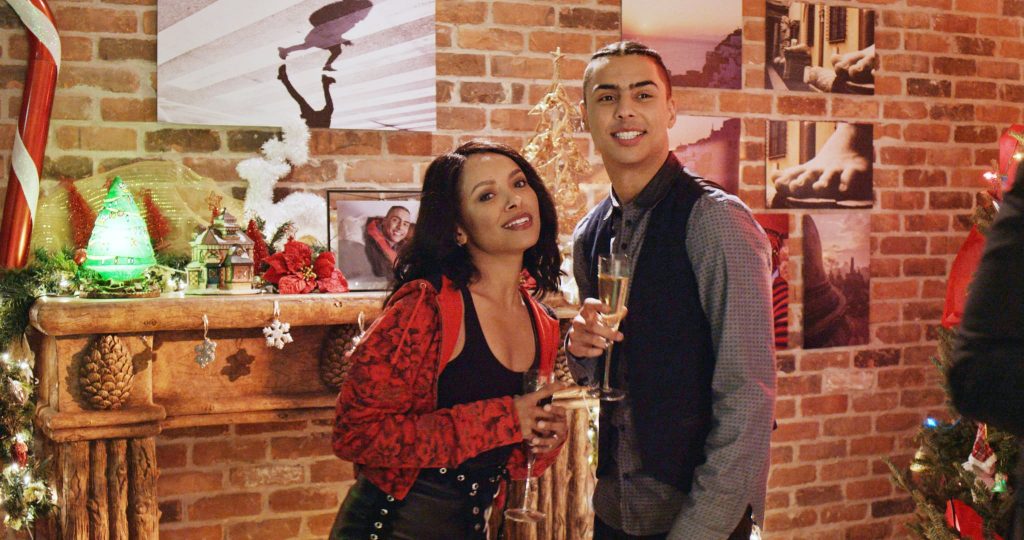 If these offerings aren’t quite magical enough for you (A Christmas Knight notwithstanding), there’s The Holiday Calendar with, well, a magical holiday calendar. A photographer, played by Kat Graham of The Vampire Diaries, receives an advent calendar from her grandfather. Each day, a new door opens and gives her a clue about what to expect. She misinterprets a few and almost falls for a handsome doctor, but it’s her best friend who’s really the one. In a fun surprise, it also turns out that travel blogging is very lucrative. Who knew?

Crime rating: One dagger for running over a Christmas tree 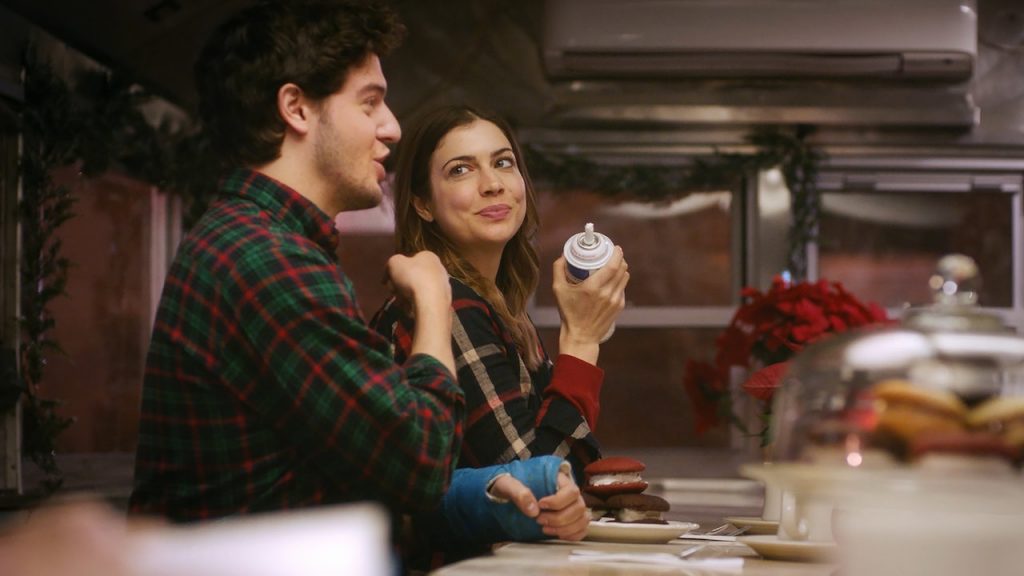 Saving the best for last, Holly Star includes an honest-to-goodness mystery! (It also gets bonus points for use of puppets.) Puppeteer Sloan gets fired from a commercial and slinks home to her—scandalously dreary for a holiday romance—hometown where her paintball-loving best friend agrees to help her look for buried treasure. Along the way, Sloan finds some drunk Santas, an extortion scheme, and a part-time job at a Christmas tree farm. And would you guess that the owner of the Christmas tree farm has a cute son around her age? Indeed he does. Holly Star fulfills all the requirements for this genre while being a bit more creative and—treasure hunt aside—believable. 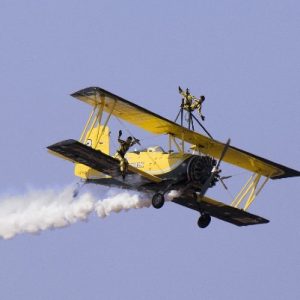 I’ve been incredibly fortunate in my writing career. No other way to put it. I’ve had the chance to write for some of the biggest...
© LitHub
Back to top