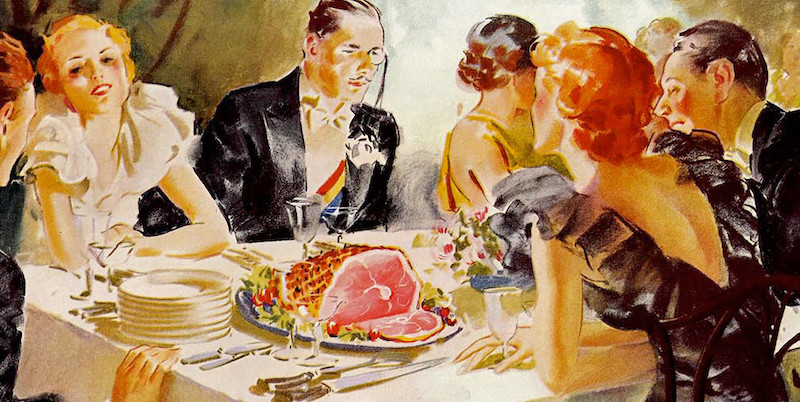 On the original gourmands of Golden Age detective fiction.

Culinary cozy mysteries have become a larger slice of the crime fiction market in the last two decades, mirroring the popularity of cooking shows on TV and YouTube. Most such books feature sleuths with food-related jobs. Among them are chefs, caterers, bakers, restaurateurs, food writers, and shopkeepers who sell ingredients, books, or tools for cooking. In my latest book, Bake Offed, which takes place at a mystery fan fest, a book vendor explains why culinary cozies sell well: “Readers want to know, not just whodunit, but what to eat for dinner.” The recipes appended to cozy mysteries serve that purpose. But years before culinary cozies became a mystery subgenre, cookbooks based on the eating habits of famous fictional detectives gave readers a foretaste of today’s culinary mysteries.

The authors of Dining with Sherlock Holmes (1976), The Peter Wimsey Cookbook (1981), and The Nero Wolfe Cookbook (1973) mined the works of Arthur Conan Doyle, Dorothy Sayers, and Rex Stout for allusions to the food their detectives ate as they solved crimes. The three cookbooks feature recipes along with descriptions or quotations from the scenes that inspired them. Despite the sleuths’ names in the titles of those books, all three of them had someone else making their meals, Mrs. Hudson cooking for Holmes, Bunter for Lord Peter, and gourmet chef Fritz for Nero Wolfe. Though the recipe is the entrée in these cookbooks with the mystery as a side dish, passages from the mysteries spark memories for those who’ve read them and whet the appetites of those who haven’t.

In today’s parlance the term foodie applies to Lord Peter Wimsey and Nero Wolfe, but decidedly not to Sherlock Holmes. The authors of Dining with Sherlock Holmes, Sherlockian Julia Rosenblatt and Chef Sonnenschmidt of the Culinary Institute of America, come up with recipes based on specific foods mentioned in the Holmes stories and on typical Victorian fare. A footnote identifies one recipe for a dish served during a commemorative Sherlock Holmes dinner in the 1970s. Menus for that and other Culinary Institute of America dinners honoring Holmes are in the book’s appendix, and those menus are to drool for. Dining with Sherlock Holmes may be the only book that received rave reviews in both Bon Appétit and The Armchair Detective. The cookbook was so successful that it went into a second printing in 1990.

Two examples show the methods the cookbook’s authors use to connect Holmes stories to recipes. The recipe for Mrs. Hudson’s biscuits follows an introduction to biscuits as a staple at Baker Street. Holmes consumes them after a three-day fast in “The Adventure of the Dying Detective,” and the biscuits revive a man who collapses from hunger at Baker Street. The cookbook contains passages from “The Adventure of the Blue Carbuncle,” a story centered on a Christmas goose, as the lead-in to recipes for a ten-course holiday menu that includes two different ways of cooking a goose.

Unlike the Holmes stories, the Lord Peter Wimsey mysteries by Dorothy Sayers are replete with details about eating and drinking, giving authors Elizabeth Bond Ryan and William Eakins a cornucopia of dishes to include in The Lord Peter Wimsey Cookbook. Those dishes are often parts of a multi-course meal, like the dinner Lord Peter orders in The Unpleasantness at the Bellona Club. The feast starts with oysters fried in their shells. The recipes for the fish, pheasant, potatoes, and soufflé contain at least two of the following ingredients: eggs, heavy cream, butter, and bacon. Calorie counts aren’t part of the recipes.

Not all the menus culled from the Dorothy Sayers mysteries are quite so extravagant. The dinner described in Strong Poison features cold jellied beef consommé, poached turbot with parsley sauce, a chicken and vegetable casserole, and a sweet omelet. The preparation of the omelet comes out in a courtroom scene in this book. A solemn, bewigged judge recites the ingredients and instructions for making the omelet, which the victim ate shortly before dying. Strong Poison might be the first mystery to include a detailed recipe within the story.

Recipes play a larger role in mysteries featuring gourmand detective Nero Wolfe. His creator, Rex Stout, is as serious about food as his character and is listed as the author of The Nero Wolfe Cookbook, though he credits other writers for testing and explaining the recipes. While solving crimes, Nero Wolfe obsesses about food, often discussing recipes with his personal chef Fritz. Those discussions and other scenes from the Nero Wolfe mysteries preface the recipes. The cookbook includes simple recipes with few ingredients, such as for leg of lamb, polenta, and sponge cake. But many dishes have fifteen to twenty ingredients and multiple steps, and a few require food not found in most supermarkets—squirrels, opossum, starlings.

The Wolfe book that most obviously anticipates culinary mysteries is Too Many Cooks, which includes recipes at the end of some editions. Rex Stout’s 1938 publicity tour for this book featured an editorial luncheon in twelve cities and a keepsake for the guests: a set of recipes in a box designed to look like a book. Prized by collectors, the promotional recipe box is now worth more than a first edition of the book. In case you’d like to own this artifact of mystery history, you can find one for sale online, where a rare book dealer is currently asking $3,750 for it.

The recipe box plays a role in Bake Offed, my latest Five-Ingredient Mystery, in which café manager Val and her grandfather volunteer to help a friend in charge of a mystery fan fest. In addition to panels and book signings, the fest includes an unusual event for such gatherings—a bake-off. Each contestant in the Deadly Desserts Bake-Off must play the role of a cook to a famous fictional detective and make a dessert the detective would enjoy. Val’s grandfather, a food columnist who promotes five-ingredient recipes, is miscast as Nero Wolfe’s gourmet chef Fritz. Flipping through the Wolfe books, Granddad finds only “fancy dishes with scads of ingredients.” But in the attic he discovers a treasure bequeathed by his mystery-loving aunt—a book-shaped box of Nero Wolfe recipe cards. The box inspires Granddad’s dessert for the bake-off. He faces stiff competition from his rival food columnist, Cynthia Sweet, playing Mrs. Hudson. On the night of the bake-off Granddad’s prized recipe box disappears and Cynthia is found dead in her hotel room next to a whistling teakettle. While some fest attendees assume Mrs. Hudson’s murder is a mystery game, Val and Granddad act fast to protect a witness in jeopardy and prevent another death. 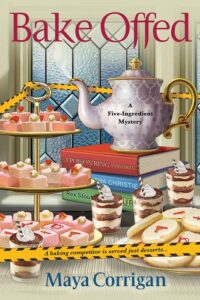 Maya Corrigan, a Virginia resident, combines her love of food and detective stories in her Five-Ingredient Mysteries. Each book has five suspects, five clues, and five-ingredient recipes. Her eighth book, Bake Offed, set at a mystery fan fest echoes classic mystery tropes—disguises and false identities, wills and inheritances, crime re-enactments, and a ploy to snare the killer.
http://mayacorrigan.com 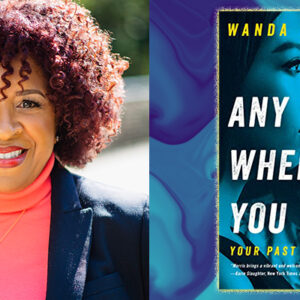 Wanda Morris is one of my favorite up-and-coming authors in the genre; her first novel, All Her Little Secrets, was an impeccably...
© LitHub
Back to top