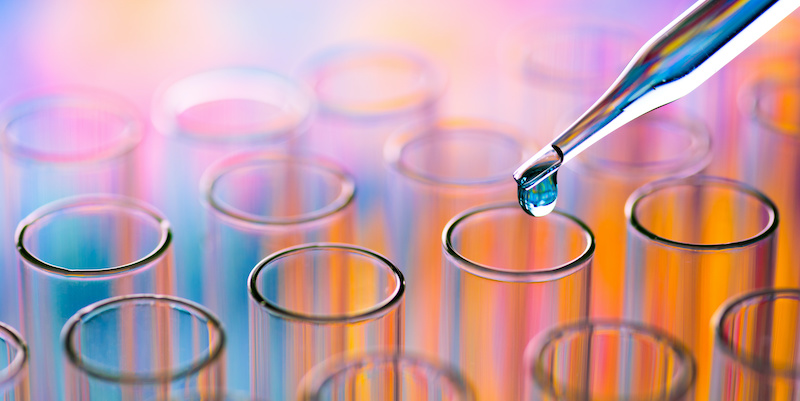 Robert Lanza and Nancy Kress on their unique collaboration.

Scientist Robert Lanza and science fiction author Nancy Kress have co-written a new thriller grounded in deep scientific principles and guided by the writers’ shared passion for technology and biocentrism. Read a conversation between Lanza and Kress below.

Kress: Robert, you’re a pioneer in stem cell research and in addition to writing dozens of textbooks related to the topic, you’ve written three works of nonfiction on biocentrism, the central concept in our novel, OBSERVER. Why now a novel?

Lanza: I wanted to introduce the ideas of biocentrism ─ where life is the basis of the universe ─ to a broader audience through storytelling to bring to life the science behind the astounding fact that time, space, and reality itself, all ultimately depend upon us, the observer.

Kress: We did have a lot of fun putting the pieces together, didn’t we?

Lanza: We did indeed! I have to say I was initially wondering if we’d butt heads and have to slog it out. LOL. In spite of the fact that you’ve written 33 books and won 8 Nebula and Hugo awards this was your first collaboration. Were you nervous going into this? And how do you feel about how it turned out?

Kress: I’m very pleased with how the book turned out. “Slog” is way too harsh a word, since I enjoyed writing the novel.  However, there was, if not “head butting” than certainly “head scratching” as you and I figured out how to integrate the complex theory of biocentrism plus the science underlying it into a story without slowing down the action. Someone once said that good fiction should make the reader both think and feel, and that was our aim.

Lanza: OBSERVER features a crime that you and I devised together, and that leads to further crimes, including multiple murders. Yet people do not often associate scientists with crime. What do you see as the connection?

Kress: The criminals are not the scientists but characters with malevolent intentions who translate science into technology, which is—and always has been—true of any science. The day that humanity discovered fire, the crime of arson became a possibility. And so on through the ages. And it is not, of course, mutually exclusive to both work to advance humankind through science and to profit personally from your work; scientists, too, have to pay the mortgage and feed their kids.

Lanza: You seem to intuitively understand the concepts behind biocentrism, perhaps even better than most theoretical physicists : ) Some people are never able to wrap their mind around the ideas. Did you go through a struggle like Caro did in the novel?

Kress: In the beginning, I did struggle a bit to master the ideas in your three non-fiction books; this is because I am not trained as a scientist, and so much of biocentrism is counter-intuitive in the same way that quantum physics is counter-intuitive: What? A particle is also a wave, except when it isn’t? What I do to an electron here affects an electron way over there? The presence or absence of an observer determines how a smear of probability “behaves”? But although not a scientist, I have written speculative fiction for forty years. Science fiction writers learn to extend their imagination.

Lanza: Are there any parts of the novel that you particularly relate to personally?

Kress: I have had one, and only one, transcendent experience in my life, and it is pretty much the one Caro remembers from her childhood, in which for a brief moment she felt drawn into the whole of everything, “woven into the fabric of the universe.” I was not a child but an adolescent, and the experience remains as vivid in my mind now as it was then. It was a direct perception that there is “more” than we commonly think. Such an experience is not scientific in that it is not deliberately replicable nor qualitatively measurable. That does not make it less real.

Lanza: What’s your favorite scene in the book?

Kress: A romantic at heart, I like the final scene between Caro and Trevor. In the spirit of turn-around, what is your favorite scene in OBSERVER?

Lanza: I like the scene in the Epilogue when a seagull flies overhead carrying a starfish wriggling its arms. Kayla activates new, self-controlled algorithms for how her brain processes information. Everything dissolves into a quantum blur and she becomes both predator and prey. “Kayla’s consciousness and the seagull’s consciousness were, of course, manifestations of the same thing, of the Oneness of the universe. Then Kayla was the gull; the gull was she…the warm ocean air rushing under the beat of her wings. Below her, the world spread out in sharp, wide-angled focus, every blade of dune grass separate and distinct, every flash of fish shoals beneath the water undulating in ultraviolet. The faint lines of electromagnetism banded across her senses, pathways in the sky. She sensed minute changes in air pressure: a storm at sea was a few days out from the coast.”

Kress: One achievement in your very impressive career was heading the team that in 2001 cloned a gaur, using skin cells from a dead gaur and an embryo from a cow, with the cow’s womb as surrogate. Why a gaur? And why was the cloned animal named Noah–were you expecting a flood?

Lanza: Yes, and it has already started—about 100 species go extinct every day. We wanted to resurrect a dead gaur not only to prove the technology worked (the embryo and surrogate mom had to be from closely related species), but because the animal had real conversation value. I remember secretly gathering at an Iowa farm out in the middle of nowhere to watch a cow give birth to a rare, endangered bovine perilously close to extinction. I remember seeing his large brown eyes open and his ears wiggle, an adorable baby gaur that looked like a little bambi. The whole thing seemed surreal—watching a beef cow give birth to an exotic, endangered animal that is normally born in the bamboo jungles of Southeast Asia. We named him Noah, who famously built his ark to rescue the world’s animals. BTW, this same cross-species cloning technology is now being used to try to resurrect extinct species ẚ la Jurassic Park, but using real science.

Kress: Earlier this year you moved to Florida, just in time for hurricane season, a hotly contested election, and the discovery of a fifteen-foot-python that swallowed an entire alligator. Do you still like your adopted state?

Lanza: Yeah, although the timing wasn’t so great, was it? I moved here a few months ago and have already been hit by two hurricanes. As you know, I lived on a 10-acre island just outside of Boston for the last 30 years, so I’ve had to swap out swans, eagles, and ducks for pythons and lizards—yes, lots of lizards just like in the book. But they are fun to watch while sipping on a drink under the coconut trees in my backyard. As far as the contested election, politics is always dangerous to talk about ─ it’s a lot safer being in the everglades with the pythons. That being said, I’ve adapted well to the warm weather, so don’t mind swapping all the snow and blizzards for a hurricane or two … at least so far!

Lanza: What message do you hope readers will remember from the book?

Kress: Nobody said it better than The Bard, in Hamlet: “There are more things in heaven and earth, Horatio/ Than are dreamt of in your philosophy.” 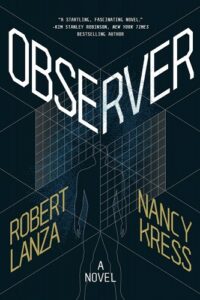 Robert Lanza and Nancy Kress are the authors of Observer, a “brilliant Crichtonesque thriller… [with] a page-turning plot complete with betrayals, violent deaths, and difficult moral choices.” (Publishers Weekly). The book is their first collaboration. Lanza, a scientist renowned for advancing stem cell biology and listed as one of Time magazine’s 100 Most Influential People, was part of the team of three who cloned the first human embryo and the first endangered species.  In addition to writing dozens of textbooks he’s also written three works of nonfiction on biocentrism, the basis of Observer. Nancy Kress, hailed by bestselling author Kim Stanley Robinson as "one of the greatest science fiction writers working today," has won six Nebula and two Hugo Awards for her fiction. She often writes about developments in science, particularly genetic engineering, as in her bestselling novel, Beggars in Spain. Her work has been translated into over a dozen languages, including Klingon. She teaches writing and was "Fiction" columnist for Writer's Digest magazine for sixteen years.

5 Fabulous Thrillers About Secrets Between Spouses 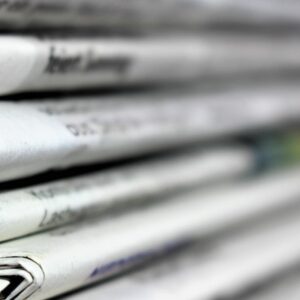 My favorite thrillers are character studies with a crime hook. They’re books about people’s actions, reactions, behaviors,...
© LitHub
Back to top