An infamous night in music history, as told by the creator of Disgraceland, the rock 'n roll true crime podcast.

ELVIS COULDN’T GET THE BULLETS into the chamber: His fingers—swollen along with the rest of his body from a steady diet of greasy, fried Southern food and shaking from his daily narcotics cocktail of antidepressants and pain relievers, morphine, codeine, diazepam, and several other barbiturates—made it near impossible to concentrate, never mind possess the physical dexterity required to properly thread the barrel of his small snub-nosed revolver with the tiny .38 Special bullets. 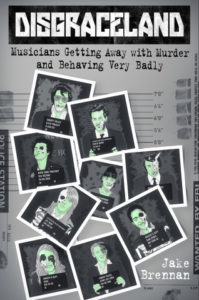 Elvis could feel his temperature rising. He needed to get the gun loaded and get the shot off quick. Who knew how long it would be before the TV gods would deliver that handsome prick’s two-faced mug to his television screen again. The sweat on his forehead puddled above his brow and dripped down the side of his bloated face. The Valium wasn’t working and he needed another kind of release. He’d be up for hours unless he blew off some steam. Blasting Robert Goulet’s shit-eating grin off his face with his .38-caliber Smith & Wesson—the one with the TCB logo and lightning  bolt on the pistol grip—was likely the only chance left to lower his blood pressure tonight.

Goulet. Elvis hated him. Ever since Elvis shipped off to Germany and Goulet, back home, moved in on his girl. The bullet slid into the chamber just in time. THERE! Elvis’s heart practically burst through his sternum at the sight of Goulet onscreen, appearing in an oft-run commercial for the 1977 television show Police Story. Elvis took aim. He held his fire as the commercial moved through B-plot characters before returning to Goulet.

Elvis didn’t want to blow it. The shot had to be perfect. He needed to blast Goulet’s face the very instant it filled the screen, otherwise his anxiety would remain pitched until morning. Sleep would never come, and he’d need to double down on amphet- amines the next day to keep going.  And besides,  at this range, seated six feet away from the big RCA, there should only be one result: the kill shot.

The twin emotions gnawed away, creating a  hole in him that no amount of drugs, women, food, money, fame or Robert Goulet–kill shots would fill.

The sound of the .38’s  blast within the confines of Elvis’s Graceland  den was deafening but definitely worth it. Smoke rose out of the hole in his television where the smug face of Robert Goulet had been just one second earlier. Elvis sunk into himself with satisfaction. The feeling was almost postcoital, but despite the gratification, Elvis Presley, arguably the most popular entertainer in the world, had never felt more alone.

And alone Elvis kept the wolves at bay. Beasts that roamed  freely throughout his drug-addled  psyche, but one beast raged loudest: the thought of his twin brother, Jesse Garon Presley. Dead at birth. And Elvis’s survivor’s guilt was strong. As was his grief. The twin emotions gnawed away, creating a  hole in him that no amount of drugs, women, food, money, fame or Robert Goulet–kill shots would fill.

But if someone was going to save Elvis Presley, they’d better do it fast. It was August  1977, and the King of Rock ’n’ Roll was king in name only. He’d been dethroned long ago by the Beatles, who’d descended like their cousins, the locusts, laying waste to everything before them. Then by sympathetic   satanists posing  as harmless rolling stones but who tumbled him like dice off the charts. And most recently by lean anarchists armed with only three chords and the truth.

Gone were the heady and innocent days of newfound chart- topping success. His early triumph had been fueled by the accidental creation of a new type of earth-shattering music: rock ’n’ roll.

Back then, Elvis’s grip on the nation was firm. The world had never seen the likes of him before. He was the vessel for a new sound. He naturally infused white Southern country music into gutbucket black blues, and in doing so gave rock ’n’ roll a level of relatability (and crossover commercial  appeal) that was undeniable. 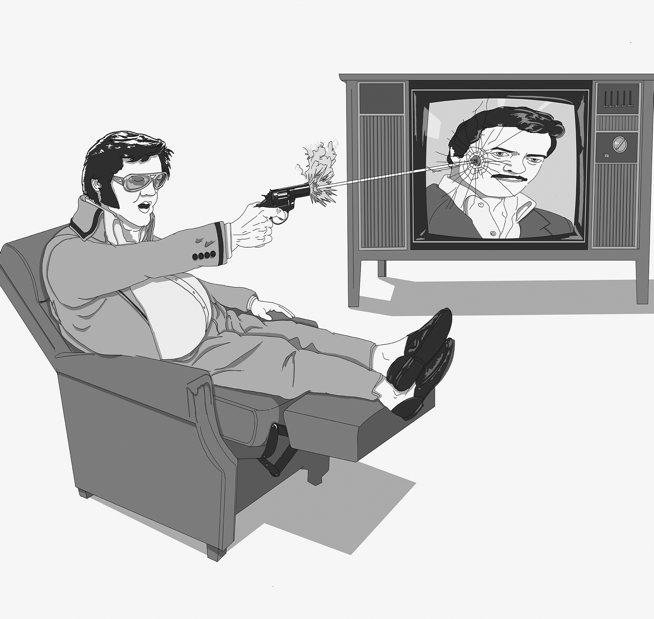 And rolled over Beethoven, Tchaikovsky, and any and all traditional forms of music that got in his way. His first singles lit up the request lines of radio stations throughout the South, and Elvis quickly outgrew his little hometown record label. It was clear, almost from the jump, that Elvis Presley wasn’t just a recording artist. He was a culture-shaping phenom on the make.

Back then in 1955, Elvis was lean himself. To most of America, with his long jet-black hair,  acne-scarred  cheeks, and slithering hips, he was just as alien looking as the punk rockers who now reviled him were in 1977.

In the here and now, holed up in his Graceland mansion den, aka the Jungle Room, Elvis Presley’s kitschy, ostentatious, interior-designed man cave, with its animal prints, shag rug, and faux wood, he felt a million miles away from his humble beginnings despite the fact that he was only a fifteen-minute drive from 706 Union Avenue, the Memphis address of Sun Studio, where he’d gotten his start a couple decades earlier.

Elvis, bored, hit the intercom on the wall and called for Diamond Joe Esposito, an original member of the Memphis Mafia, his entourage, who—among other things—kept him entertained when the need for distraction took hold.

“Joe! Come on down to the den. I wanna shake it up tonight.” Within minutes Joe appeared.

“Joe, let’s party, man. I’m bored. You see those girls outside the gates? Go bring ’em in the house.”

“I’m not talking about all those people. Just the girls. The older girls. We don’t need none of that Jerry Lee nonsense. And tell the boys to get the bar stocked and I want some I-talian food. Call up Coletta’s and get a bunch of them BBQ pizzas. Let’s party, Joe.”

Within no time there were roughly 150 women filling the walls of Graceland to accompany Elvis and the ten members of his Memphis Mafia entourage. Shooting fish in a barrel.

He sat in his chair and fingered his pistol. It gave Elvis a sense of security in these uncertain times.

But Elvis wasn’t interested in shooting fish. He sat in his chair and fingered his pistol. It gave Elvis a sense of security in these uncertain times. His career was at an all-time low. He wasn’t yet broke, but his massive overhead was threatening  to bust his bank. He hadn’t had a top-ten  hit since “Burnin’ Love” five years earlier and hadn’t had real critical acclaim since “Suspicious Minds” shot up the charts in 1969. But even then, nearly a decade before, he was still seen as past his prime. They wouldn’t have referred to his 1968 NBC special as the “Comeback Special” if he’d been reliably ruling his kingdom the whole time. And now, he was a lifetime away from the supernova-star status of his early No. 1 hits “Heartbreak Hotel” and “Don’t Be Cruel.”

Truth be told, Elvis had been creatively spent for the better part of a decade. And physically, he was in the worst shape of his life. To make matters worse, Elvis’s manager had him teed up to embark on a rigorous  tour. It was a tour that he dreaded and was in no shape to do, physically or mentally.

Elvis couldn’t help but wonder why he was in this mess. How did it get to this point? Lonely, running out of bread, and out of shape. He was only forty-two years old. And only a couple decades removed from being the undisputed King of Rock ’n’ Roll.

Excerpted from DISGRACELAND: Musicians Getting Away with Murder and Behaving Very Badly by Jake Brennan. Copyright © 2019 by Double Elvis Media, LLC. Reprinted with permission from Grand Central Publishing. All rights reserved.

Jake Brennan is a Boston based musician who launched, Disgraceland, “a rock ‘n’ roll true crime podcast” in February 2018 to great acclaim. Jake grew up in music. He saw the Ramones play live when he was ten years old and began recording and touring at a young age, first with his band Cast Iron Hike and then with his bands the Confidence Men and Bodega Girls. His songs have been featured in film and television, however Jake thinks his coolest musical accomplishment was opening for Fugazi “back in the day.” He lives in North Boston with his wife and two sons.

Forget Writing What You Know. Write Where You Know. 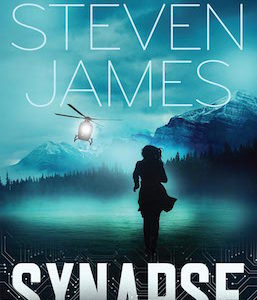 At my apartment, I found that the package from my brother had not yet arrived. No word yet on Ethan’s condition. I...
© LitHub
Back to top