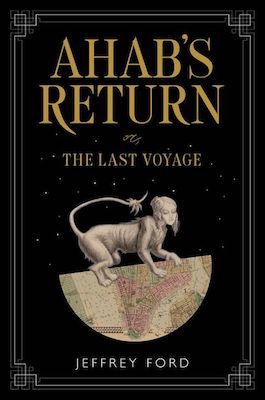 The following is an exclusive excerpt from Ahab’s Return, the debut literary mystery from Jeffrey Ford, which posits that Ahab survives the events of Moby Dick and is later hunted down by a shipmate before the two end up on a new quest that may also prove a pyrrhic effort.

Ahab wasn’t very good at waiting. We sat in my parlor office after dinner, killing time till the clock struck twelve. I, of course, was drilling the captain for anything that might make a suitable article for the series. He stared intently at the picture of his wife and child, and all his answers were grumblings. It was like talking to a beast.

“For instance, what’s the story behind that wicked white scar that runs down the side of your face and neck?” I asked, probing for the light of a tale. “I’ll bet there’s something fascinating at its origin. It’s not from a blade as Usual’s wound was.”

“It runs all the way to the center of the world,” he mumbled. “I never speak of it.”

Finally, I said, “Ahab, come now, help me get your story out into the street. There’s a chance your son might read it. The Mirror gets around, you know.”

He winced, took the pipe out of his mouth, and said, “Very well. Here’s something else. On the voyage home, I was stranded in the town of Sydney in Australia. I made the acquaintance of the harbormaster who got  me in touch with some of the shipowners and captains. They arranged a living situation for me for three months until the next ship that would leave for Boston. I stayed with a woman on the outskirts of town. It was only me and her in the house. Her husband had within the last year gone down with a ship under the direction of a Captain Crevcoure, a fellow known to the international fishery as inept. My benefactors informed me that she was aware I’d lost my entire ship and crew and would not speak to me. Still, she would allow me to live under her roof.

My benefactors informed me that she was aware I’d lost my entire ship and crew and would not speak to me. Still, she would allow me to live under her roof.

“I knew her as Lisle. A pale, frightened woman. Sometimes I’d come in from a morning walk through the countryside and find her hiding, twisted up in the drapes. Every night she cooked fish, clear as glass and the consistency of jelly. We sat together and ate in utter silence. When she thought I was sleeping, she’d slip into my room. I kept one lid cracked the merest slit. She stood over me and watched me breathe. Some nights I was convinced that she would cut my throat. And then she vanished. Days went by and I didn’t see her. I informed them in town that she was missing. They acted like they had no idea what I meant. Some laughed it off as a joke and others just shook their heads. By the time I boarded ship and left Sydney, I realized that they’d sent me to live with a ghost. I saw her again in the mist and spray off the Isle of Treachery as we rounded the Cape of Good Hope.”

Misha stayed up and made us coffee before we went out on our midnight ramble. Wide awake and warm inside, we ventured forth into the blustery night. We headed down to South Street and took a left. Peck Slip was only a few blocks south at the end of Ferry. We stuck to the shadows of the warehouses and shops. Across the way, we passed the docks, some empty, some occupied with majestic clippers and whalers and fishing boats. The wind blew amid the rigging, the spires creaked, empty holds groaned as the vessels rocked. A moon showed itself here and there, fast clouds passing before it. Overwhelming was the scent of low tide. The captain carried his boarding ax at the ready, and I assumed he had his gun. I had my writing satchel. I’d contemplated taking a large knife from the kitchen, but really, why?

We approached Peck Slip in silence and squinted to see in those instances when the moon broke through the clouds. Staring down the length of the dock, I thought I caught some sign of movement. I turned my head to better hear and picked up the sound of voices coming fromthat direction.

“Do you hear them?” whispered Ahab.

I nodded and grabbed the captain by the coat sleeve, leading him back through the shadows of the buildings, nearly all the way to my place. We crossed the road to James Slip. Halfway out on the dock there, I knew we’d find a square hole cut into the planks and a wooden ladder descending toward the waters of the East River. Lashed to a beam of the dock was a dinghy. I’d seen it bobbing there on my Sunday afternoon strolls through the neighborhood.

It was easy enough to find the boat, but getting into it was another story. First, Ahab had to survive the ladder. I closed my eyes every time the tip of that whalebone leg came to rest upon a rung. I promised myself that if he were to fall into the drink, I’d not dive into rescue him. Miraculously, he made it and settled himself into the boat. I followed him down, slipping in my descent and nearly taking a plunge. I wondered if he’d have gone over the side for me. Once we were settled, I deferred to Ahab’s seamanship and let him take the oars.

He held them at a certain attitude so that they cut the water without a sound. Neither of us spoke, and it wasn’t long before his rowing had taken us to the end of the dock and around toward Peck Slip. We headed across some open water and he whispered for me to duck down.

Now we could clearly hear the voices of the men, and I grew somewhat nervous. No one going to the trouble to unload a ship at midnight wants to be seen.

After every two hearty strokes, he’d lift the oars and the boat would glide through the shadows. We came up along the starboard side of the a single boat docked on Peck Slip that night. Its port was against the dock and it was from there it was being unloaded. Now we could clearly hear the voices of the men, and I grew somewhat nervous. No one going to the trouble to unload a ship at midnight wants to be seen.

I put my hand up for Ahab to cease rowing, but he kept moving the boat as if intending to sail around the ship. We swept gently along down the starboard side, and, passing beneath the prow, those clouds traveling across the moon allowed me a split second to read the gilt lettersof the craft’s name—Nemesis.

The frontispiece we drifted beneath was a maiden with wings and empty eyes, holding forth a set of scales. We sailed from the front of the clipper, along its port side. I could see shadowy figures standing above us on the dock and the gangplank. Ahab let the dinghy slip in among the pilings, under the dock, and we finally took up a position beneath where the cargo of the vessel was unloaded. There, we cautiously let out the boat’s small anchor and sat as still as the river would allow.

At first the voices were muffled by the planks, the sound of the wind, and the lapping of the river against the side of the ship. Slowly, though, I was able to discern what was being said. After quite a tramping upon and bowing and squealing of the gangplank, a fellow with a deep, harsh voice yelled, “Gentle with the boss’s pet. If something happens to her, he’ll boil our arses.”

“Damnedest thing I ever seen. Keep ya up at night just think’n about it,” said another.

There were a few moments of silence, and then a storm of scuffling directly above us as if something was struggling to be free. That deep voice called, “Jesus, watch that tail. I told you, a kiss from that stinger, and it’s off to ifreann for ya.”

As they seemed to get whatever the boss’s pet was under control, I heard someone address orders to “Gabriel,” and a young voice answered. The captain obviously heard it, too, and on the second utterance of it, he sprang up, or intended to, but the river sent him a wave that dropped him back on his ass and nearly out of the boat. I grabbed him by the coat sleeve at the last second. The event made a racket and upon hitting his back against the edge of the middle bench, he groaned like a ghost.

From above, we heard, “Wait. Who heard that?” There was a sudden stillness upon the planks.

Ahab tried to prevent me from weighing anchor, but I insisted. He pulled his pistol, and I somehow knew he wouldn’t shoot. Finally, he acquiesced and rowed us along beneath the dock. We drifted over to the starboard side of the Nemesis, passing again beneath the prow. Aswe cut across the open water to James Slip, I took a moment in the ragged moonlight to wonder at the fact that I was sneaking around in a rowboat in the East River after midnight. I shook my head to clear the thought.

Once again back on the dock at James Slip, Ahab grabbed me by the coat sleeve and said, “That was my son. Did you hear him?”

“I’m going to help you get your boy, but I’d rather do it without us getting our throats cut in the process. Have some patience.”

“Very well, enough for tonight. Tomorrow, we look for the Jolly Host.”

“You didn’t hear them saying that? The phrase was invoked three times.”

“Aye,” he said and found his pipe in his left pocket. 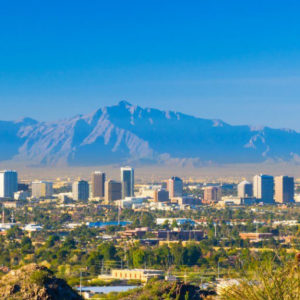 Crime and the City: Phoenix Phoenix can be a surprising city to many of us outsiders to the United States. America’s fifth most populous city and the only...
© LitHub
Back to top