Noir in the Valley of the Sun

Phoenix can be a surprising city to many of us outsiders to the United States. America’s fifth most populous city and the only state capital with over a million inhabitants, it also “enjoys” (an odd choice of word to this Northern European anyway) an unbearably hot desert climate and is known as the “Valley of the Sun”. I spent a couple of days in Phoenix and Scottsdale (part of Greater Phoenix) this past July when the heat hit me like walking straight into a wall. It was mind numbing, totally exhausting, energy sapping. But hey, crime writing aficionado, editor of Phoenix Noir (2009), and bookseller at Scottsdale’s all-crime/all-the-time Poisoned Pen bookstore, Patrick Millikin, tells me “sunshine is the new noir.” He may be right. Phoenix may be the Holy Grail of Sun-Noir: Miami is a little more swampy than sunny while LA retains the lingering after-effects of those German Expressionist refugees who conjured the city’s noir as rainy rather than sunny. Phoenix is all about Sunshine Noir—boiling hot, fry an egg on the sidewalk, sweat through half a dozen shirts a day, Noir.

I thought maybe there wouldn’t be quite enough crime writing to manage a Phoenix edition of “Crime and the City,” but another crime writing obsessive at the legendary Poisoned Pen store, Patrick King, put me straight, gave me a pile of books, and pointed me to a comfy chair right under an air-conditioning unit and next to a refrigerator full of water. I did not move all day.

First up is James L. Thane whose debut No Place to Die (2010) and follow up Until Death (2013) feature Phoenix homicide detective Sean Richardson. Thane reads like Michael Connelly and his Phoenix is detailed. No Place to Die follows the hunt for a serial killer through the city’s shabbier quarters. In Until Death high-class escorts start getting killed and Richardson, now with a partner Maggie McClinton, have to investigate upper-class Phoenix and the city’s ritzy side.

Isabella Maldonado was once a cop herself: a Commander of Special Investigations and Forensics no less. Now she solves crimes in Phoenix through her character Veranda Cruz, a Latina detective in charge of an elite task force on the Phoenix Police Drug Enforcement Bureau. Moldenado’s first novel, Blood’s Echo (2017) pits Cruz against a Mexican drug cartel with family ties and ethnicity throwing up possible conflicts of interest. In the second book in what has turned into a series, Phoenix Burning (2018), Cruz is back tackling the Villalobos family drug cartel while downtown Phoenix is engulfed in a wave of street violence. Moldenado’s novels are essentially procedurals, but her characters’ personal conflicts and her descriptions of Phoenix make the books well worth reading. Veranda Cruz will be back in 2019 with a third novel, Death Blow.

A sub-genre of Phoenix Noir is Desert Noir, out there in those never ending sun-scorched lands surrounding the city. A lot of people retire or relocate to Arizona; for the heat apparently. J.A. Jance is a super prolific writer of mysteries set in Arizona. The J.P. Beaumont series (over twenty five books from Until Proven Guilty in 1985 to Proof of Life in 2017) feature a retired Seattle cop fed up of being rained on so he relocated to the dry heat of Cochise County, Arizona. Jance has also found time to write twenty novels featuring Arizona Sheriff Joanna Brady starting with Desert Heat (1993) up to Downfall in 2016. Then, just in case you thought Jance ever took a day off, there are her Walker Family Mysteries about an Arizona family stalked by a determined and seemingly unstoppable serial killer (five books from Hour of the Hunter in 1991 to Dance of the Bones in 2015). The family keeps expanding—kids, marriage, girlfriends and boyfriends—and the killer keeps targeting them. One ends up wondering why anyone would ever go anywhere near the Walkers!

Betty Webb is another writer who dwells out in the desert. Her Lena Jones series (published by the Poisoned Pen’s own in-house publishing arm) started with Desert Noir (2001). As a child Lena was found by the side of an Arizona desert highway having been shot and consequently lost her memory. Now, as a private eye, she is solving crimes in and around Scottsdale while also trying to discover the truth about her own past. There are now nine books in the Lena Jones “Desert” series, the most recent being Desert Vengeance (2017) and all set in and around Scottsdale. Webb says each of her stories have some basis in true cases and this has meant that a few have been controversial: Arizona polygamy sects (Desert Lost in 2009), female genital mutilation (Desert Cut in 2008), and state benefits swindles (Desert Wives in 2003). The Desert series tackles some tough issues, which probably accounts for why Webb writes a cozy series in between the Desert novels, about a California zookeeper who solves crimes with some help from the smart animals in his care!

And speaking of cozies, no review of Phoenix and Arizona crime writers could forget Jenn McKinlay whose Cupcake Bakery Mysteries are widely regarded as among some of the best cozy writing around. McKinlay is another super-prolific Arizona author (I seriously think they’re all happy to be indoors typing away next to the air conditioner) of mysteries and romance novels. But the New York Times bestselling Cupcake Bakery books—there are ten in all from Sprinkle with Murder (2010) to Wedding Cake Crumble (2018)—have been amazingly popular. They all involve Arizona bakeshop owners Melanie Cooper and Angie DeLaura dealing with both murders and tough cake order deadlines. It seems that Mel and Angie rarely make a delivery of caramel cupcakes or chocolate ganache without encountering a dead body with a sweet tooth.

From cozies let’s go to true crime and one local case that has spawned multiple books. Jodi Arias was convicted of brutally murdering her ex-boyfriend Travis Alexander at his Mesa (just east of Phoenix) home in 2008. Arias claimed she killed Alexander in self-defense, but was found guilty of first-degree murder and sentenced to life in prison. She narrowly avoided the death penalty. It was a sensational case and trial involving alleged abuse, supposed memory loss due to trauma and, repeated trials due to deadlocked juries.

The case has inspired a number of books including Conviction: The Untold Story of Jodi Arias (2016) by Juan Martinez, the prosecutor who convicted her and sparred with Arias across the stand captivating a national TV audience watching at home. Phoenix journalist and true crime writer Shanna Hogan’s Picture Perfect: The Jodi Arias Story: A Beautiful Photographer, Her Mormon Lover, and a Brutal Murder (2014) portrays Arias as a femme fatale and Alexander as a hardworking man and the victim of her obsessiveness. More books, and a made-for-TV movie about the Arias-Alexander case have followed. It rumbles on: just this July Arias, speaking from her cell in the Arizona State Prison Complex Perryville, demanded another retrial saying the first two trials were a “circus,” the prosecutor “played to the audience” (and then wrote his tell-all book), and that the judge failed to control news coverage.

Real life crimes passionels, cupcake-induced killings, serial killers in the desert, dead drug cartel members and high-class escorts, downtown city tensions spiraling into summer violence—that’s Phoenix Noir for you. I say the heat made them all do it! 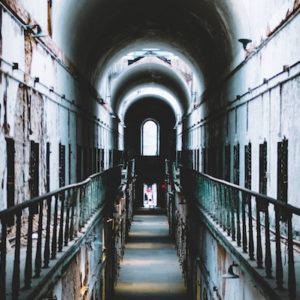 Right now, prisoners in 17 prisons all across the nation are striking for better conditions. They are striking because of economic...
© LitHub
Back to top