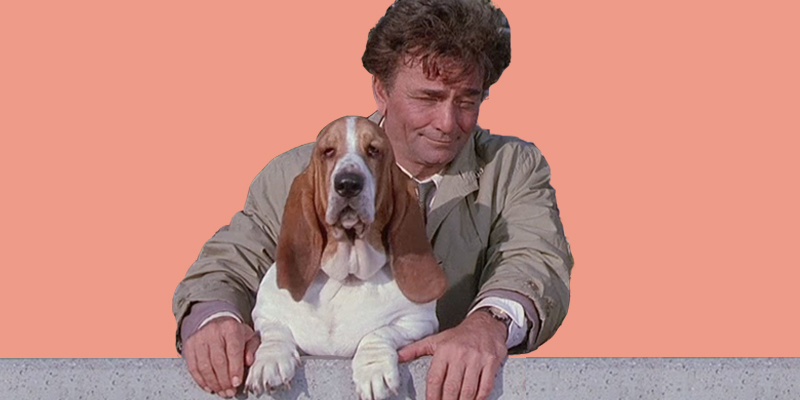 There’s an episode of Columbo I really like to watch. The first episode of the second season, “Étude in Black.” John Cassavetes guest-stars as a conniving orchestra conductor who murders his piano-virtuoso mistress after she threatens to go public with their affair, jeopardizing his marriage to Blythe Danner and the related funding he receives from his mother-in-law Myrna Loy. James McEachin’s in there, as is Pat Morita. As is often the case with Columbo villains, Cassavetes almost commits the perfect crime except for a small dumb error, and he would certainly still get away with the whole thing if any other detective were on duty. Like most episodes, this one is around an hour and a half, the length of a short movie, and even though the list of guest-stars might be a little more exciting than usual (because of Falk’s frequent collaborations with Cassavetes), it’s a fairly regular episode. For a while.

When we first see Lt. Columbo, twenty-four-minutes into the show, after we’ve watched John Cassavetes execute an entire murder plot, we find him in the most unassuming of circumstances. A doctor’s appointment. This isn’t unusual; we often find Columbo doing humble, quotidian tasks. The station calls him in the exam room; he takes the call, promises he’ll be at the murder scene as soon as he’s done at the doctor’s. As he walks back to the doctor, though, the camera pulls back on an enormous, elderly basset hound drooping all over the table. The doctor is giving the dog a vaccine while Columbo looks on, a little uncertain.

“Kinda hard to say,” answers Columbo. “I just picked him up at the pound. His time was up, if you know what I mean.”

Columbo doesn’t know what to name him, but he’s got bigger problems (a crime scene), so he brings the dog with him and keeps him in the car. It takes the whole episode (and several name suggestions) for him to decide what to call his new companion, and it’s ultimately just “Dog”—a duplicitously simple name for a simply duplicitous man, the “Occam’s Razor” of names for the anti-“Occam’s Razor” of detectives.

Falk didn’t want Columbo to have a dog. After one season of flying solo, the network apparently demanded that Columbo find a sidekick, a green detective or someone of that ilk, to bond with and chafe with and solve crimes with. (If you’re thinking about Wilson, you’re on the right track.) But writer Steven Bochco and co-creators William Link and Richard Levinson decided to give him a dog, instead. Falk said he didn’t think it was a good idea, that the show already had its fair share of gimmicks. But after animal trainer Ray Berwick went to the Burbank animal shelter to find Columbo his match and brought back a senior rescue dog named Henry, Falk was sold.

Watching Columbo makes me feel like I’m seven and out getting ice cream with my grandfather.

Henry, the ancient basset hound, evidently passed away after the episode was filmed, and Dog was recast. He would appear in eight classic episodes. In one of them, Falk asks his dog to watch the car while he’s away. “Okay, I’m going to put you in charge. You take care of the car. You’re a responsible dog.” He holds a treat up to the dog’s slobbery mouth. “When I get back, if the car’s OK, [I’ll] give you another cookie.” He pauses, massaging the dog’s head, holding his cigar away from his silky ears. “If the car’s gone,” Columbo adds in a stern voice, “I’ll give you another cookie anyway. Because I love you.” (Obviously, he pronounces it like “ya.”) Dog the dog has previously been expelled from obedience school for “demoralizing the other students” but Columbo doesn’t care.

Right now, Columbo is experiencing a bit of a renaissance. The internet is rife with memes and tributes, fan artwork and interview snippets. Everyone loves Columbo, and why not? (Well, the only reason not to love it is that it’s a cop show and not a PI show. But I don’t want to get into that right now.) The dynamic of the standard Columbo installment is essential to its vibes: a significant portion of every episode is about the committing of the crime itself, and in that way, the series is only a mystery diegetically—only for the characters. We aren’t waiting for someone to show us what happens; we have the answer, and we’re waiting for someone to guess it right.

Columbo is a detective who thinks and feels and makes these abilities work together. He’s a softie and he doesn’t hide it. He’s chatty. He’s curious. He’s sympathetic. And through all these things—or actually because of them—he manages to uncover details no one else can see, catch people in lies and cover-ups. He’s rumpled, he’s crinkly-eyed, he’s short, he’s got that cigar-choked New York accent. He’s perfect. There’s nothing more satisfying than when his blue-collar identity or working-class accent are underestimated by a snobbish culprit. When Columbo takes somebody in, it often feels like a pushback against the tyranny of the upper-crust.

Watching Columbo makes me feel like I’m seven and out getting ice cream with my grandfather. Or really, either of my grandfathers—one of whom was a nutty English-Italian-American mechanic, a mad genius who lived in New York City his whole life, and the other of whom is a jolly dog-lover who has seen every episode of Columbo like twelve times. “Do you love Columbo?” I asked that grandfather in preparation for writing this article. He answered, “Oh yeah!” “Do you remember he has a dog?” I asked him. He answered, “I forget.”

To me, like many of us, Columbo feels cozy and homey. Maybe it’s because, for me (like, again, many of us), I was introduced to Peter Falk when he played the waggish grandfather reading the storybook to his sick grandson in The Princess Bride, from 1988. I saw him next as Jack Lemmon’s dimwitted assistant in Blake Edwards’s million-hour feature The Great Race from 1966, where I learned how talented he was at yelling. And somewhere along the way, I saw him in The In-Laws (1979), in which he plays an absurdly calm operative roping his neurotic future in-law Alan Arkin into a high-stakes burglary with international implications. There was a small role in Murder By Death, which I saw too young, and a smaller role in The Great Muppet Caper, which I saw when I was too old.

As an adult, now, I’ve seen much of his filmography. In nearly every role, Falk brings an ineffable lightness, a preposterous calmness, and thoughtful wryness. Perhaps most memorably, due to Columbo, he’s chomping on a cigar or turning around slowly to ask just one more question. But in general, Falk is an incredibly memorable performer, and simultaneously so difficult to describe. There’s a near-godliness to his dry quirkiness, his cheerful normality.

I find it interesting that the German filmmaker Wim Wenders seems to have been moved by Falk’s ineffable, perceptive persona; he cast him as a version of himself in Wings of Desire, a film about angels floating around Berlin, unable to meaningfully interact with humans but longing to experience the joys of a physical life. Falk’s wise alter-ego is able to feel this world. “I can’t see ya, but I know you’re here,” he says. “I feel it! You’ve been hangin’ around since I got here. I wish I could see your face. Just look into your eyes and tell you how good it is to be here. Just to touch somethin’.”

Falk, “der filmstar,” has it all figured out. He often plays characters who do—or, at least, who don’t seem worried or anxious. His characters, especially Columbo, often do things at their own paces, notice things others don’t, give themselves space to feel things deeply. Maybe this is why Columbo is so appealing to me—he comes off as present and relatively unconcerned, all the while caring very deeply about what goes on. He manages to be genuine and unruffled at the same time.

Of course, as an actor, Falk played with these associations self-consciously. In movies like Elaine May’s masterpiece Mikey and Nicky, it’s precisely his unconcealed care and concern for his friend Nicky (Cassavetes), that builds the film’s central tension. In A Woman Under the Influence (directed by Cassavetes), his humbleness actually feeds his crassness, ignorance, and antagonism.

But there is no compromising the purity of Columbo, which features a lead performance so simultaneously nuanced and straightforward that it beguiled audiences for ten seasons, and then a handful of specials extending from 1991 to 2003. But I like the episode where he gets the dog the most; the character hadn’t been fully figured out until then, not for the whole first season. It’s essential to Columbo that he has love in his heart, that he’s gentle and generous to the point that he’s willing to change his whole life because he’s found that a dog will die unless he does. Like many mysteries that focus on a new case each time, Columbo is about smallness. It is about people’s lives, and the impact that people’s choices can make. Each murder ends a life, ruptures a family, changes things for a small group of people. In Columbo, most people kill because they are avoiding consequences, trying to take the easy way out, cannot curtail their own emotions to the point of drastic measures.

I’ve heard a million times that saving a dog won’t change the world, but it does change the world for that dog. I think about this whenever I watch Columbo and Dog appears. Columbo talks to him like he’s a person, has full conversations. He buys him his own ice-cream cone, talks about him when he’s not around, wonders if he’s all right because all he does is lay around the house all day. Dog loves watching TV. Dog loves going to the park. Columbo gets to know him. They have a real friendship.

Columbo’s job is demoralizing; he arrives at the ruins of a life, of a couple, of a family, of a community and has to figure out what—who—caused the destruction, who was driven by their own feelings to do something impossibly cruel and damaging. His job isn’t to make the world better; in fact, its existence is predicated on the probability that it won’t get better. But Columbo, the man, does want the best for everyone. He wants to love. He wants to help. He wants to build a better world.

Just one more thing. If nothing else, Falk is an ace at projecting sincerity, security, serenity. This is, I think, why he feels so grandfatherly to me (not even because we watch Columbo age into grandfatherliness throughout the course of the character’s run). Falk is one of those few actors I find comforting enough to watch right before bed. I won’t go so far as to say he’s the equivalent of a bedtime story, but I will say that he’s very good at making everything all right again. And if he tells me that everything will be all right in the morning, I’ll believe him, kiss my dog goodnight, and I’ll sleep just fine. 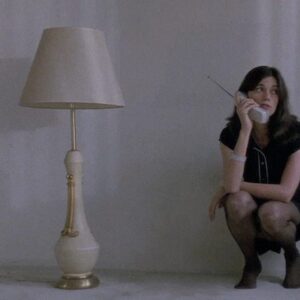 How much we love the “perfect murder.” (Talking fiction here. Right?) It means many things to many people. Just getting...
© LitHub
Back to top