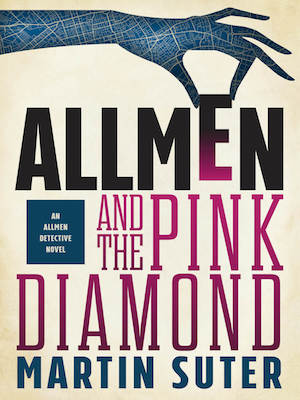 The following is an exclusive excerpt from Allmen and the Pink Diamond, the anticipated follow-up to Allmen and the Dragonflies, which introduced gentleman thief Johann Friedrich von Allmen and his Guatemalan butler, Carlos, a duo that has returned to investigate the disappearance of an invaluable pink diamond.

Allmen was nervous. The receptionist would announce Montgomery’s arrival at any moment.

He was sitting behind a mahogany desk in an office at Grant Associates in Knightsbridge. Through the window, flanked by heavy curtains, he could see Hyde Park and the cars on South Carriage Drive.

It was thanks to the care he took in maintaining his network from earlier, better days that he’d been able to use this office for the meeting. This time it was an old classmate from Charterhouse who had come to the rescue, Tommy Grant, a good-natured, somewhat ponderous fellow. As family tradition dictated, he had become a lawyer, and was now senior partner of Grant Associates, a prestigious law firm in its fourth generation.

Tommy had been delighted to receive Allmen’s call, had invited him to dinner with his boring wife and his two bored, teenage sons, and was now happy to lend him this office for a day. Or two, or three. Since his father had retired from active participation in the firm, the room was only used a couple of times a year.

And so he was able to receive Montgomery in the imposing premises of this traditional firm, an invaluable boost to Allmen’s mission to propel Allmen International Inquiries to its long-sought international breakthrough.

In the two years since its founding, its field of operations had been limited largely to Switzerland. And to rather small-scale cases, none of them approaching the sums involved in the spectacular recovery of the dragonfly bowls, mainly involving pictures and objets d’art in the five-figure range, from clients in the art and antiques sector.

Carlos had created the website allmen-international.com on his secondhand computer. Allmen had written the copy and determined the look. The homepage had a flannel-gray background. Right at the top of the screen, spaced evenly across the width, were the names of the five cities, in an elegantly proportioned, classic silver Antiqua: New York, Zurich, Paris, London, Moscow. Beneath them, a little larger, “Allmen International Inquiries,” followed by the slogan Allmen was rather proud of: “The art of tracing art,” solely in English, as it didn’t translate so elegantly into German.

This somewhat grandiloquent Internet presence couldn’t disguise for more than a glance that Allmen International Inquiries hadn’t yet managed to distinguish itself from a shady, backroom detective agency.

The agency’s income came largely from the hourly rates they charged their clients, with occasional commissions on successful finds, and a small percentage of the recovered items’ value, correspondingly modest.

For Carlos this income nevertheless allowed him to reduce his day job as gardener and caretaker for the trust company that had bought Allmen’s Villa Schwarzacker to a part-time position. But in terms of Allmen’s lifestyle it was peanuts. He was frequently forced to sell off items from his collection of fine objects. And soon he would have to return to cashing in items he had acquired in other ways. Whatever, wherever.

That was why everything had to be in place for this meeting with Montgomery.

“Will you see Mr. Montgomery, sir?”

Allmen jumped. The voice came from the old-fashioned intercom, set at a high volume for Mr. Grant senior, who was hard of hearing. He pressed the worn talk button and had him sent in.

Montgomery was a shade younger than Allmen, late thirties perhaps. He wore a well-cut business suit and had a suntan, his cropped hair prematurely gray. He entered the room confidently, without looking around, as if he were used to such interiors.

Allmen stood up as he entered and walked toward him. As they greeted, he registered that his guest did not speak the kind of upper-class English his appearance might have suggested.

He offered him an armchair, part of the matching heavy leather furniture, and sat opposite.

Montgomery declined. He placed an angular, battered executive case on the table in front of him, opened both locks, and extracted a thin folder. Then he looked Allmen in the eyes.

Montgomery’s eyes were a watery blue. In the whites around the iris were a few black specks of pigment, which made it hard for Allmen to hold his gaze.

“How long do we have?” was Montgomery’s first question.

Allmen responded in the same businesslike tone. “That suits me too.”

Montgomery got straight to the point. “I’m sure I don’t need to repeat that everything I tell you today is strictly confidential.”

“Par for the course,” Allmen said.

Montgomery leaned back in the armchair. “A pink diamond. Do you know what I’m talking about?”

Allmen, an avid reader, had followed the recent story in the papers about the auction of a pink diamond at the Swiss branch of Murphy’s. The stone had fetched a record price.

“Yes. One recently went to an anonymous bidder for over forty-five million Swiss francs.”

“Thirty million pounds.” Montgomery left a meaningful pause before saying, “The man is my client.”

“I see. The diamond has disappeared.” This sounded like an assertion, as if the information was not news to Allmen.

Allmen took a sheet of Allmen International Inquiries stationery, lying at the ready, and wrote “Meeting Montgomery,” along with the date and location, just below the letterhead. Then he looked at Montgomery in anticipation.

The latter leaned forward, resting his arms on his thighs. “I’m not allowed to disclose the details. But I’ll say this much: my client held a private reception in one of his villas, at a location that’s irrelevant to our purposes. His wife was wearing the diamond. Next day it was no longer to be seen.”

“I’m not allowed to disclose the details. But I’ll say this much: my client held a private reception in one of his villas, at a location that’s irrelevant to our purposes. His wife was wearing the diamond. Next day it was no longer to be seen.”

Allmen waited, poised to note something.

“I know it’s not much,” Montgomery said.

“And how should we …” Allmen spoke in the plural when alluding to his multinational enterprise. “How are we to find the item without a single clue?”

“We are carrying out investigations in my client’s immediate surroundings ourselves. But now we have reached a point where we believe it makes sense to bring in third parties.”

Allmen was still waiting for something worth noting down.

“We have identified the go-between.”

“And why don’t you have him arrested?”

Montgomery reached into his jacket and took out a packet of cigarettes. “Do you mind if I smoke here?”

Allmen, who tended to describe himself as a non-practicing smoker, hated it when people smoked in his personal space. But he had never answered such a question in the affirmative. He expected his smoker guests to be tactful enough not to ask. But now the question put him on the spot. Tommy Grant had specifically requested that he not smoke in the office, out of consideration for his father’s asthma.

He was still wondering how to reply as Montgomery slipped the cigarettes back in his pocket, without a word. “Two reasons why we aren’t having him arrested. First, my client doesn’t wish to involve the authorities in the search for something he never officially owned. Second, the man has gone underground.”

Allmen nodded. This explanation seemed plausible. “And when we find him? What do we do, if you don’t wish to get the authorities involved?”

“When you’ve found him, follow him and let us know. Then we’ll discuss the next stage.”

Montgomery handed him the folder he had been holding in his hand the whole time. It contained a sheet of paper that looked at first glance like a resume. It bore the header “Artyom Sokolov.” A photo was attached to the top right corner with a paper clip. It showed an emaciated man with thinning, combed-back hair and sunken eyes.

The information was scant: Born 1974 in Yekaterinburg, around 6’2” tall, 187 pounds, medium blond, studied electrical engineering, degree in computer science, worked as a freelance IT specialist. Last known location Switzerland, and there was an address: Gelbburgstrasse 13, Apt. 12, 8694 Schwarzegg.

Allmen looked up from the paper and met Montgomery’s eyes, which must have been fixed on him as he read this brief information. “How did you hear about us?”

“I made some inquiries. Your track record impressed me. The dragonfly bowl case above all. The police search for the best part of a decade for them; your agency finds them in seconds—respect.”

Allmen let the sentence echo in his head to see if it sounded ironic. He decided it didn’t. 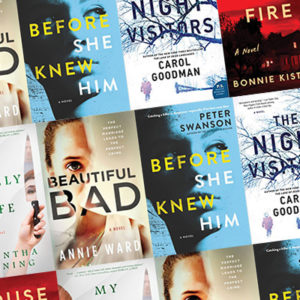 March's Best Psychological Thrillers This month in psychological thrillers we have all sorts of family dysfunction, and one case of a nosy neighbor. Wicked wives,...
© LitHub
Back to top