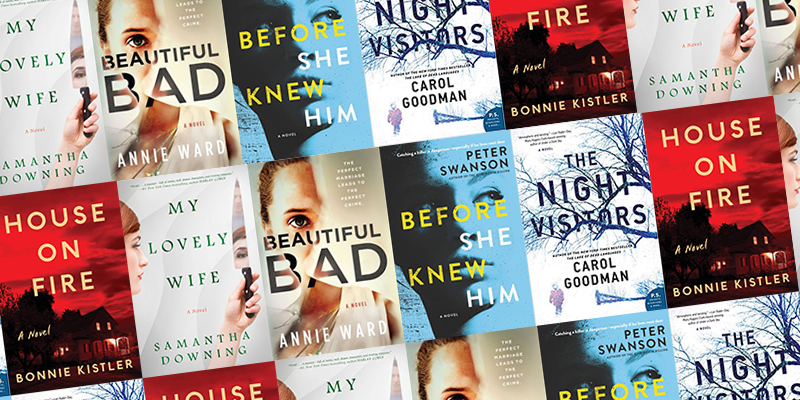 This month in psychological thrillers we have all sorts of family dysfunction, and one case of a nosy neighbor. Wicked wives, evasive husbands, abused women, and a family torn apart by a drunk driving accident feature in the titles below.

Given the popularity of domestic suspense it’s not surprising that writers are starting to subvert expectations of what the genre can do. To wit, we’ve seen a number of domestic suspense novels told from the male point of view, in which the couple is in cahoots or the woman—or wife–is gaslighting her man. My Lovely Wife takes this premise to an extreme, and it’s a fantastic read. Wife is a stunner of a book. Read at your own peril and pleasure. 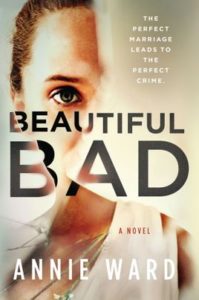 Beautiful Bad is an unusually structured and resonant psychological thriller, playing clever games with time, place, and point of view. At the center of the book is Maddie, a sometime expat now living with her husband, Ian, and their son, Charlie, in suburban Kansas. When the story begins, however, Maddie is teaching English in Bulgaria, while her best friend, Jo, is doing relief work in the small country next door, Macedonia. Jo and Maddie meet Ian and his friends at an expat bar while Maddie is visiting Jo, and the book traces the rocky path of Maddie and British mercenary Ian’s romance and marriage. In the present day, Maddie is seeing a therapist to try and work through a trauma by writing about her past–but it’s her past that threatens her family’s present happiness. 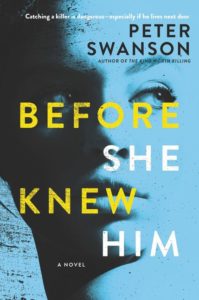 Before She Knew Him, by Peter Swanson (William Morrow)

Peter Swanson writes excellent suspense novels with terrible titles. Before She Knew Him centers on artist Hen (short for Henrietta), who has moved to a quiet Boston suburb with her husband, Lloyd. When their neighbors, Matthew and Mira, invite them over Hen fixates on a knickknack she swears is connected to an old murder of a teenage boy who happens to be a student at the prep school where Matthew teaches. Is she right to be suspicious of her neighbor, or is Hen’s bipolar disorder flaring up again and affecting her judgment? 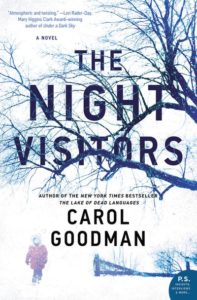 A woman and her son board a bus in a snowstorm late at night, escaping we don’t quite know what but it’s easy enough to guess: an abusive man. But this is Carol Goodman, and her upstate New York set thrillers always have a touch of the gothic. Goodman drew on her own experience at a hotline for victims of domestic violence, and the Night Visitors has a chilly realism to it. Will the woman, Alice, and the boy, Oren, be safe at the house of volunteer Mattie, a gigantic rundown place in the middle of the woods? Why does she take them home instead of to the shelter as planned? And is there some reason why Oren reminds Mattie so much of her brother who died when he was only 10? 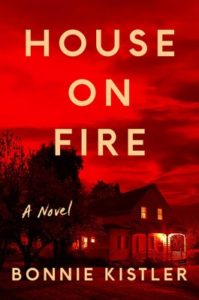 Leigh Huyett, a divorce lawyer, knows plenty about the pitfalls of blended families, but she never suspects the stress her own will face. Her teenage daughter, Chrissy, is killed in a drunk driving accident and the driver is her husband’s son, Kip. With Kip charged with manslaughter and their family in ruins, Leigh must somehow keep her family together despite her intense feelings of confusion and loss. There is a wrinkle, though, that changes everything: Kip claims that Chrissy was the one driving and there is a witness who will back up his story. 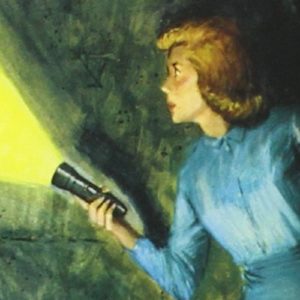 It’s no longer a secret that Carolyn Keene, the hardworking, prolific, zippily-named and incredibly long-lived author of the “Nancy...
© LitHub
Back to top