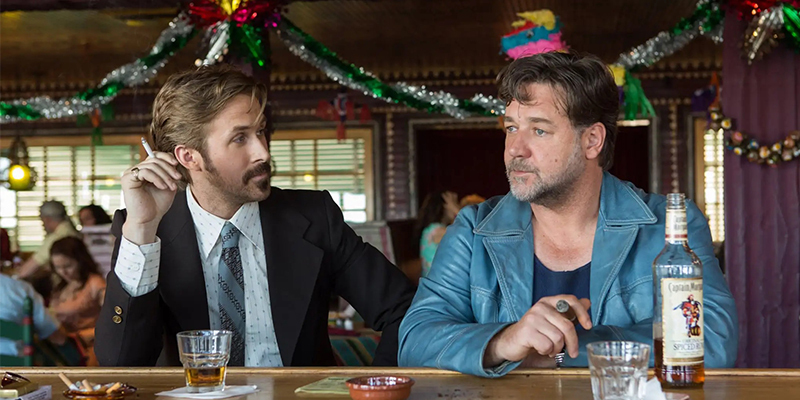 Okay team! It’s time for us to round up crime movies which also happen to be set during the Christmas season but are not really, technically “Christmas movies.” As I explain EVERY year, when I make another one of these lists, these aren’t movies like Die Hard or Bad Santa or Lethal Weapon or the new Violent Night: famously crimey and obviously seasonal for having a “Christmasy” backdrop. NOPE! These are the movies you don’t always remember are even set at Christmas. In December 2018, our editor Dwyer Murphy assembled ten thrillers that might surprise you with their holiday settings, and in December of 2019, I added ten more. And then in December of 2020, I added another ten more, and then last year, I added another ten more! (So, folks, if a movie isn’t on here and you think it should be, check the other four lists.) We also have a list of the ten MOST obvious crime movies set at Christmas, if you’re looking for the L.A Confidentials or the Kiss Kiss Bang Bangs.

So, yes, for the FIFTH TIME in as many years: here are another ten more crime movies you might have forgotten take place at Christmas! 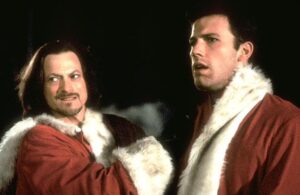 Ah, Reindeer Games. In this late John Frankenheimer crime movie, Ben Affleck plays an car-thief ex-con who assumes the identity of his deceased cellmate so that he can get with that guy’s attractive prison pen-pal Charlize Theron and as a result, finds himself embroiled in a Christmas Eve casino heist with her gunrunner brother, Gary Sinise, who does not know Ben Affleck is an impostor and therefore thinks he has the skills to be their ringer. Hark. 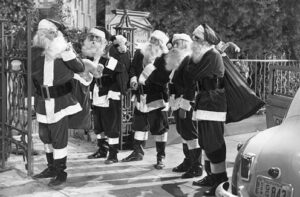 This genuinely depressing noir is about a WWII veteran named Joe Miracle who comes back from the war to find that his nightclub has fallen under the control of the Polish mob, and his business partner has gone missing. He robs them and hides out until he can flee the country on Christmas Eve, the next day. In the meantime, he also dons a Santa Claus costume as a disguise to conceal his identity from the mobsters. 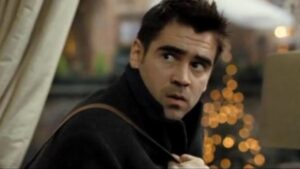 Yes, Martin McDonagh’s black comedy, about two hitmen hiding out in the ancient city of Bruges, Belgium after a bungled job puts their employer in jeopardy, takes place during the holiday season! There are lights and tinsel everywhere, behind all the flying bullets and sulking assassins. 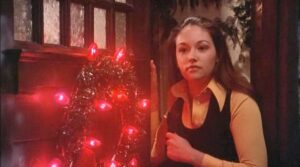 Yes, fine, maybe you didn’t forget that “Black Christmas,” a movie with the word “Christmas” in the title, takes place at Christmas. But maybe you forgot it existed at all. Or maybe you never heard about it, despite it being the first bona-fide slasher movie in American history. It is a horror movie but it’s definitely crimey in a Ted Bundy kind of way, about a sorority house terrorized by a serial killer during winter break. It stars Romeo and Juliet‘s Olivia Hussy and 2001: A Space Odyssey‘s Keir Dullea. (And don’t expect it to conform to present-day slasher rules.) 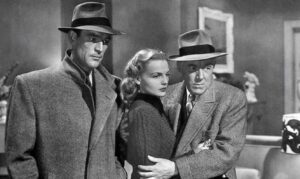 This noir, based on the Cornell Woolrich collection of the same name, is about a frustrated, impoverished dancer who throws his shoes out the window one night, and then becomes a murder suspect after his distinctive shoe-prints are found at the crime scene. With his execution scheduled for Christmas Eve, he doesn’t have long to find the true killer. That’s merry for ya. 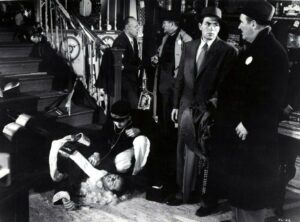 Are you in the mood for a Mike Hammer movie set at Christmas? Yeah, I thought so. This adaptation of Mickey Spillane’s debut novel is bone-cold and chilling (and not just for its wintery setting). It’s also features the world’s most noir fate of a certain department store Santa Claus. 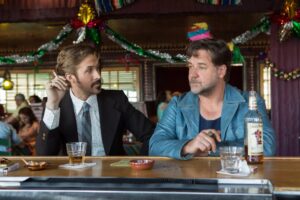 Shane Black sets a lot of his movies at Christmas (see the other lists in this series), and this includes his recent (and underrated!) 70s buddy-comedy The Nice Guys, starring Ryan Gosling and Russell Crowe as an unlikely pair of investigators: PI Holland March and enforcer Jackson Healy. Yes, the Christmassy themes in this movie might be more subtle than in Kiss Kiss Bang Bang, Iron Man 3, or Lethal Weapon, but they’re there! It’s Christmastime in Los Angeles when March and Healy take up their case. The whole town is covered in tinsel “and stuff.” 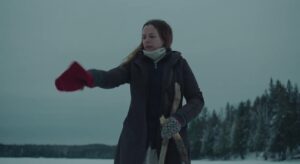 Riley Keough plays a woman who is snowed-in with her fiancé Richard Armitage’s two kids, Jaeden Martell and Lia McHugh, in a cabin in a holiday vacation village. But then freaky stuff starts happening that reminds her of her very upsetting childhood. Fine, this one’s horror too. 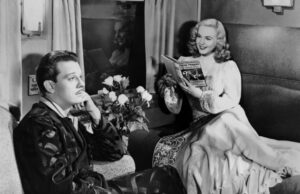 Deanna Durbin stars in this film as a young San Francisco debutante who loves mysteries and who boards a train to New York at Christmastime only to see a terrible murder through the windows of her car. Luckily, there’s a mystery writer on board who can help her figure out the identity of the killer! This movie features a very nice rendition of “Silent Night,” if you like your crime movies to feature carols. 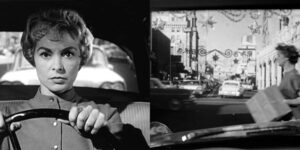 What? Yes, friends… Psycho takes place at Christmas! Marion Crane steals the money from her boss on Friday, December 11th. But more than that–while she is driving through the streets of Phoenix, the camera captures a reverse shot of her view from the windshield, and the city is covered in Christmas decorations. Stephen Rebello, author of Alfred Hitchcock and The Making of Psycho, noted in the film’s DVD commentary that this was not intentional; the opening scenes were shot on location in Phoenix in December, and the city was decked out in tinsel for the holidays, meaning the film had to write the setting into the story. But I think it works, thematically, anyway; you can’t deny that Psycho is a film about the whole family coming together at the holidays! 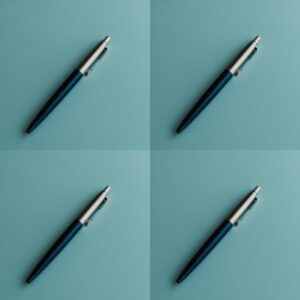 I’ve never been one for “year-end” lists.  If I had to guess, I’d say it’s because I’ve always been too busy...
© LitHub
Back to top