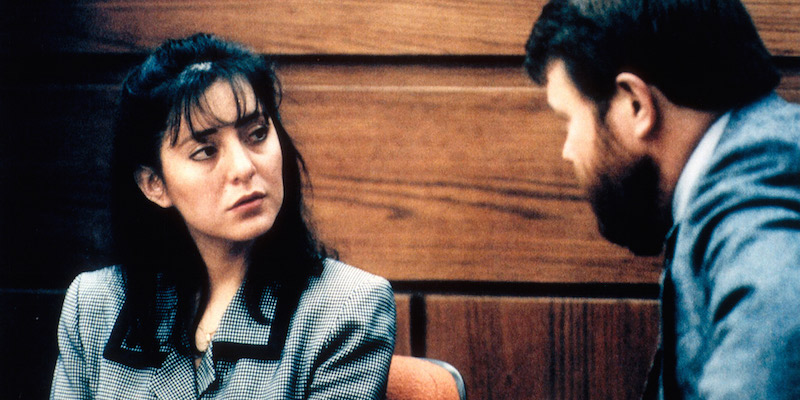 To watch Lorena, the four-part docuseries on Amazon about the case of Lorena Bobbitt and her husband, John Wayne Bobbitt, is to be immersed in the not too distant history of how we think about domestic violence. The series starts with the primal cut: on June 22, 1993, after Bobbitt came home drunk and raped his wife, she went to get a glass of water from the kitchen, then takes a knife and slices off her sleeping (or blacked out) husband’s penis. She has no memory of the incident, but does remember taking the severed member with her, throwing it out the car window into a field, and driving to the manicure salon where she worked and sleeping in the parking lot in her car. There is a supremely awkward moment in the series where John stands in the field where his penis was found alongside the first responders who brought it to the hospital to be reattached. It’s one of the few moments where he seems contrite in a story in which he is undoubtedly the villain.

The uproar in the wake of Bobbitt’s act of marital vengeance divides too neatly along gender lines. The male talking heads in the series—and men at the time—fumble over and over to describe the horror of what she did, as if there is no worse fate imaginable for a man. Women see the incident quite differently. Instead of expressing disgust over what Lorena did they ask what led up to her grabbing that knife. Women understand there is a narrative behind the act, a story of repeated battery, assault, psychological belittling, and rape that pushed her to do what she did. Where men see a horrifying isolated incident, women understand this is merely a sensational plot point in the terrible but familiar story of an extraordinarily abusive relationship.

The most remarkable thing about Lorena is Lorena herself. Now remarried with children, her face is softer, her hair straight and blonde, and she exudes a quiet confidence. Her clothes are tasteful, her makeup understated and flattering. This woman looks and sounds nothing like the woman who testified in two trials: one in which John Babbitt was charged with marital sexual assault and acquitted, and her trial for malicious wounding, a charge of which she too was acquitted. On the stand, especially in her trial, she was understandably emotional, frequently crying as she described her horrendous marriage (the police were called six times in response to the couples’ fighting). Yet she is never out of control, never hysterical. John Babbitt claims she hit him too, but there’s no doubt where the real violence originated. Neighbors, friends, even one of her manicure clients describe Lorena’s bruises and other injuries. But the Lorena Bobbitt of the 1990s was not this self-possessed woman we see being interviewed. Her hair was dark and plentiful, with long bangs and curls cascading down her back. Her clothes were simple but cheap looking, and she had yet to master the nuances of English. But there is no way to watch her testimony and not be moved: she frequently cries as she relates incident after incident of beating, arguing, battery, and rape.

Of course, no marriage starts out this ugly. John and Lorena met at a dance for enlisted men—John was a Marine at the time, Lorena was a young woman from Ecuador via Venezuela who had come to the US for a better life (because of her ethnicity, she was called a “hot blooded Latina woman” and similar by the press). She was living with family friends and learning English by watching soap operas. They dated for ten months and married when Lorena was only 20. “I was in love with him,” she says simply. All of their dates had been chaperoned, and as Lorena was a strict Catholic, they did not have premarital sex. John had trouble keeping a job after he was discharged from the Marines, while Lorena worked as a manicurist and body waxer at a local salon near their home in Manassas, Virginia. But Lorena doesn’t dwell on the couple’s good times, if there were any. Instead, it offers an instructive backdrop in American gender politics in the early 1990s: Clarence Thomas’s confirmation hearings, in which Anita Hill’s very specific and disturbing allegations of sexual misconduct were dismissed and Thomas became a supreme court justice. Then there was the William Kennedy Smith rape trial, which ended in Smith’s acquittal despite damning evidence and testimony. There were widespread allegations of harassment and sexual misconduct in the US military in 1992. And then came Lorena Bobbitt.

Article continues after advertisement
He said if she tried to leave him he’d have her deported or kill her. Terrified, she believed him.

When the marriage went sour, it really curdled. John hit her frequently. He threatened to have her deported if she tried to leave him. He forced her to have sex—particularly anal sex—against her will. When she became accidentally pregnant and wanted the baby, he forced her to have an abortion. Given Lorena’s Catholic beliefs, she says, “Divorce was a failure.” Meanwhile, John’s friends recall him saying that he liked to “make girls squirm and yell and make them bleed and call for help,” and that “forced sex turned him on.” Lorena became terrified of her husband. All of the classic tropes of abuse appear: she thought he would change. He said if she tried to leave him he’d have her deported or kill her. Terrified, she believed him.

Though the incident is described right in the beginning of Lorena, it understandably colors the whole series. Babbitt alternates between direct talk and being a study in euphemism. When it’s time for Lorena’s lawyers to mount a defense during her trial, one of them says, “It was from his penis that she could not escape.” Lorena is a study in castration anxiety. The filmmakers do a good job of recreating the media hysteria around the case, both at the time of the incident and later on: one of the talking heads worries that Bobbitt might have to sit down to urinate like a woman, as if that were the worst fate imaginable for a man. Another man claims that when the surgeons reattached Bobbitt’s penis, they “restored his dignity.” Bobbitt’s brother claims Lorena’s crime was “a fate worse than death.” Much debate occurs around Bobbitt being a selfish lover, as if that were a good enough reason for Lorena to do what she did. Thus, the phallus literally embodies the masculinity Bobbitt uses against his wife, as well as the crime she has committed against him, and if you believe the media hysteria, a power other women could exercise against the abusive men in their lives. Lorena recalls overhearing a woman say, “Somebody finally did what I’ve always wanted to do.” That woman—and there are many others in the documentary—was speaking for untold others who’ve fantasized about escaping real phallic power.

The Bobbitt case also became a media sensation because it coincided with the advent of the 24-hour-news cycle and tabloid TV. No cameras were allowed in John’s trial, but they were permitted in Lorena’s. Although she was offered a plea deal, Lorena refused to take it as she feared it might jeopardize her immigration status, and if she copped to a felony she could never become an American citizen; instead, she faced up to 20 years in prison. Lorena’s case introduced the world to battered woman syndrome as a defense. Since her lawyers had to prove she acted on an irresistible impulse, they trotted out expert witnesses to explain the state of mind of a woman who had been brutalized by her husband. The defense asserts that battered women suffer from PTSD and low self-esteem. They are afraid not just of what their husbands are inflicting on them in the present, but that there is no escape, no future without abuse. The battered woman sees no way out, and she’s not wrong: of the women who do leave abusive relationships, they are most likely to be killed by their abuser within the first six months of doing so. While the state argued Lorena’s crime was a “calculated act of revenge,” the defense was “she snapped” because of cumulative abuse. Lorena prevailed (she was a “good witness” according to one of the lawyers, meaning she did not seem crazy on the stand), but because she used a psychiatric defense, she had to be locked up in a mental hospital, the Central State Hospital Maximum Security Forensic Unit, for 45 days. One of the lawyers described it as an “old time psych hospital …sort of like a jail.” To leave, she had to be cleared by a psychologist and psychiatrist. John Bobbitt, after his acquittal, just walked away.

To leave, she had to be cleared by a psychologist and psychiatrist. John Bobbitt, after his acquittal, just walked away.

Head of the National Network to End Domestic Violence Kim Gandy says, “The Bobbitt case came at a time when the criminal justice system didn’t take domestic violence and sexual assault seriously.” People working on domestic violence seized the Bobbitt trials as a way of working the neglected issue into a public dialogue. Time Magazine put a pig in a business suit on its cover with the headline, “Are Men Really That Bad?” Joe Biden introduced a bill to combat domestic violence called the Violence Against Women Act, which was passed several years later. It was the first piece of legislation to allocate funds for things like women’s shelters.

So, in that way the Bobbitt case was a victory for abused women. And as Lorena got out of the spotlight and into a quiet life as quickly as she could, John Wayne Bobbitt continued to trade on his notoriety. He became a regular on the Howard Stern show. He got a penis enlargement. He did porn. He was charged with abusing his next three girlfriends. He begged Lorena to get back together with him in letters and text messages (he even sent her valentines), saying they could make a lot of money if they reconciled and had a baby. He worked for a while in a brothel called the Bunny House as a kind of greeter, or mascot, until the owner and the prostitutes got tired of him. As one of them says, pretty much summing up the Bobbitt case, “Cut a million clits off in Africa, and nobody hears a word. Cut one dick off, and the whole fucking country stops.” She pauses, and adds with more than a hint of resignation, “It’s a man’s world.” 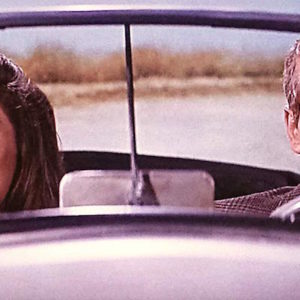