When I heard that Philip Kerr had died, my first grief (forgive me) was for his character. I’ve known Bernie much longer than I ever got to know his creator. My second grief was knowing that I would never have a chance to get to know Philip Kerr better. I met him a few times at the bookstore where I worked in Austin. Kerr loved Texas, and he and fellow Texas-loving Brit Mark Pryor enjoyed hanging out and going to the shooting range whenever Kerr was in town. Pryor is an Austin-based prosecutor who writes crime novels set in Paris; Kerr was a former lawyer who became fascinated with the Nazis precisely because so many powerful members of the party had a role in the legal system. It was through this friendship, that I witnessed from afar, that I got a brief glimpse of the person behind the series.

I first picked up the Berlin Noir trilogy in high school. While I was initially hooked by the colorful slang (guess what “mouse” refers to) and the plausible death toll, I grew to love the series as a still entertaining but more complex organism. With the Bernie Gunther series, Kerr perfected the “small crime within a larger crime” historical mystery, and in the process created one of the most enduring hardboiled characters of all time. By “small crime within a larger crime” I mean those tales in which a detective surrounded by oppression, chaos, and mass violence (or whatever other societal upset) hones in on the the one problem he can solve. His single-minded focus, to the exclusion of everything around him, results in either the satisfaction of using the chaos surrounding as a method of gaining revenge against the powerful, a gleeful grand guignol of getting away with murder, or a “what’s the point of even trying” moment that evokes the dramatic irony of Yossarian patching up a small wound as Snowden bleeds out.

Other examples of this genre include Alan Mattic’s espionage trilogy set in the midst of Balkanization, A Small Death in Lisbon by Robert Wilson, Dirty Snow by Georges Simenon, Gorky Park by Martin Cruz Smith, and Marek Krajewski’s Polish Corridor series, among many others. I draw a distinction between Kerr’s “small crime within a larger crime” plots and “the lead-up to the war” books of such figures as Alan Furst, based on their energy alone. Furst’s work is full of tension, waiting, a gathering of kinetic energy; Kerr’s work runs the gamut, with settings beginning in the late 30s and continuing through to the 60s, but for the most part his work takes place at the moment when an unbearable tension becomes an even less bearable action.

An endless series of cameos was one of the greatest joys of Kerr’s series. Every major Nazi made an appearance, and Bernie Gunther talked shit to all of them. It was a satisfying part of the long-term cultural catharsis of post-war fiction and paved the way (along with other mixtures of fantasy and history) for Tarantino to blow up Hitler with film stock. Watching Bernie take down Himmler, Goering, and every other shining star of the Nazi pantheon is akin to the satisfaction one feels when a smart-aleck cop or PI stands up to the wealthy and famous, except it’s unlikely any of Bernie’s real-life contemporaries would have been quite so forthcoming, and there’s a hint of tragedy in watching fiction do what real life refused to consider.

Article continues after advertisement
Every major Nazi made an appearance, and Bernie Gunther talked shit to all of them. It was a satisfying part of the long-term cultural catharsis of post-war fiction…

Historical events play the same cameo role, with Bernie, by the end of the series, serving in nearly every theatre of war, solving crimes in connection with many of fascism’s most recognizable symbols of excess, and encountering totalitarianism in all its facets. If history lays the building blocks for our understanding of the past, then historical fiction fills in the sensual and emotional landscape. I can read about the Wannsea Conference, but the film “Conspiracy” brought it to life, and Philip Kerr’s locked-compound mystery Prague Fatale…demystified it, in a way, through a simultaneously grim yet weirdly playful mixture of historical horrors and structural limitations. Kerr understood that we cannot conceive of history as a whole, only as defined segments, and the structures imposed by fiction can rein in the nonlinear strangeness of historical fact. In a way, Prague Fatale is Kerr’s most subversive novel – he places characters who considered themselves the pinnacle of civilization in the most mannered of all subgenres, a locked room at a country estate, and lays bare the violent appropriations and horrific assumptions that underpin aristocratic power.

Bernie Gunther was the quintessential hard-boiled detective, perpetually caught between a rock and a hard place. While he worked as a private detective, traditionally the purview of the marginalized (or the vigilante), his leanings politically dovetailed more with the procedural—as a former Kripo detective who remembered a time in which the Berlin police department more or less functioned as a place to solve crimes, as opposed to covering up and committing them, and as a former member of Germany’s politically center-left SDP, Gunther was able to be both rebellious hardboiled anti-hero and a more procedural-oriented liberal advocate for justice. To me, and I imagine many of the series’ devotees, this irony was part of the appeal—it was easy enough to make Bernie Gunther an outsider in his society and relatable to a contemporary audience, and in fact, you couldn’t have one without the other; no one who was an insider in Nazi Germany would be a character any of us care to relate to today.

Bernie, by design, is someone the Nazis want on their side, letting his initial refusal to cooperate with the Nazi authorities impress the reader even more than it would if the character was say, less desirable, to the fascist regime. Bernie is over six feet tall, the physical ideal of a blond Aryan, and one can imagine him quoting Groucho Marx to himself—“I wouldn’t want to be part of any club that would have me as a member”—each time the Nazis try one more time to get him on their side.

That’s occasionally one of the maddening things about Bernie’s character, too—we only adore him so much because he stands up to the Nazis, and he can only stand up to the Nazis because they want him to be their friend (or at least, put him to use), which of course gives him more opportunity to make choices in the series than any of the more persecuted characters. The Nazis look pathetic when they try to suck up to him, and that can distract (for a moment) from their menace.

Bernie Gunther’s journey was the story of Western disillusionment. Gunther’s not a cynic at heart, he’s a romantic that’s been slowly ground down into a cynic by his context. His first wife dies of the flu (and none of the women he’s interested in seem to have good prospects for their future), his beloved Weimar democracy is replaced by a fascist government, he must constantly serve those he despises, and his post-war worldview is only marginally rosier than his perspective from a Russian POW camp. The vast majority of his adult life is spent doing the bidding of Nazis, occasionally able to pit them against each other.

Bernie Gunther’s journey was the story of Western disillusionment. Gunther’s not a cynic at heart, he’s a romantic that’s been slowly ground down into a cynic by his context.

I spoke with Kerr a few years ago about the series and asked him how on earth Bernie was still (fictionally) alive. He said that, “Much of his resistance occurs inside his head. He makes jokes, but these are only ever made to people who are as cynical as he is.” Bernie is an extreme example of the typical midcentury man—he keeps his head down unless he’s speaking with those who agree with him, and he’s ever frustrated with the cognitive dissonance between who he is and who he wants to be. He’s a man in the crowd wearing what other men in the crowd are wearing, and whether that’s a uniform or a suit, he’s a part of a generation that often spoke up only in their own minds. .

Bernie Gunther fulfills many roles throughout his long tenure. By the time the war is finished, he’s become the classic “man out of time” figure, surviving long after the war has ended and his purpose in life (other than to be a pawn in the cold war) has long since ended. Even old enemies, by the end of the series, become almost-friends by dint of their familiarity – they have shared experiences with Bernie, they understand him in his context, and for better or worse, he has to live with them (at least while he’s hiding out in South America). Bernie has far more in common with an aging KGB agent by the end of the series than any young woman on the street (despite his avowed attention to all the young ladies), and later books in the series align nicely with the Rip-van-Winkle take on the The Long Goodbye (sans counterculture).

Your Guide to the Essential
Crime TV of April 2018 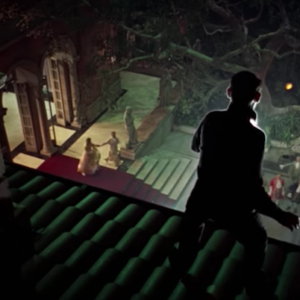 In the first decade of the twentieth century, the French writer Maurice Leblanc published The Blonde Lady, a mystery novel...
© LitHub
Back to top