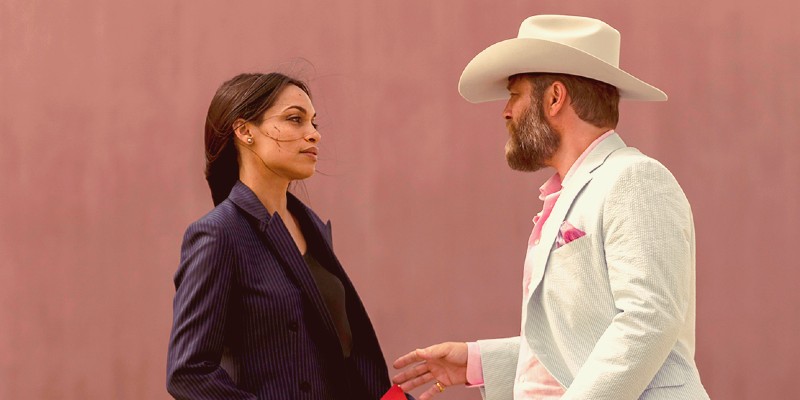 A new series returns to a bygone era of strange, slick crime fiction.

There’s a moment toward the start of episode 1 of Briarpatch, the new series on the USA network, when Allegra Dill sits down at the booth inside a bar in her hometown of St. Bonifacio, Texas, and orders gin. That might sound like fairly standard fare for a piece of crime fiction, but it’s this brief moment, one of many in the pilot episode, evocatively titled “First Time in Saint Disgrace,” that gives us viewers an early indication this is a show that will both honor the tropes of its chosen genre and have some fun with them. The waitress asks Dill whether she wants the fruity kind of gin or the dry. Dill, who is played by Rosario Dawson with a chilly charisma and an impressive collection of pantsuits, takes the question in stride. She wants it dry, but she also seems to know quite well that in St. Bonifacio any number of unexpected questions will be asked of her and a steely acceptance of the strange and surreal may benefit her chances at long-term survival. I should mention, also, that Dill is sitting down to drink with the lawyer of her late sister, a police detective who was killed by a car bomb. The bar is decorated somewhere between the fever dreams of David Lynch and Dolly Parton, complete with tinsel, taxidermy, and red pleather. There’s a heat wave going. The hotel bellhop called in sick because of Frozen 2. There is, in short, a lot going on in St. Bonifacio, Texas. Like Allegra Dill, we viewers are expected to take a certain dose of the sordid, the unusual, and the downright weird in stride. It’s a surprisingly refreshing experience. Briarpatch is a cool customer and it treats its audience much the same. 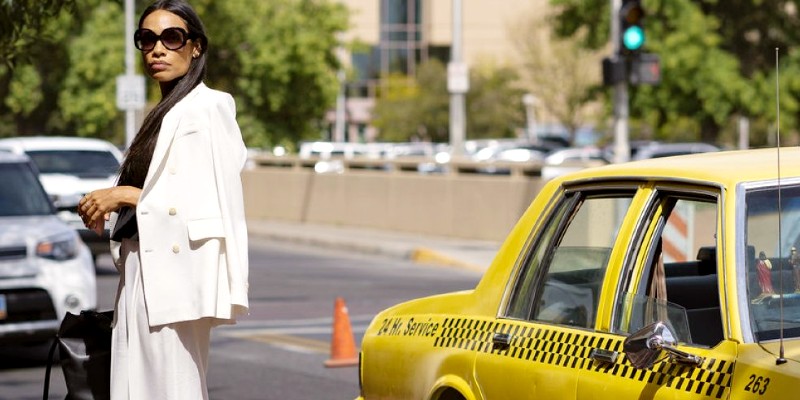 Considering its pedigree, the show had better be cool. Briarpatch is based on the 1984 novel of the same name by Ross Thomas, an author who was counted in his day as one of the best and most stylish crime novelists at work, every bit the equal of Elmore Leonard, though he was less frequently adapted by Hollywood and failed to coin any particularly memorable rules to writing. (Steven Soderbergh, who made perhaps the best of the Leonard adaptations in Out of Sight (1998), has to be counted among the show’s influences, too.) Still, Leonard is a good touchstone for those unfamiliar with Thomas’s work. With both authors, just about every character you come across is running a hustle, or would like to be running one, and crime is less a moral affair than a series of personal entanglements to be sorted out by whichever operator proves slickest. Thomas was quite the operator himself. Like the hero of Briarpatch, he was a DC politico who founded various PR firms, helped get a few presidents foreign and domestic elected, and occasionally got lured back to his hometown on some more or less noble cause. In his case, home was not St. Bonifacio—a fictional, burnt out border town in Texas—but Oklahoma, a land of fossil fuels, corruption, and lousy hotel bars.

Read More about the life and work of Ross Thomas in
A Crime Reader’s Guide to the Classics, from Neil Nyren.

Very little else is changed between the Briarpatch series and the book it’s based on. In fact, it’s one of the more faithful literary adaptations in recent memory, with nearly every major character accounted for and the scenes unfolding in much the same, carefully calibrated order Thomas conceived of them. But credit to the show’s creators, including showrunner Andy Greenwald, backed by Sam Esmail’s production company, for knowing where and how to invent.

Most notably, someone in charge had the good sense to inject Rosario Dawson in place of a male protagonist. From the pilot, directed by Ana Lily Amirpour, the filmmaker behind the supernatural neo-western A Girl Walks Home Alone at Night, we see Dawson playing Dill with an understated, world-weary swagger, all sharp edges and stark contrasts against the desert pales. When she pauses the investigation to enjoy a tamale, you better believe it’s the best in town.

It all adds up to a dizzying, uncanny world unique to the series, but still true to the source.

The show’s strangest and most delightful divergence from the source material is a zoobreak that results in animals wandering the city streets, locked in an uneasy battle with local law enforcement. In one unforgettable scene, a tiger shows up in a place where tigers are most definitely not expected. In another, one of our main characters (Jay Ferguson as the local retired spook gunrunner, Jake Spivey) is revealed as the owner of several giraffes having nothing to do with the zoo, then later breaks into a sustained, cocaine-fueled dance, one of the most exuberant moments of TV this year. It all adds up to a dizzying, uncanny world unique to the series, but still true to the source.

Briarpatch can play around a bit because it’s so comfortable in its own skin. It knows what it is: a crime story.

Somewhere along the way that came to signify, for many viewers, grim detectives, tragic backstories, and small-towns on grey coasts rocked by the disappearance of a child, or a young woman, or sometimes a spouse who recently found out something suspicious about their partner. All that brooding is well and good, and we can enjoy it in doses, but it’s also refreshing to be reminded that crime fiction, even on television, can be something different, something weirder. It can be about hustlers, schemers and world-weary operators. It can drink to excess and wear all-white pantsuits without consequence. It can even break into dance now and again.

If all that sounds like your brand of gin, better tune in soon.

It was the night of the ball and Lockwood had come alive. The floors of the corridors and ballroom had been buffed with beeswax...
© LitHub
Back to top