The following is an exclusive excerpt from The Animals at Lockwood Manor, by Jane Healey. During the Blitz, Hetty, a museum curator heads to a country manor to help preserve its collection of rare fossils and specimens. But there she encounters the boorish homeowner, and a possibly ghost, who may or may not have killed the previous lady of the manor. And she also meets the patriarch's beautiful daughter Lucy, who is just as interested in the fossils as she is their curator.

It was the night of the ball and Lockwood had come alive. The floors of the corridors and ballroom had been buffed with beeswax polish until they gleamed, and the house itself was groaning under the weight of fresh flowers in monstrously large vases, while tables covered with thickly starched linen sported a dazzling array of delicate canapés — pastries, cakes, tiny sandwiches, fruits — and servants held silver trays crowded with crystal glasses of champagne. A butler and footman had been hired to give the impression that Lockwood still had a full complement of staff, and some extra help from the village had been pressed into service that night, along with two of the more presentable groundsmen, wearing white gloves to make their hardened hands suitable for indoor work. The only element missing from the age-old scene was lights along the drive, an impossibility under blackout.

The officers at the dance were tall, and also well-polished, their uniforms neat and manners confident; they walked through a room with the easy arrogance of the well-bred, and chattered away during dances, occasionally remembering that they were supposed to ask questions, Oh, I don’t suppose you

like riding, do you? (it was surely not a coincidence that many of them reminded me of Thoroughbred horses) or Didn’t I meet you at Malcolm’s a few months ago? They made me nervous and I was cross with myself for that. I was not hunting for a husband here and I knew who I was and who I was not; I should not let them intimidate me. Perhaps it was the dress, which had felt so comfortable when I tried it on with Lucy but now felt like a costume that did not quite fit.

Lucy outshone all the women in attendance, of course, in her wine-red silk dress whose hem was slightly longer than fashionable, and with her neat white fox fur cape, and the diamond pins in her hair, which had grown out just enough to no longer look odd. Even the way it seemed like she had simply thrown on her outfit, as if she might say, This old thing with a shrug and really mean it, only added to her charm. She was certainly the most popular dance partner, whisked off her feet before she could even catch her breath, passed from officer to officer to local dignitary, with a polite smile and the occasional charming laugh as she circled the floor, skirts flowing around her legs like liquid. I was jealous of her, I could admit that, and it was not just the wealth, for I had grown up in comfortable surroundings too, nor was it her beauty; it was her ease that I envied the most, the way the ballroom looked like a backdrop in the play of her life.

on a youth with curly blond hair, and as father and daughter circled the room, him murmuring to her with a smile, his hand light on her waist as her skirts spun out, you could tell he was proud of her, and feel the warmth of those watching such a happy scene.

“His mother and his wife in one blow,” a woman nearby  s murmured to her companion with a cluck of her tongue, “and on a Sunday drive on empty roads—it beggars belief. Thank goodness his daughter wasn’t in the car that evening. What a comfort she must be to him now, and looking so much like Heloise.”

“Yes, but his mistresses are always blond, haven’t you noticed?” the companion answered archly as the woman told him to hush.

As I sipped my champagne and felt the fizz in my gullet, I felt a rising uneasiness at the scene before me.

As I sipped my champagne and felt the fizz in my gullet, I felt a rising uneasiness at the scene before me. The military band was playing a very old song and the scene in the ballroom—men in uniform or tails and women in formal gowns—seemed little changed since the turn of the century (at least if one did not look closely enough to realize that the women were not wearing heavy corsets and silly hair, that there was slightly more flesh being flashed: a back, a smooth shoulder, a firm calf). There was no hint of war here—the uniforms seemed only a smart costume, there were no missing limbs or injured faces, no blood or destruction. It was the same every- where in the country, I knew—we were waiting for war to start even though it had been declared more than a month ago, waiting for the bombs to fall. But the scene here felt too much as if we would always be waiting, that we were frozen in some kind of opulent tableau.

I made my way around the edge of the ballroom and out into the hall, stopping near the smoking room when I heard my name spoken in conversation.

“I don’t know,” a man was saying, before pausing to inhale on his cigarette. “If that’s the best the museum has to offer, the best the government can muster . . .” He laughed.

“Yes,” the man speaking with him agreed, “she’s an odd duck, terribly gauche. I asked her a polite question and she took it as an invitation to lecture me on the finer points of mammal classification.

A lie, I thought, my face flushing with shame and embarrassment, lurking in the hollow behind a tall plant. That bore of a man had asked me himself what made a mammal a mammal, and I had answered him in three sentences at most. “Yes, she certainly seems very intense. But these women in male professions are, aren’t they?”

More laughter, and I turned away swiftly, my cheeks hot and my throat tight, only to knock into someone striding past. “Steady on there,” a man in tails said, putting out a hand

to stop me from falling into him.

“Excuse me,” I said, mortified, and then when I got a better look at him, my breath hitched and a little shocked noise escaped my mouth. He was older than me by about ten years, solidly built, with dark hair and a reddish sheen to his five o’clock shadow, and I was utterly horrified to recognize him.

Then he looked up from readjusting his bow tie and the features of his face rearranged themselves into someone unfamiliar.

“I’m quite fine, thank you,” I said, my voice high and strange, and hurried away along the corridor, ducking into the small bathroom and bolting the door firmly behind me. My hands slid against the mahogany door as I leaned against it and tried to get my breath back, my heart shivering with the aftereffects of a fight-or-flight response.

From The Animals at Lockwood Manor by Jane Healey. Used with the permission of the publisher, Houghton Mifflin Harcourt. Copyright © 2020 by Jane Healey.

Crime and the City: Saigon 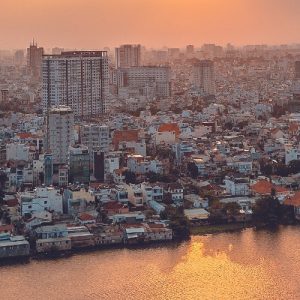