I’ve spent much of my life trying to understand China, traveling there extensively, reading widely and thoroughly on the subject, and generally badgering my Chinese friends with questions about what’s going on inside the world’s most populous country.

So when I sat down to write my Ava Lee series, it seemed natural enough to have a Chinese-Canadian as my heroine. It also made sense to make her a forensic accountant—initially working as a debt collector in Asia—since it allowed me to tap into my many years of experience doing business there. Those experiences included exposure to bribery and other forms of corruption that were standard practice.

I tried to make the books as realistic as possible. The crimes and scams that Ava pursued usually had a basis in reality and I think that in most of the books I achieved a level of authenticity. But I’ve never been as challenged as I was when it came to writing Ava’s latest outing, The Princeling of Nanjing. The book’s subject is political corruption involving a member of China’s political elite. The challenge was to create fiction that matched the reality of the marriage between modern-day politics and corruption in China.

The word “corruption” can’t be used lightly when placed in a Chinese context. This isn’t the matter of a few thousand or even hundreds of thousands of dollars exchanging hands. It involves millions and then grows larger. What makes it even slightly wackier is when those sums are juxtaposed against the remuneration Chinese leaders officially receive. For example, the Premiere—the equivalent of the US President—is paid $650 a month. The other senior ministers—all members of the Politburo Standing Committee, something akin to a US cabinet—make $500 a month. Governors of China’s 23 provinces earn $400 a month.

These senior Chinese leaders, nearly all men, have been communists their entire lives. They’ve been raised and educated to honor and adhere to the party line. There are no rich inheritances in their background.

So how is it that they’re nearly all multimillionaires or, not uncommonly, billionaires?

For example, Xi Jinping, the current Premier and supposedly an anticorruption zealot, has an estimated worth of $500 million, but it’s probably more than that. His family owns 18 percent of the Jianxi Rare Earth and Rare Metal Tungsten Company, and that alone is valued at $250 million. They also own seven properties in Hong Kong, one worth $20 million.

But Xi has a way to go to catch Wen Jiabo, the former Premier. His family’s wealth is close to $3 billion. His mother, a 90-year-old retired schoolteacher, has somehow managed to amass assets worth $120 million.

Bo Xilai, the former Governor of Liaoning, the son of the one of the eight elders of the Communist Party, and a man recognized as a princeling, had accumulated more than $2 billion in assets before a corruption charge brought him down.

And when the Panama Papers (a list of thousands of offshore bank accounts set up in Panama by many of the world’s wealthiest people) were leaked, there was a heavy Chinese presence. Xi’s family was prominently mentioned, but so were eight current and former members of the Politburo Standing Committee. Given that the committee only ever has between five and nine members and members aren’t often replaced, it could be assumed that nearly all of them were named. Not surprisingly, immediately after the Panama Papers were released, they were banned in China.

Then there’s the men who were the Head and Deputy Head of Security in China (the equivalent of the CIA). Both of them were charged within the last year with corruption. I’ll add that they were also convicted, but that’s essentially redundant because when the Chinese government charges you, you’re always convicted.

So I knew something about the extent and depth of this corruption in China when I sat down to write The Princeling of Nanjing. The princeling in my title is the very wealthy provincial governor of Jiangsu, of which Nanjing is the capital. The fact that he is wealthy and corrupt is a given. What isn’t given, and what I had to construct to make my story believable, was how he went about becoming rich, how he avoided being charged with corruption, and how my wonderful protagonist, Ava Lee, could bring him down?

The clues to the answers to those questions are included in my descriptions of the wealth of Xi Jinping and Wen Jiabo, and in the downfalls of Bo Xilia and the security heads.

One of the things I emphasize in my books is the importance of family to the Chinese. The family is, without much exaggeration, everything. There is loyalty and trust within the family unit that no government or philosophy can replace. So when Wen Jiabo was Premier, making his $650 a month, his family—children, wife, in-laws, mother—was actively using its connection to him to consolidate the family’s financial future for generations to come.

They worked as “consultants” for large multinationals wanting to open or improve their businesses in China. They were given, or bought at bargain prices, shares in companies doing business in China. And so on. I used this Wen family self-enrichment model as a guide to how my princeling’s extended family would operate. They used their father’s influence and power—for example, his control over the sale of land and the issuance of building permits—in a manner the Wen family would probably have recognized and applauded.

Incidentally, and almost comically, when the details of Wen’s wealth became public in the west, he had the temerity to claim he wasn’t happy his family had been so aggressive. His wife, in particular—who cornered the market for several precious jewels in China—was a source of his supposed discomfort. But somehow, he’s managed to suck it up and live with the $3 billion. There were no repercussions in China when the story of his family’s wealth was published.

Xi’s situation is more complex. He’s still Premier, and there are rumblings that he aspires to become Chairman of the Communist Party. There hasn’t been a chairman since Mao. In fact the Politburo Standing Committee was formed as a reaction to Mao’s one-man rule and excesses. The committee dilutes and shares power among senior party members. Xi doesn’t seem to be content with that, which has led to a lot of speculation about why, during the last year, he’s introduced an anti-corruption campaign.

Xi introduces an anti-corruption campaign while his family socks away hundreds of millions? Of course, he does, and it makes sense if you can put aside the hypocrisy of it and focus on the politics.

For example, Bo Xilai was a princeling (a term used to describe the son of one of the Chinese Communist Party’s founders. Most princelings lead lives of complete entitlement and are supposedly untouchable). As a provincial governor, Bo was no more or less corrupt than any other governor or big city mayor. But he had political ambitions that went beyond Liaoning and that brought him into conflict with Xi. Xi took him out.

The security heads, similarly, were thought to favor party members not named Xi Jinping. They were removed from their positions, tried, and jailed.

And so were another 120 senior party and government officials who were caught up in Xi’s anti-corruption purge. A purge, it must be noted, that coincided with those rumors about him wanting to become Chairman, and the fact there was internal party opposition to the idea.

Were those officials guilty of corruption? Probably, but what Chinese senior or party official isn’t at some level? Finding, charging and convicting corrupt officials is like shooting fish in a barrel. What Xi did was get rid of political opposition by using corruption as a smokescreen. This had the additional benefit of putting every other senior official and party member on notice that they could be the next person being measured for a jail cell if they don’t fall in line with Xi’s ambitions.

Xi hadn’t started the purge while I was writing the book, but Ava had already figured out that a corrupt governor wouldn’t elicit more than a few yawns from Beijing. So even after carefully tracking and documenting the extent of the family’s corruption, she knew she had to provide another reason to trigger the reaction she wanted. She found that reason, although I’m not going to share it here.

I’d like to make one last point about authenticity. Even after I’d figured out how (in some detail) the Nanjing governor’s family could amass a fortune, and I had found a way for Ava to bring him down, I was left with the problem of determining the realistic amount of money they could have improperly acquired. I chose a billion dollars as a starting point, but to confirm its feasibility, and test the plot construction, I sent my manuscript to a friend in Hong Kong who knows how things work in China, and is an expert in how to move money out of the country and into safe havens.

He thought my description of how the governor’s family accrued their wealth was entirely plausible. He also thought my cynicism about Beijing’s reaction to corruption was completely justified. But, he had trouble with my one billion dollars.

“That’s chicken feed for a governor of a province the size of Jiangsu. It has a population of 80 million,” he said. “Even if his family was taking only a tiny sliver from a small percentage of the economic activity in the province, you could go up to five billion and still be light.”

“These people are supposed to be communists,” I said, exposing my own well-worn socialist leanings.

“When it concerns their families, they’re strictly capitalists. The family is the only thing they’re really loyal to. The family’s well-being, present and future, is their priority. Everything and everyone else is expendable,” he said. “What scares me about what’s going on in the United States right now is that there’s a guy in the White House who seems to think exactly the same way.”

Ian Hamilton’s The Princeling of Nanjing is available now from House of Anansi.

Ian Hamilton is the author of the Ava Lee series. The books have been shortlisted for numerous prizes, including the Arthur Ellis Award, the Barry Award, and the Lambda Literary Prize, and are national bestsellers. BBC Culture named Hamilton one of the ten mystery/crime writers from the last 30 years that should be on your bookshelf. The series is being adapted for television. 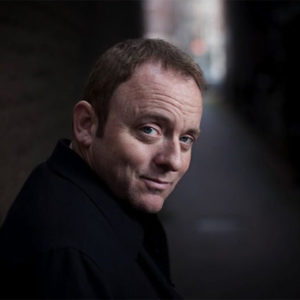 What was the first book you fell in love with? The Three Musketeers. A coming-of-age story wrapped in an adventure yarn...
© LitHub
Back to top