The master craftsman gave us more than just the 10 rules—and they're all good ones.

It’s that time of year when we celebrate Elmore Leonard. Okay, who am I kidding, we celebrate Elmore Leonard just about every week here at CrimeReads, but on October 11th we give the project a little extra oomph to honor the man’s birthday. Aside from writing some of the best-loved, most widely read and widely admired books of the 20th century—including in no particular order except the order I love them, La Brava (1983), Get Shorty (1990), Rum Punch (1992), Out of Sight (1996) Gold Coast (1980), Cuba Libre (1998), and many, many more—Leonard was also the consummate craftsman. In 2001, he famously enumerated his ten “rules for writing” in a New York Times article. The rules cut quick and deep and have proven to be a favorite source of inspiration and discipline for many a writer—aspiring, established, and all in between—in the time since.

The rules, as Leonard established them, are—

The rules proved so popular that Leonard often returned to them as years went by, and eventually they formed the backbone of a 2007 book-length discourse on writing, titled appropriately enough Elmore Leonard’s Ten Rules for Writing. The book is a master class in novel writing generally, and more specifically in the kind of smart, character-driven crime fiction that made Leonard so popular. (It didn’t hurt that Hollywood made so many good movies out of his work, either, especially in the 1990s.)

Leonard’s 10 rules have become so iconic, it’s sometimes easy to forget that he carried on for many good years discussing other nuances of literature and craft. Together, his critical analyses made up a kind of treasure map for writers of the future.

One of the high points of that legacy came in January 1998, when Leonard went to Beverly Hills for a conversation with Martin Amis. Amis, the author of London Fields (1989) and Time’s Arrow (1991) among many others, had long been a vocal fan of Leonard’s and was an important figure in bringing him the kind of mainstream literary respect he deserved. (Amis began that night by letting the crowd know he had recently returned from Saul Bellow’s apartment and had seen a number of Leonard books on the shelves.) The event, which was part of the promotional tour for the release of Leonard’s historical gunrunner epic, Cuba Libre, was held at the Writers Guild Theater, that west coast bastion of craft talk. Leonard, ever the engaged conversationalist, was full of anecdotes, illustrations, and insights into his own and others’ work. In fact, when the conversation is broken down on a craft level, it offers a number of useful principles that can be captured in a few…let’s them call them “rules.”

So here, on the annual Elmore Leonard Day at CrimeReads, we’ll remind you of this moment in crime history, when Leonard sat down with Amis and somewhere else in California Steven Soderbergh was editing Out of Sight (1998). We’ll also take the opportunity to organize the highlights of their conversation into a few rules that we like to think of as an addendum to Leonard’s famous “Ten Rules for Writing.”

Addendum 1: Pick a routine. Stick with it.

“I write every day when I’m writing, some Saturdays and Sundays, a few hours each day. Because I want to stay with it. If a day goes by and you haven’t done anything, or a couple of days, it’s difficult to get back into the rhythm of it. I usually start working around 9:30 and I work until 6. I’m lucky to get what I consider four clean pages. They’re clean until the next day, the next morning. The time flies by.”

A2. All good writing has a point-of-view.

“First of all, I’m always writing from a point of view. I decide what the purpose of the scene is, and at least begin with some purpose. But, even more important, from whose point of view is this scene seen? Because then the narrative will take on somewhat the sound of the person who is seeing the scene.”

A4. Writing in the third person lets you switch to the bad guys.

“I like third person. I don’t want to be stuck with one character’s viewpoint because there are too many viewpoints. And, of course, the bad guys’ viewpoints are a lot more fun. What they do is more fun. A few years ago, a friend of mine in the publishing business called up and said, ‘Has your good guy decided to do anything yet?'”

A5. It all starts with character, and they better be able to talk.

“I start with a character. Let’s say I want to write a book about a bail bondsman or a process server or a bank robber and a woman federal marshal. And they meet and something happens. That’s as much of an idea as I begin with. And then I see him in a situation, and I begin writing it and one thing leads to another. By Page 100, roughly, I should have my characters assembled. I should know my characters because they’re sort of auditioned in the opening scenes, and I can find out if they can talk or not. And if they can’t talk, they’re out.”

A6. Minor characters ought to assert themselves, too.

“[I]n every book there’s a minor character who comes along and pushes his way into the plot. He’s just needed to give some information, but all of a sudden he comes to life for me. Maybe it’s the way he says it. He might not even have a name the first time he appears. The second time he has a name. The third time he has a few more lines, and away he goes, and he becomes a plot turn in the book.”

A7. Bad guys also have mothers they should call more often.

“When I’m fashioning my bad guys, though (and sometimes a good guy has had a criminal past and then he can go either way; to me, he’s the best kind of character to have), I don’t think of them as bad guys. I just think of them as, for the most part, normal people who get up in the morning and they wonder what they’re going to have for breakfast, and they sneeze, and they wonder if they should call their mother, and then they rob a bank. Because that’s the way they are. Except for real hard-core guys.

A8. Appreciate the craft and you’ll never get tired of it.

“It’s the most satisfying thing I can imagine doing. To write that scene and then read it and it works. I love the sound of it. There’s nothing better than that. The notoriety that comes later doesn’t compare to the doing of it. I’ve been doing it for almost 47 years, and I’m still trying to make it better.”

You can read the complete interview, which really is worth a read, here.

And for more craft talk from Elmore Leonard, here’s a video he made in 2006 for BBC Two’s The Culture Show. Leonard drills down in particular on the work of Ernest Hemingway and his fellow crime icon, George V. Higgins.

Bickle’s Lament: The Cinematic Lineage of the Angry White Loner 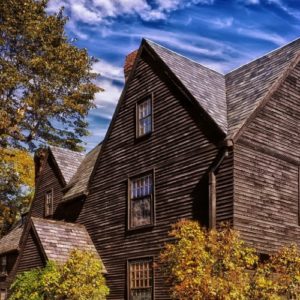 Like most writers, I hate being asked about themes in my work. I am never conscious of having a theme. An obsessive preoccupation...
© LitHub
Back to top