"All novels are mysteries"—especially in New England.

Like most writers, I hate being asked about themes in my work. I am never conscious of having a theme. An obsessive preoccupation with a subject (an old master painting, let’s say) or character type (a thief or a spiritual seeker), sure.  If I have a theme, it is perceived only later, and by someone else. My wife, for instance. “That’s easy,” she says, when the questions arises. “Things are not what they seem.” I dismissed this answer for years as too clever, but lately it strikes me as an elegant concision of what all fiction—and mysteries especially—should try to address.

In her hypnotic and haunting debut In the Woods, about a murder at an archeological site adjoining a wild patch of forest, Tana French presents two mysteries, past and present. And to the frustration of many readers (myself included), solves only one of them. Unless, of course, the solution to the second is right there in front of us and we simply resist it. The net effect is a conflicted sense of satisfaction and unease. We have discovered a killer, and plumbed the damaged psyche of our protagonist to the level his will allows. But the close approach to some magical realm of primal wonder and terror, never quite grasped, or grasped and forgotten, suppressed, torments the reader long after putting down the book. A crime is solved, but an atmosphere of impenetrable mystery remains. In an interview with Gawker, French has said that, “…it’s not murder, or even crime in general, that fascinates me—it’s mystery.”

All novels are mysteries. We read to find out what happens, even if the resolution occurs only in a character’s mind.

All novels are mysteries. We read to find out what happens, even if the resolution occurs only in a character’s mind. Most of us enjoy the occasional thriller with stock characters and swift action. Justice prevails, or vengeance does, or at least there is a finality to the story. Life is a trickier game, and more thoughtful fiction reflects that truth, while still giving us some sense of closure. Contrary to popular belief, classic mystery writers like Agatha Christie often produced murderers of sympathetic or at least conflicted character (in The Murder of Roger Ackroyd, for instance, or Ordeal by Innocence) whose motives may be comprehensible to non-homicidal readers. We can imagine knowing the person. More precisely, we can imagine having thought we knew him, or her, only to uncover hidden wounds, grudges, reckless desires—quirks of personality beyond easy understanding or judgment. It’s a short step from there to questioning your fixed idea of the flesh and blood characters in your life. People are not what they seem. Well-made tales of crime, even while resolving a particular episode of wrongdoing, reinforce this sense of human complexity.

Then there are mysteries that can never be solved, nor would we necessarily want them to be. Faith in unseen powers depends upon this mystery. Even the fiercely logical among us are often drawn to unanswerable questions. Does the soul, or some vestige of it, survive our physical demise? Are we alone in the universe? Are there ancient entities with which we once had contact, when our species was younger perhaps, or in our own childhoods, and might we, under extraordinary circumstances, come into contact with those beings again? These veiled but provocative ideas are common and very proper territory for works of crime and mystery to go wandering. If good fiction helps us resist easy answers and expands our sense of possibility, then it follows naturally—or it did for me—to edge our stories up against the supernatural, leaving room for all faiths.

I grew up in a part of the world saturated by the arcane. Salem and Danvers, where the infamous witch trials occurred, were neighboring towns, the former home to the Salem Witch Museum and The House of Seven Gables, made famous by the Gothic novel of Nathaniel Hawthorne, another local boy. The shadow of H.P. Lovecraft hovered over Marblehead, Gloucester, and Newburyport, just a few towns away. I read Hawthorne in high school, without much pleasure, but I never forgot the ghostly dread that permeates “The Minister’s Black Veil” or “Rappaccini’s Daughter,” or even The Scarlet Letter. My father put me onto Lovecraft, and I spent many a rainy afternoon creeping myself out over “The Colour Out of Space” or “The Shadow over Innsmouth.”

I was not aware of knowing witches, unless you count my Greek grandmother—a good witch if there ever was one, with the ability to cure headaches with potato slices, and to always know when one of us was in trouble. Yet the old WASP culture of my town seemed a different and mysterious world. I was a public-school kid, my classmates were the children of Irish, Italian, or Polish families who had arrived later, but now populated the shopkeeper class, police force, even the Mayor’s office. Childless Old Yankees like our immediate neighbors, who spoke with an odd accent, were a dying breed. More wealthy variants lived in unseen mansions at the end of long gravel driveways. Drinking sherry and mummifying, or so my Lovecraft-colored imagination perceived it. All of this is exaggeration, and I had friends my age—ordinary kids—from these old clans, some of whom still live in that town. But the idea of a secret and cursed collection of families with its own history and rituals, living apart from the rest of us, persisted in my imagination.

I backed into writing mysteries. If God is kind, my early efforts at novels will never see the light of day. It was not until I twinned my fascination with Eastern Orthodox faith and art with the question of who would want to steal an ancient Byzantine icon—an object at once aesthetic, spiritual, and monetary—that I created my first publishable work. False leads are pursued, friends and enemies trade places, culprits are unmasked, and the icon’s power to heal is proven, disproven, or not definitely answered, depending upon the character, or the reader. My last novel posited a portrait by Francisco de Goya so dreadful and desolate in aspect as to cause death or madness upon viewing. And death occurs, from myriad sources known and unknown, though the fascination for me was what it teaches my young art scholar Teresa about her family and herself.

My new novel, Before The Devil Fell, returns at last to those creepy fascinations of my childhood, adding a dose of Arthur Miller’s deadly mass hysteria to the mix. Will Conner’s desperate—and therefore suspect—rationality is put to the test by returning to his hometown on Cape Ann, Massachusetts. Death has come for several members of his mother’s “spirit circle,” and may be coming for Will and his witchy pal Samantha, if they persist in dredging up the past.  Just as Tana French claims to know what happened to those children in the woods, I have my own ideas about the presence or absence of demons in Will’s hometown. Like her, I cannot say what my characters cannot know, and I’m more interested in how the seeker solves the puzzle of himself. If the reader is left satisfied and uneasy, and perhaps mistrustful of the next false friend to cross her path, I’ll be well pleased. 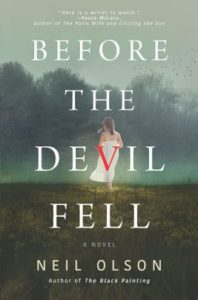 Neil Olson is the author of The Icon, a novel of art theft and family intrigue, and the play Dealers. He lives in New York City with his wife and works in the publishing industry. His latest novel is Before the Devil Fell. 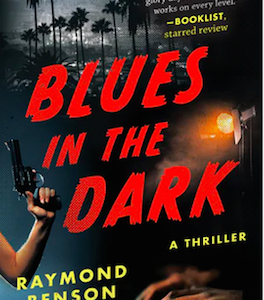 Karissa arrived at the house on Harvard Boulevard at dusk and pulled into the garage. It had been a productive day, but still...
© LitHub
Back to top