“Crime novels are comforting not in spite of their darkness, but because of it.”

Curling up with a good mystery is a comforting image: cup of tea, cozy blanket, and a book that you know will end with a satisfying solution.

But that same book will likely start with murder, and variations of shock, grief, desperation, or fear in the characters affected by it. Even the eventual justice of the denouement isn’t a purely happy ending. It’s a better ending than injustice, but a truly happy ending would be for the bad thing not to have happened in the first place. It seems incongruous, maybe even salacious or sadistic, to get entertainment out of such stories. As a reader and writer of them, I’ve questioned what it says about me that I spend so much time on death and its aftermath. The blurb my publishers most use about me is that I’m “a precise and expert analyst of the darkest parts of the human psyche.” Usually I laugh at that. Cheerful, smiley me—dark! But I’ve wondered: am I actually dark, because I’ve made crime novels my job?

I’ve come to believe that crime novels are comforting not in spite of their darkness, but because of it. They’re not about things going perfectly; they’re about creating a new, second-place vision for life after a terrible thing has taken first-choice hopes away. Justice can be part of that new hope, but it’s inherently a compromise. Justice is like a beautiful funeral: better than a terrible one, but the best would be not needing one at all.

In 2013, while living in England and editing the third novel in my crime series, I became involved in a criminal case in real life. American police had at last identified and arrested the elusive serial rapist who had attacked me more than twenty years before in Pennsylvania, setting into motion what would become a thirteen-month prosecution. I started writing almost immediately, sorting out my memories for eventual testimony in court, and distilling my new research of cold cases, statutes of limitations, and DNA evidence.

The process of writing about that experience thrust me inside of a pattern I knew well: inciting incident, challenges, resolution. I had both read and written that journey many times, and putting this real-life experience onto the page made it feel familiar right from the start, even though there were many unknowns ahead. I felt, deeply, that the difficult things that were beginning would eventually resolve and end, because that pattern was ingrained in my mind. In the emotional chaos that followed the initial arrest of the suspect, I was glad to have that shape and limit to apply to the events around and ahead of me.

It wasn’t only justice that I expected; novels cover much more than just a courtroom resolution. They’re about people, and relationships, and challenging assumptions, and changing what you wish for when what you first wanted can’t be had after all. Perhaps predictably, my true story didn’t live up to the hope of fiction. Even with a clear DNA match, the testimony of two victims, a similar previous conviction of the accused, and confident detectives and lawyers, conflicting laws about statutes of limitations cancelled the trial just days before it was to begin. We failed to achieve the expected justice in court, but I found resolution in my story nonetheless. The best books end with fresh self-understanding, sometimes surprising new alliances, and transformed hopes. All of those sparks shone brightly to me in the aftermath of my real-life case, and I was glad that through my books I’d practiced looking for them.

After the prosecution ended and my memoir of it was published, I had a contract to fulfill by writing the fourth novel in my series. It was difficult to come back to fiction. From a creative perspective, I had become spoiled by real life handing me characters, developments, and explanations; going back to choosing and controlling felt harder than searching and discovering had been. But it turns out that taking control, which I didn’t want, was exactly what made me feel proud of the work in the end. Throughout the writing I felt emotionally drained and unconnected to the work, which necessitated pushing myself in a way that I hadn’t had to with previous books. But when I wrote the last three chapters, each one a little finish to its particular subplot and character, I fell in love with it.

Writing is something I do, whereas the crime and prosecution were things that had happened to me. I had returned from reaction to action.

And by finishing it, I had become a novelist again. It was important for me to come back from my “mystery writer turns to memoir” identity by going from memoir back to mystery again. Writing is something I do, whereas the crime and prosecution were things that had happened to me. I had returned from reaction to action, and it was, in the end, a relief.

So I feel very fondly towards crime fiction. It’s a pleasant means by which to practice resilience; it gave me a hopeful lens through which to view difficult personal circumstances; and it’s a job that forces me to make choices and take control, even when I don’t feel able.

Crime fiction comforts me, not in spite of justice being a sad also-ran of a conclusion, but because of it. Much of life is made of second choices, and third and fourth and fifth choices, and of things we didn’t and wouldn’t choose at all. Some of these things are beautiful anyway. The friendships that surprised me or deepened, both in the year after being attacked and during the course of the eventual prosecution, are among the most profound of my life, and the goodness of them is tangled up with my obvious wish that the attack hadn’t happened at all.

Crime fiction is entertainment, but being entertaining doesn’t trivialize what it allows its readers and writers to rehearse. Stories of what comes after a terrible event acknowledge the reality of terrible experiences with dignity and compassion. Even just the urge for understanding and the pursuit of justice in these stories, separate from their resolutions, can be inspiring, because I well know how hard it can be to want anything at all when feeling deadened by grief or paralyzed by fear or shame. It’s not a guilty pleasure to read or write such stories; not even just a pleasure. To read or write crime fiction is to practice hopefulness, and to nurture the expectation of transformed order following destruction, somehow, even in unexpected ways.

Emily Winslow, an American living in Cambridge, England, is the author of the memoir Jane Doe January and a series of Cambridge-set novels of psychological suspense, the latest of which is Look For Her.
http://emilywinslow.com/ 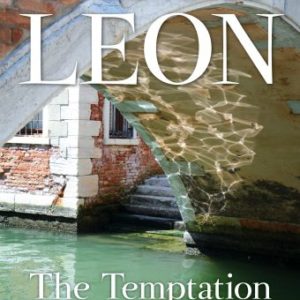 On his desk, Brunetti found what he did not want to find, a file that had been accumulating pages ever since its first...
© LitHub
Back to top