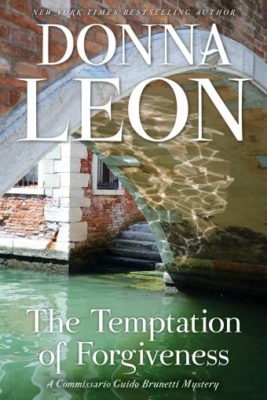 The following is an exclusive excerpt from The Temptation of Forgiveness, the latest novel in the Commissario Guido Brunetti series, by Crime Writers’ Association Silver Dagger Award winner, Donna Leon. Brunetti, the hero of twenty-seven celebrated novels, is this time charged with investigating a security breach at the bureau and the mysterious appearance of an friend found unconscious at the base of a Venetian bridge.

On his desk, Brunetti found what he did not want to find, a file that had been accumulating pages ever since its first appearance in the Questura. He had last seen it, perhaps two months ago, when it had spent a week in his in-tray, resting there in the manner of the person a friend brings to dinner, who drinks too much, says nothing during the meal, and then refuses to leave, even after the other guests are long gone. Brunetti had not invited the file, it told him almost nothing, and now he could not think of a way to get rid of it.

The dark green manila folder was used for car-related crimes: reckless driving, leaving the scene of an accident, destruction of speed cameras at the side of the road; driving while drunk or speaking on the telefonino or, far more dangerous, texting. In a city with no automobiles, crimes of this sort were seldom brought to the attention of the Venice Questura.

The folder, however, also contained cases involving the illegal acquisition of documents: vehicle registration, insurance, driver’s license, driving test results. Even though these documents had to be registered at the central office in Mestre, any illegal attempt to obtain them, as was common with any crime committed in the joined cities, was reported to the Venice police.

Most of the folder’s weight was currently due to an incident on the mainland. After reading the first report, Brunetti had been left with renewed respect for the endless creativity of his fellow man. The crime had originally been detected in the hospital in Mestre, where, over the course of only two days, five men presented themselves to Pronto Soccorso with miniature radio receivers implanted so deep in their ears that they were unable to remove them and had no choice but to go to the hospital. When examined, all of the men were discovered also to have transmitting equipment taped on to their abdomens and miniature cameras attached to their chests, the lenses peeking out through their buttonholes.

Because four of them were Pakistani and none of them spoke much Italian, a translator and then the police were called. All five men, it turned out, had enrolled in the same driving school in Mestre and had previously failed the verbal test, during which they had been asked to explain the meaning of certain road signs. The transmitters, the police later discovered, had been taped to their abdomens by men sent from the driving school, the same men who had inserted the tiny transmitters deep into their ears. During the test, the buttonhole cameras had relayed the signs the men had been asked to identify to distant helpers, who in turn whispered into their ears the meanings of the signs displayed by the examiners.

And thus they passed their exam and were given their driver’s licenses.The service cost two or three thousand Euros and had probably, until detected, managed to put hundreds of unqualified drivers behind the wheel, not only of automobiles, but of long-distance trucks and articulated vehicles.

Given that Brunetti could think of no one who had not already seen the file, he decided to keep it on his desk, like a car that could not escape a traffic jam unless its driver had the courage to slip into the emergency lane until it reached the next exit.

He sometimes thought he kept it there to remind himself of how clever people could be, at least in inventing ways to make money.

His phone rang. ‘The Vice-Questore has arrived, Commissario,’ Signorina Elettra told him in the voice she used when Patta stood near her desk.

‘I’ll be there immediately,’ Brunetti answered and got to his feet.

He found the autumnally tanned Patta in front of Signorina Elettra’s desk, speaking with her about his schedule for the afternoon. Today, Patta wore a dark grey suit Brunetti had never seen before; while he waited for them to finish, Brunetti directed his attention to it. He studied the silent caress the jacket gave to Patta’s broad shoulders, the gentle fall of the cloth of the single pleat. His glance ran down the sleeves of the jacket and fell upon the buttonholes at the cuffs. Yes, they were hand-sewn, a detail that always won Brunetti’s sartorial admiration.

Patta’s black shoes, as well, had obviously been made for him, the tiny holes decorating the toes serving only to accent the smoothness of the leather. The laces had tassels. It was difficult for Brunetti to admit how much he admired those shoes.

‘Ah, good morning, Commissario,’ Patta said amiably. ‘Do come into my office.’ Over the years, Brunetti had come to believe that Patta adjusted his pronunciation to the importance of the person with whom he spoke. With the Questore, Patta spoke an Italian of impeccable purity, more Tuscan than any Tuscan was capable of. It was the same voice he used with Signorina Elettra. His Palermitano accent thickened in direct proportion to the diminishing importance of the person with whom he spoke. Odd vowel sounds began to appear, ‘i’ landed on the end of feminine nouns; double ‘ll’s’ were transmuted into double ‘dd’s’; the ‘Madonna’ became the ‘Maronna’, and ‘bello’ became ‘beddu’. Sometimes the initial ‘i’ in words disappeared, only to scamper back into place at the sight of a person of higher station. From the clear Italian of Patta’s greeting, Brunetti judged himself to have been promoted a few rungs, a promotion good sense told him would be temporary.

Patta entered the office first and left it to Brunetti to close the door behind them. The Vice-Questore turned towards his desk but then changed direction and sat in one of the chairs in front of it, leaving Brunetti to choose one of the others.

When they were seated, Patta began: ‘I’d like to speak to you frankly, Commissario.’ Brunetti ignored the chance this remark gave him to ask how Patta had spoken to him in the past and, instead, adopted a pleasant, interested expression. At least Patta had wasted no time with preliminaries.

‘Leak?’ Brunetti asked, resisting the urge to look at the ceiling.

‘From the Questura,’ Patta continued.

Ah, that kind of leak, Brunetti told himself and wondered what Patta had in mind. Nothing embarrassing had appeared in either Il Gazzettino or La Nuova di Venezia for some time, so Brunetti was without advance warning about the information leaking from the Questura.

Uncertain how to respond to Patta’s remark, Brunetti returned his glance to his superior’s jacket and the hand-stitched buttonholes. Beauty was where you found it, and it was always comforting to see.

‘What is it, Commissario?’ Patta asked with a return to his normal inquisitorial tone.

Without hesitation, and perhaps for the first time in years, Brunetti answered honestly. ‘The buttonholes on your jacket, Signore.’

Startled, Patta pulled his right arm close to himself and stared at the cuff, almost as if he feared Brunetti intended to steal the buttons. After examining them, Patta asked, ‘Yes?’

Brunetti’s smile was easy and natural. ‘I admire them, Vice-Questore.’

‘You can see the difference?’

‘I think it’s obvious,’ Brunetti said. ‘It’s such a fine thing to see hand-stitching of that quality. Like the foam on a coffee: it’s not always there, and to most people it doesn’t matter, but when it’s there, and you see it, it makes the coffee taste better somehow.’

Patta’s expression softened, and Brunetti had the strange sensation that the Vice-Questore was relieved, as at the sudden appearance of a friend in a room where he expected to see only unfamiliar faces.

‘I’ve found a tailor in Mogliano,’ Patta revealed. He glanced across to Brunetti and said, ‘I can give you his name if you like.’

Patta straightened his arm and pulled at the cuff of his shirt, then sat back in the chair.

Brunetti realized this was the first personal conversation they’d ever had–two men speaking as equals—and they were talking about buttonholes.

‘These leaks, sir: could you tell me more about them?’

‘I wanted to speak to you, Brunetti, because you know people here,’ Patta said, reminding Brunetti that this was still the old Patta, for whom any information about the inner workings of the Questura was part of the Delphic Mysteries.

Brunetti waved a hand in the air, to dismiss those hidden truths Patta believed he knew or perhaps to summon them from the vasty deep.

‘They talk to you,’ Patta insinuated. Hearing Patta’s suspicion relaxed Brunetti and told him that, though the subject might be new, the old, adversarial order had been restored. He tossed away his momentary warming towards Patta and returned to his native good sense.

‘What is it you think they’ve been talking about, Vice-Questore?’

Patta cleared his throat with a small noise. ‘I’ve heard rumours that some people are displeased with Lieutenant Scarpa,’ Patta said, struggling, it seemed, to keep indignation from his voice. Then, more calmly, as though he considered it of lesser importance, he added, ‘It also seems that someone has been talking about a person brought in for questioning.’

Get a grip here, Brunetti told himself, considering the remark about Scarpa. He despised and distrustedthe Lieutenant and made little attempt to hide it, yet Patta seemed oblivious to this, as he was to so much else at the Questura. Best to demonstrate surprise; outrage would be too much. Perhaps with a bit of curiosity? But what about the leaks?

‘Are you at liberty to say where you got this information, sir?’

‘Both were reported to me by the Lieutenant himself,’ Patta replied.

‘Did the Lieutenant reveal his source?’

Patta hesitated a moment but then said, ‘He told me it was one of his informants.’

Brunetti rubbed at his lower lip with the fingers of his left hand. He allowed a long time to pass before he said, ‘I find it strange that an informant would learn something about the Questura that no one here seems to know about.’ After a brief pause, he suggested, ‘You might ask Signorina Elettra.’

‘I wanted to speak to you first,’ Patta said without explanation.

Brunetti nodded, as if he understood Patta’s reasoning. He probably did: Patta would be hesitant to bother Signorina Elettra with a suspicion that might be groundless. ‘Is this informant a reliable source?’ Brunetti asked.

‘How would I know a thing like that?’ Patta demanded. ‘It’s not my business to deal with informants.’ The instinct to institutional survival stilled Brunetti’s tongue. He waved his hand and nodded in agreement, then said, ‘Someone might have invented this rumour to create friction between the Lieutenant and his colleagues. There’s no doubt that the Lieutenant has won a place in the opinion of his fellow workers.’ Brunetti paused minimally and then added, while Patta was working out his precise meaning, ‘I’d discount the reports, sir. That is, if you’re asking my opinion.’

Did Patta stir uneasily in his chair? Brunetti wondered. He waited for what he considered a respectful period of time, then got to his feet. ‘If there’s nothing else, Vice-Questore, I’ll go back to my office.’

Excerpted from The Temptation of Forgiveness, copyright © 2018 by Donna Leon and Diogenes Verlag AG, Zurich. Reprinted with the permission of the publisher, Atlantic Monthly Press, an imprint of Grove Atlantic, Inc. All rights reserved. 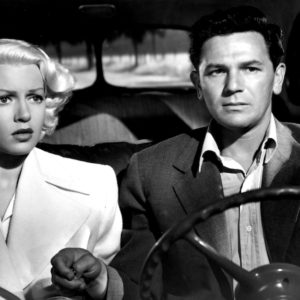 Laura Lippman on James M. Cain's Transgressive Noir The Christmas I was 21, my sister gave me six of the sexiest paperbacks I had ever seen, James M. Cain's The Postman Always...
© LitHub
Back to top