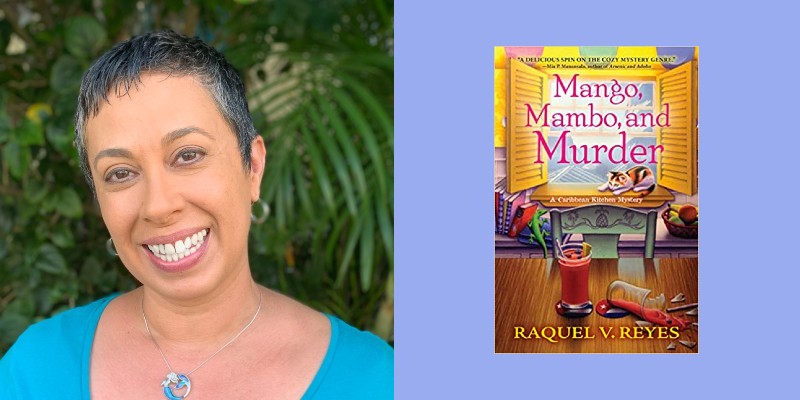 The author of Mango, Mambo, and Murder talks with Richie Narvaez about growing up in the South, the use of Spanish in English-language fiction, and helping marginalized writers.

In Mango, Mambo, and Murder, Cuban-American food anthropologist Miriam Quiñones-Smith turns amateur sleuth when the socialite sitting next to her faceplants into a chicken salad. With this tale, the first of her Caribbean Kitchen Mystery series, Raquel V. Reyes takes the comforting cozy recipe and tosses in her own sofrito, adding Latine flavor to an increasingly diversified genre. The book earned praise from the New York Times, which said “it executes its mission — mixing standard tropes, memorable characters, the importance of family and murder in unexpected quarters — with panache,” as well as an Agatha Award nomination. A sequel, Calypso, Corpses, and Cooking, is due out later this year. Reyes has long been heavily involved in the crime fiction community and currently serves as co-chair of Sleuthfest and at-large director of Mystery Writers of America. In this Q&A, Reyes gets to dish about growing up in the South, her path to becoming a crime fiction writer, the use of Spanish in English-language fiction, and helping marginalized writers.

RN: You’ve mentioned before how your upbringing was like an I Love Lucy episode, with a heavily-accented, Cuban dad and a red-headed Southern mom. How did that upbringing shape you into becoming a writer?

RR: Not belonging entirely to one culture or another made me an observer of both. I was constantly watching, analyzing, and cataloging behaviors and customs so as to fit in. In truth I never did master fitting in and now that I’m older it matters less. As a young person, I straddled the two cultures a little like the Colossus of Rhodes. I had one foot in the red clay of the Appalachian foothills and one foot in the Caribbean Sea. Now, the only part of my Southern heritage that I thoroughly hold to is a snobbery about cornbread, coleslaw, and pulled pork barbeque. It is usually best found in a one stoplight town from a homemade fifty-five gallon drum smoker that has setup shop in a church parking lot. But back to how it shaped me as a writer—the South has a wonderful tradition of oral storytelling and my ears were listening.

RN: I know you’re passionate about social issues, and justice, equity and compassion. How does that tie into your choice to write crime fiction, and why cozies?

RR: Here is a confession. As a very young child I had a recurring premonition that I was going to turn a corner and find a dead body—like recently murdered. I have no idea why, but it was very vivid. I can still conjure the memory and get prickly skin from it. Who really knows how the mind of a small child works? But they do sense things that they cannot always articulate. I think I knew the world was dangerous. At that time not because I was a child or a female, but because of the color of my skin. I spent my formative years splitting time between northwest Georgia and Miami. When my white grandmother took her brownish grandchild into a roadside store that had Klan paraphernalia, it didn’t bother her, but I felt the eyes of the proprietor burning into me. When she showed me the fingerprints of enslaved African children in the bricks of a Charleston building, I knew that I was closer to that child than I was to the building’s owner because of the one drop rule. And then in Miami when my friends and I stopped speaking Spanish in public because we’d be labeled Marielitos—criminals let loose by Fidel.

In my youth, I was very aware that the color of skin and/or my Spanish name (both things outside of my control) put me in potential peril. When my friend in high school came out to me as gay but swore me to secrecy because of the stigma of AIDS, I understood on a cellular level. So, my passion for social justice and equity is about the right to exist free from worry about the color of your skin, the language that you speak, or the gender of the person you love.

I think I gravitated to mystery and crime fiction because I found protagonists that I could identify with. The sleuth in cozy/traditional is an insider-outsider. They have access but perspective. As a young person, I had a keen interest in fine art and archaeology. When I found Elizabeth Peter’s The Seventh Sinner on a library shelf, I was hooked. Roman catacombs, pagan traditions, a group of scholarly students, and a librarian—it was like the book was made for my proclivities. While I didn’t see my Latinidad reflected, I did see myself in the passion for cultures and the pursuit of answers. When I began writing fiction seriously, there was no quibbling about the genre. I was going to write what I loved to read. And I was going to have the protagonist look like me.

RN: You self-published your first mystery, Jeweler’s Mark, starring diamond appraiser and amateur sleuth Gigi Santos. And now your new book is with Crooked Lane. What do you think that says about the viability of Latinx-themed books in the marketplace?

RR: Wow. You are digging up all of my past in this interview. Hmm. Confession time again.

I self-published because I was frustrated about not seeing any Latina representation in cozies. And I was about to have a hysterectomy certain they would find cancers like the kinds that took both my mother and my stepmother. Jeweler’s Mark was finished. I’d shopped it around. It had gotten a lot of nibbles, but no bites. There was a glut of same-same being published yet there was this lip service to “diversity.” So, I hired an editor and designed a cover and self-published for fear it might be my only chance. Luckily, I survived the surgery, but my career as an indie-author did not. My heart is not into the nitty gritty of sales and self-promotion. About a year or so later I unpublished. I loved Gigi Santos and her BFF, Lourdes. I loved the world I’d built for them, but traditional publishing rarely touches a previously published manuscript.

So, I started a new project; at the time it was called the Village Prima Donna. I was still frustrated at the lack of representation, but I was trudging on. This was my pony, and I was going stick with it kind of thing. But to be honest I was on the verge of giving up. I’d almost decided to stay in the community as an advocate but to stop writing. And then a series of things happened in the book world: Crime Writers of Color, the implosion of RWA, We Need Diverse Books, among other things. Suddenly, the lock on the gate was off. That’s a simplified version of how the Village Prima Donna became Mango, Mambo, and Murder. The response to the book has been positive. It is not only Latinx/e readers who are identifying with the story and characters.

You asked about the viability of Latinx-themed books in the marketplace. They will be viable if they are visible. They will be visible if publishers put advertising and publicity dollars behind them.

RN: You and I have the honor of being in the wonderful anthology Midnight Hour. But one review criticized both our stories for “language not easily translated in context.” And with Mango on Amazon and Goodreads, any and every negative review says something about “too much Spanish.” How does this kind of stuff make you feel?

RR: It hurts that some (not all) readers will discount our stories because they see a few lines of Spanish in them. I want the use of the occasional “foreign” language (especially Spanish) to be normalized in American-English fiction. That is why I insist that my Spanish not be italicized. And I am very happy that is becoming standard practice. American Literature has had a love affair with the French language. Readers don’t bat an eye at the use of a French quote here and there. Right? So why Spanish? I think it has bad press and politicization that it doesn’t desire.

The reader needs to trust the writer. We are not hiding anything from them or trying to fool them. The translation is in the context, and/or it isn’t important.

RN: You’re co-chair of Sleuthfest and at-large director of Mystery Writers of America. In an age where writers can network via social media and learn via YouTube, without professional writing organizations, how can groups such as MWA, Sisters in Crime, ITW, and others remain relevant? How can they help marginalized writers?

RR: Thanks for mentioning SleuthFest, which is hosted by the Florida Chapter of MWA. The writing craft conference is near and dear to my heart. I do not have an MFA in creative writing. I got the DIY version by attending conferences and participating in workshops by organization like MWA and Sisters in Crime.

After two years of existing exclusively on a virtual diet, I think we all recognize the benefits of in-person socialization. I think many organizations will go forward in some hybrid form. That is positive growth that invites inclusivity to members and guests that might have been excluded due to distance, mobility, and/or finances.

I think of professional organizations as a union. SinC and MWA are the unions that I belong to. They are the people who will have my back. They are the ones keeping an eye on the publishing industry and making sure the writer gets what they deserve. Yes, I am talking contracts and legal stuff.

I think they help all writers who want careers as authors. And for marginalized writers to no longer be marginalized, we need to be bold and present in those unions. Join, stay, take up space, volunteer for leadership roles. It only gets better for all of us when all of us are at the table. 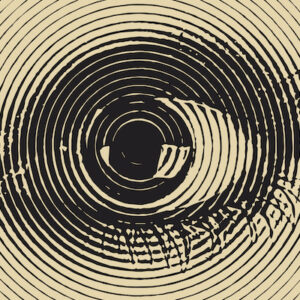 One of the most valuable qualities of books is their ability to introduce readers to perspectives very different from their...
© LitHub
Back to top