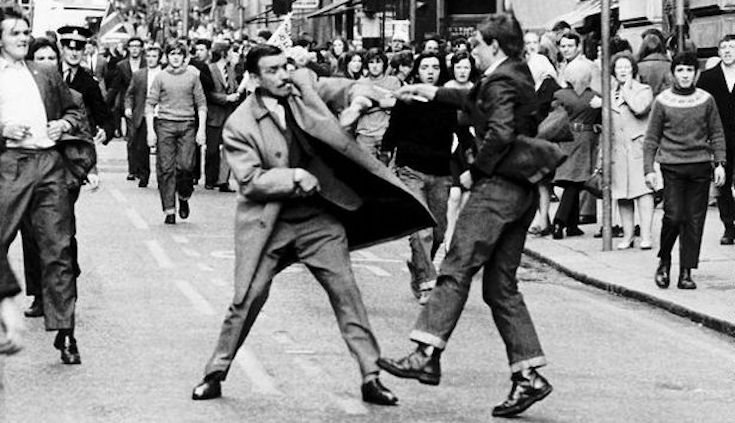 From Gangsters to Gorbals, a City With a Hard-Earned Reputation

Few cities come with a reputation as hard as Glasgow’s. It’s the home of the “Glasgow Kiss” (a forceful head-butt to the bridge of the nose) and the legendary “Glasgow Smile” (an infamous gang wars tradition of making a cut from the corners of a victim’s mouth up to the ears, leaving a scar in the shape of a smile). Glasgow’s tough, Glasgow’s in your face; Glasgow’s hard as nails. However, it’s also the original “no mean city” (meaning do not consider it obscure or insignificant). Glasgow’s a very friendly town if you manage to catch it in the right mood; it enjoys a joke; likes a drink. It’s also a city that’s produced some pretty unbeatable crime writing.

We’re going to start with William McIlvanney, and end with him too. No lesser an authority than Ian Rankin (a son of Edinburgh—a city that in Glaswegian opinion is “all fur coat and no knickers”,) dubbed McIlvanney “The Godfather of Tartan Noir.” Like Glasgow, McIlvanney (who sadly died in 2015) was no-nonsense, sometimes terse, redoubtably socialist and not a great one for self-promotion. I met him at the 2014 Getafe Negro noir crime-writing festival in Madrid where he was the main attraction. What did he think of that Tartan Noir Godfather moniker? “Too twee…” he said. “Did you ever see a Glasgow hardman in a tartan kilt and sporran sticking the head in on a rival?” The answer of course is no.

McIlvanney is the shadow over the shoulder of all Glasgow crime writing. He certainly influenced the incredibly gritty Scottish TV series Taggart. The first few series (there have been, remarkably, over a hundred episodes), in the early to mid-1980s, were incredibly noirish and portrayed a Glasgow not in its Sunday Best. Taggart was initially written by Glen Chandler—no relation to Raymond but somewhat of a Scottish cousin in literary terms. And you can still feel McIlvanney’s influence in contemporary Glasgow crime writers such as Alex Gray and her Detective Lorimer series, which began in 2009 with Near Somewhere Else. Lorimer is currently on his 14th outing in Still Dark (2017), traumatized by what he has seen in the city and questioning his future in the police force.

Mclvanney set the bar seriously high with his Glasgow-set Jack Laidlaw trilogy: Laidlaw (1977), The Papers of Tony Veitch (1983) and Strange Loyalties (1991). Laidlaw is pure Glasgow noir, a Detective Inspector in a force as riven with violence and sectarianism as the city it patrols. The Laidlaw novels are not mysteries—we invariably know who the killers are; men of extreme and often inexplicable violence who must be tracked down and removed from society. The books are pursuits through the city, a recognizable Glasgow, but one also hyper-realized with its grittiness and underbelly accentuated. “A Glasgow sun was out, dully luminous, an eye with a cataract”—that’s the way Laidlaw sees his hometown.

Glasgow’s crime specificities invariably go back to its origins as the great Victorian “Second City of the Empire:” industrial, working class, sectarian. In 1935 H. Kingsley Long and Alexander McArthur published a book that was to become a legend—No Mean City: A Story of the Glasgow Slums. It was an account—fictionalized but based on reality—of the city’s worst tenements, the Gorbals. It’s the story of the city’s infamous hard men and razor gangs between the wars; it’s the tale of Johnnie Stark, son of a violent father and a downtrodden mother, who becomes Glasgow’s “Razor King.” The book shocked many when it was published: some called for the police to crack down hard on the city’s gangs; others for the cause of the trouble, the Gorbals slums, to be demolished. Ultimately both things happened. An account of the rise of the gangs, the slums that bred them, the anger, religious sectarianism and politics that fueled them, and their repression is well told in Andrew Davies’s City of Gangs: Glasgow and the Rise of the British Gangster (2014), by far the best of the many contemporary books about Glasgow’s gang culture.

Recently writers have been interested in the city just after the Second World War. Glasgow and the shipbuilding center of Clydeside took a pounding from the Luftwaffe during the Blitz; post-war slum clearance partly got to grips with historically atrocious living conditions but was also the genesis of some of Britain’s worst and most corrupt postwar urban planning; and the postwar austerity seemed to go on longer in Glasgow than the rest of the country. That’s certainly the sense you get from Gordon Ferris’s Douglas Brodie Quartet—The Hanging Shed (2011), Bitter Water (2012), Pilgrim Soul (2013) and Gallowglass (2014). Brodie was a Glasgow beat cop in the 1930s fighting the razor gangs and the hard-men. Then he went to war. Now he’s back in his hometown, a reporter and up to his neck in crime and corruption in the austerity age. It’s a dark Glasgow, largely thanks to the coal-fired city sending up black smoke that blocks out the sun. It’s a Glasgow of shabby, soot-smeared tenements, damp homes worsened by the constant rain, men broken by hard labor, too many ciggies, too much whisky, trying too hard to be the “big man” all the time. But it’s also a city of contrasts—the brighter and less oxygen-deprived West End, the dealmakers of the City Chambers and the law courts, the hacks of Glasgow’s ever-voracious tabloid press. Brodie has to navigate these worlds. Ferris’s series was phenomenally popular in the UK: The Hanging Shed sold 150,000 e-books in six months, making it, in 2011, Britain’s first Kindle bestseller.

Hard on the heels of Gordon Ferris has been Craig Russell and his Lennox series,  almost equally popular. Lennox is a Canadian ex-serviceman who, for some strange reason even he’s not sure about, decided he liked Glasgow and stayed on after the war. Artery-clogging fried breakfasts, smoky pubs, snooty landladies and gangsters who enjoy a bit of torture have not encouraged him to head back home to fresh air and the Canadian prairies. The Lennox series—Lennox (2010), The Long Glasgow Kiss (2011), The Deep Dark Sleep (2012) and Dead Men and Broken Hearts (2012)—is set in 1950s Glasgow. But not that much has changed since the war. The skies are still coal-dust dark, the pubs thick with tobacco smoke, the tea strong and sweet, and the violence quick and random, but the cars are smarter and more people have televisions. Lennox takes a tour through the city’s underworld working for, against or (just occasionally) with, Glasgow’s Three Kings, the crime bosses who run the city, namely “Handsome” Jonny Cohen, “Hammer” Murphy and Willie Sneddon, “King of the South Side.”

Criminal legends live long in Glasgow. I lived in the city for a couple of years at the end of the 1980s and the local tabloids regularly featured stories on gangsters that had been around since the late 1950s and 1960s. They were known scarred “faces” in the dodgier pubs and illegal clubs all over the city in those days when Glasgow was just about to become a “European City of Culture” and pitch headlong into a certain level of gentrification. In the 1990s parts of the town saw an upswing, but it doesn’t take long to find the disadvantaged and the poor on the city’s run-down “scheme” estates or housing projects.

Bible John is a legend that lives on in Glasgow. He’s never been caught—a man who picked up and murdered three young women from the city’s Barrowland Ballroom in the late 1960s. The speculation goes on. Every so often a new clue seems to appear, some DNA is tested and then doesn’t pan out. And so a nod to Ian Rankin’s 1997 novel Black and Blue that speculates on elements of the Bible John case and puts John Rebus on the cold case.

Finally, but with proper respect paid, Denise Mina, the boss of Glasgow crime writing. Her most recent first: The Long Drop (2017). Those crime legends really do persist in Glasgow—The Long Drop is the story of Peter Manuel, Glasgow’s first confirmed serial killer who murdered seven people between 1956 and 1958 across the West of Scotland. Manuel was hanged (known as “the long drop”) at Glasgow’s notorious Barlinnie Prison in 1958, one of the last men to be hanged in Scotland. The book is essentially one long pub crawl through 1950s Glasgow: the worst knock-down-and-drag-out bars of the Gorbals, the gangster-only drinking dens of the city center, sleazy strip joints and private nightclubs where low life and high life collide. All meticulously recreated as we get closer to the wicked truth of Peter Manuel.

The Long Drop is just an interruption for Mina, a wee break from her regular work of creating amazing serials. The Garnethill trilogy (Garnethill, Exile and Resolution—1998, 2001 and 2002 respectively) captures the contemporary city and gets very dark. Then Mina’s three Patricia “Paddy” Meehan novels, starting with Field of Blood in 2005, recreate the city on the cusp of rejuvenation and gentrification but still, in the 1980s, getting a serious kicking for daring to defy Margaret Thatcher. Glasgow nearly expired from the beating it took in the 1980s—the shipyards and industry shut and created mass unemployment; the Conservative Party seemed intent on punishing the city for defiantly and repeatedly voting Labour en-masse. It wasn’t easy being a woman reporter on a newspaper in the 1980s; whatever your gender, working on a tabloid it wasn’t easy to avoid becoming a drunk and a heart disease victim; and, in Paddy Meehan’s world, the horrific crimes just keep on coming.

More recently Mina has been developing the Alex Morrow novels, starting with Still Midnight in 2009 and most recently with The Red Road (2013) and Blood, Salt, Water (2014). The Alex Morrow books have kept on getting better and better but are difficult to describe. So, as promised, we’ll come back to William McIlvanney—the Godfather. Alex Morrow, like McIlvanney’s Jack Laidlaw previously, polices a city where the line between the honest law-abiding citizen and the hardcore criminal is so blurred as to become almost indistinguishable. Within communities, families, lovers—just who is good and who is bad is problematic. Just about everyone in a Laidlaw novel is tortured in some way—by their parents or loved ones, their church, school or institution of choice (police, army, uncaring employer), the restrictions of their class and allotted place in society—tortured by the city of Glasgow itself and its lack of forgiveness. There’s a lot of Laidlaw in Alex Morrow; the simplistic notions of good and bad, black and white, fair and unfair, just aren’t adequate or relevant in their worlds. Alex and Jack? They’re family, of a kind, separated by a few decades, but they’d recognize each other immediately over the crime scene tape.

Yes, as it’s always said ad nauseam (and probably to many Glaswegians’ intense annoyance), Glasgow’s hard—and hard to beat when it comes to crime fiction. 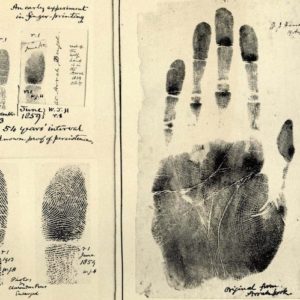 In October 2014, my Facebook feed filled with mentions of a podcast called Serial. I was traveling abroad at the time, and so, while...
© LitHub
Back to top