On the Criminal Legacy of Colonialism, and So Much More

The Indian sub-continent is not short of good candidates for our Crime in the City series. Expect detailed visits to Bombay (Mumbai) and Delhi soon, with some passing mentions of other Indian locations, such as the Himalayan foothills city of Simla, now definitely on our radar thanks to the UK TV series Indian Summers, where the scions of the British Raj are not above bumping each other off.

But let’s start with Calcutta (now officially renamed Kolkata), the capital city of West Bengal state, whose name is invariably preceded by the rather unattractive “Black of Hole of….”, even though the “Black Hole” was an 18th-century dungeon in the city’s Fort William rather than a description of the entire metropolis. Still Calcutta looms large in the history of colonial India—the British entry point to the vast Bengal market; a major centre of the East India Company’s pernicious opium trade (detailed so well recently in Amitav Ghosh’s Sea of Poppies, 2008, a book in which any number of crimes occur); and later a centre of the Indian independence movement. A city of infinite criminal possibilities—Kipling wrote in his 1886 poem, A Tale of Two Cities, dedicated to Calcutta:

Palace, byre, hovel – poverty and pride
Side by side
And above the packed and pestilential town
Death looked down.

Literary descriptions of Calcutta often tend towards the clichéd—that “black hole” moniker is hard to shift—but the city is the epitome of the teeming, boiling, raucous city of the East. The veteran travel writer Paul Theroux took it on in his 2009 A Dead Hand: A Crime in Calcutta, which is a novel (narrated by a blocked and despondent travel writer!) centered around a dead body in a cheap hotel, a terrified guest who wakes up to find the body on the floor of his room and the mystery of how it got there. Theroux’s narrator describes Calcutta as, “decaying before your eyes in the sweltering months before the annual monsoon.” The city (and particularly its ancient and cramped Chowringhee district) can “creep on your skin like the itch you experience when you empty an overfull vacuum cleaner’s dirt bag, packed with hot grit and dead hair and dust bunnies and dander, and you gag and scratch at the irritation and try to claw the tickle and stink off your face.” Not great tourist board promotional copy, but then we are concerned solely with the city’s literary underbelly.

There is a long tradition of Bengali detective fiction stretching back over a century, although sadly hardly any of it has been translated into English. Much of it deftly intermingles Bengali society and traditional interactions with Sherlockian logical detection techniques (an almost universal love of Holmes is one positive legacy of British imperialism in India). Nihar Ranjan Gupta wrote an astounding 80 books featuring his detective Kiriti Roy. A spell in England was spent largely devouring the work of Agatha Christie and Conan Doyle whose novels inspired Gupta’s own pipe smoking, hat wearing detective character. Bollywood has adapted several of the books, but unfortunately there are no English-language versions. There are a few translations available of Sharadindu Bandyopadhyay’s detective stories from the 1930s. Bandyopadhyay’s character, Byomkesh Bakshi, termed himself a Satyanweshi, a “truth seeker.” Byomkesh Bakshi became a long-running Indian TV show.

Possibly the most widely translated Bengali crime writer of an older generation is the Calcutta-born Satyajit Ray. This is probably because he is the best-known Indian movie director internationally. Less well known is that Ray created the private eye character, Feluda. The Sherlock Holmes-style detective stories are aimed at children. Ray was a keen Sherlockian from his school days and has one story where Feluda, a Bengali boy, visits London’s Baker Street. They’re cerebral, largely non-violent adventures featuring young Feluda and his pals solving mysteries while on adventures a la Tintin (Ray was also a keen reader of Hergé). Indeed Feluda’s only vice is that for a boy he smokes rather a lot of cigarettes! The Feluda stories have been reissued as comic books and turned into movies and TV series.

Ray, Bandyopadhyay and the other Bengali crime writers of the 1930s and 1940s were born, raised and spent their lives around Calcutta. The English writer HRF Keating was born, raised and spent all his life 5,000 miles away in England. Still, Keating is a well-known name to many Indian crime-writing fans for his popular Inspector Ganesh Ghote series. Ghote (pronounced “Go-tay”) is an unlikely Bombay detective; he’s timid and gets rather nervous when questioning people. But he is tenacious. Ghote first appeared in 1964 in the novel The Perfect Murder. Since then, and until his “retirement” in 2009, Ghote has had over 25 cases to solve. In Bribery, Corruption Also (2009) Inspector Ghote’s wife inherits a house in Calcutta and so the detective departs his usual stomping ground. Once in Calcutta he inevitably stumbles across a morass of political corruption in the Bengali capital not dissimilar to what he is used to in Bombay. The Ghote novels are phenomenally popular in India and Keating (who died in 2011) became a star there. However, the author (who was regularly praised in reviews in both the Indian and British newspapers for his “sense of place”) never visited India until a decade after he started writing the series, relying on his schoolboy atlas and the resources of his local library in London. Finally, his publisher offered him a plane ticket to Bombay and Keating thought he really should go and take a look at where he’d been living in his head for ten years.

More recently, but also based in London, MJ Carter was a historian before she created the Blake and Avery mystery novels. The first in the series, The Strangler Vine (2014) was extraordinarily well reviewed and sold amazingly well. It’s not surprising given that it’s set in a highly atmospheric 1830s Calcutta with William Avery, a young officer in the East India Company attempting to track down a disgraced poet lost in the jungles of central India, accompanied by the dissolute and mysterious Jeremiah Blake. It is an old fashioned “ripping yarn” that manages to be thrilling, but also to cast a suitably condemnatory eye on British imperialism in India. One reviewer wrote, “The Strangler Vine represents what must be a lifetime spent reading and soaking up Indian history and geography.” There’s now a second Blake and Avery book, The Printer’s Coffin (2016) that brings the investigative duo from Calcutta back to a London enflamed by the revolutionary Chartist movement.

In recent years though local Calcutta crime fiction writers are beginning to find translation deals and at least a few books are appearing in English. Kalyan Lahiri is Calcutta born-and-bred and took early retirement from his job as a successful banker to become a full-time crime writer. The Kolkata Conundrum (2016) is the first in a planned series featuring detective Orko Deb. Deb is perhaps unique in the annals of modern crime fiction in that he is not in a failing marriage, doesn’t drink or smoke too much, is not embroiled in a major row with his boss, isn’t corrupt or even mildly in debt. What is interesting about Deb is that he is newly arrived in Calcutta from the countryside and so Lahiri is able to give both Deb, and by extension us, a tour of the city.

Abheek Barua’s City of Death (2016) is an altogether bleaker portrait of Calcutta—moody in the extreme, the novel doesn’t pull any punches in its descriptions of violence or the often depressing effects of living in a large metropolis—traffic, rudeness, loneliness while feeling claustrophobic in such density. Sohini Sen is a cop stuck in a desk job; she’s depressed, hitting the vodka a little too hard and prone to suicidal thoughts. But when a woman from a prominent Calcutta family is found beheaded she is brought back to the centre of the Crime Branch to head the investigation. Sen is far less in the Sherlock Holmes tradition and far more an Indian sister to western female cops like Lynda La Plante’s Jane Tennison (of Prime Suspect fame)—indeed the two would be quite likely to bond at an AA session.

And finally a novel set in a Calcutta of the past that is getting rave reviews in the present—Abir Mukherjee’s A Rising Man (2016). Mukherjee was born and raised in Scotland and now lives in London, but A Rising Man is all Calcutta—1919 Calcutta to be precise, where Captain Sam Wyndham has taken a job with the local colonial police force. He’s barely unpacked before a senior official in the Raj is killed and dumped with a note stuffed in his mouth instructing the British to leave India… or face the consequences. Wyndham and Sergeant ‘Surrender-not’ Banerjee set about the case. A Rising Man is a fantastic evocation of colonial-era Calcutta and a very fast moving thriller. New fans of Mukherjee will be happy to know that Wyndham and Bannerjee’s second case, A Necessary Evil, is published in June.

The Daughters of Crime Fiction Are Getting Tough on Bad Dads 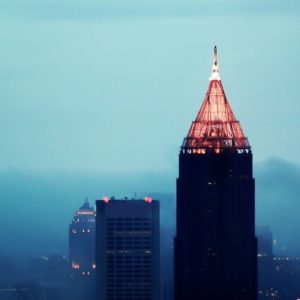 There is perhaps no more image-obsessed city in America than Atlanta, Georgia—the city adopts and drops slogans about itself...
© LitHub
Back to top